Students Speak Out about Hate in Their Schools
Votes

Students Speak Out about Hate in Their Schools

“A Space for All: A Conversation about Ending Prejudice in our Schools” forum held at the Temple Rodef Shalom. 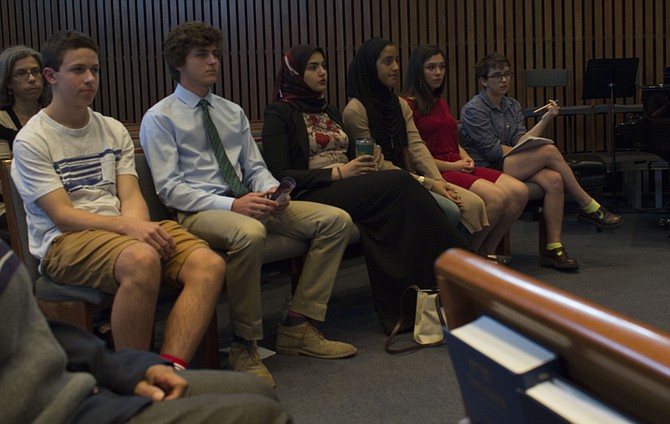 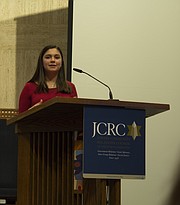 McLean High School student Havi Carrillo-Klein speaks out about her experience with anti-Semitic harassment from classmates. 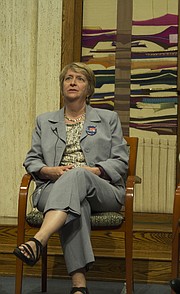 Mary Ann Panarelli, director of intervention and prevention services for Fairfax County Public Schools, receives a question from a parent who said he was pulling his children out of McLean High School after a series of anti-Semitic incidents. 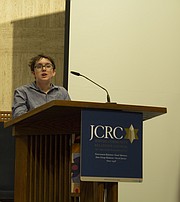 Carmen Beadie, a gender-nonconforming junior at McLean High School, spoke out against hate endured in school regarding gender identity and expression, which is not protected under federal law.

Classmates used the Nazi salute, exclaiming “Heil Hitler” to greet her. The next day, other classmates threw pennies at her, implying Jewish people like her are cheap and gestures reminiscent of the Holocaust are a joke.

“If this is happening to me, it’s probably happening to other people,” Havi Carrillo-Klein, a junior at McLean High School, said of her experience of anti-Semitism.

The Jewish Community Relations Council (JCRC) of Greater Washington and the Temple Rodef Shalom of Falls Church hosted “A Space for All: A Conversation about Ending Prejudice in our Schools” forum with students to talk about their recent experiences of hate and bias in Arlington and Fairfax county public schools on Wednesday, May 10.

“We’re all here because we know that this is a very urgent conversation,” Jeffrey Saxe, a rabbi with the temple, said during the event. “We know that over the last year, there are many students who have felt challenged, who have felt unwelcome or mistreated in some way around their school community.”

Carrillo-Klein got help from her assistant principal. She also confronted her classmates to express how their anti-Semitic actions made her feel.

RESOLUTIONS that right wrongdoing and put victims at ease are not always the ending for every instance of harassment.

“I have to say that I am not shocked, but very saddened that perhaps the No. 1 issue that we have dealt with at the Jewish Community Relations Council in the last six months has been helping parents to deal and grapple with anti-Semitism and other expressions of bigotry and bullying in their children’s schools,” Guila Franklin Siegel, associate director of the JCRC of Great Washington, said during the event.

Siegel told the crowd that she and her organization have not just been hearing increased complaints from parents about anti-Semitic incidents, but also bullying and harassment of immigrants, lesbian, gay, bisexual and transgender (LGBT) and other minority students.

“Children cannot learn if they do not feel safe,” she said.

Carmen Beadie, a gender-nonconforming junior at McLean High School, also spoke out against hate they endured in school. This prejudice was allegedly perpetrated by a health teacher.

Beadie prefers to use gender neutral pronouns like they, them and their. Beadie has received push back on gender identity and self-expression.

“I remember it very clearly,” Beadie told the audience about an incident which took place over a year ago. “It was in front of my whole class. He was talking to the whole class, but I remember he looked at me directly in the eyes and said, ‘No matter how you cut your hair or how you dress, you’ll always be a girl and nothing can change that,’” Beadie told the audience.

The class just stared at Beadie, who didn’t know how to respond.

“I just said, ‘Thanks for your input,’ and just stayed quiet for the rest of class,” Beadie said.

Beadie told the crowd how tiring it is to defend yourself and that many previous complaints of inappropriate behavior by the teacher had gone without action from the high school’s administration.

“I realized it was not really about me anymore,” Beadie said. “It was about other kids that could be affected. I didn’t have it that bad. I’m actually quite lucky for the support that I found at McLean.”

Beadie eventually told the band director. Now the individual is barred from teaching health, according to Beadie.

“I’m afraid,” Beadie said. “Honestly, preparing for today was a little bit scary because I don’t want it to get back to me. I don’t want to get in trouble for this because he’s a pretty intimidating guy.”

Like Beadie and Carrillo-Klein, four other students stood before the audience and talk about their mistreatment, ranging from a coach preventing a student and her teammate from playing mid-season on the J.E.B. Stuart High School softball team because they were wearing hijabs to other stories of Islamophobia and anti-Semitic incidents that produced gasps from the crowd.

Before the students shared their experiences, a panel talked about strategies for combating prejudice.

THE PANEL was moderated by Michael Shochet, senior cantor with the Temple Rodef Shalom, head chaplain for the Fairfax County Police Department and member of the Fairfax County Communities of Trust Committee, which was created in 2015 to improve relations between public safety agencies and the communities they serve. The panelists were:

The project is a formal and facilitated process that brings victims together with perpetrators of wrongdoing to discuss incidents with a purpose of creating an agreement for reparation of harm. “It is a voluntary process and it is critical that it remain voluntary,” Panarelli said. “I cannot force a child to participate in a restorative justice process. If the child is saying, ‘I didn’t do this,’ it makes no sense to put them into a restorative justice process.”

An advantage of this process, according to Panarelli, is that the parents of all students involved are invited to witness the conferences that occur during the program, when other forms of discipline usually requires confidentiality that bars schools from disclosing specific information about other students to victims and their parents.

“They sort of see the process unfold … and they are part of that process,” she said.

The process has been extended to criminals.

Police officers with the Fairfax County Police and Herndon Police Departments, including school resource officers, are now allowed to use the restorative justice process to resolve crimes when they are committed by students on and off school grounds, according to Panarelli.

“Let’s say somebody stole a [smart]phone,” she said. “Well, that’s a felony because of the cost of the phone. So, a 13-year-old, they may not want to charge with a felony because they took someone’s phone. This is giving police officers a chance to refer crimes to restorative justice rather than making formal complaints with the courts.”

However, student victims of harassment have rights under the law, which Gordon outlined for the audience.

“Bullying is a significant issue in school and the federal government has done studies,” Gordon said. “Surveys indicate that nationwide, 22 percent of students grade six through 12 have experienced bullying.”

Gordon explained to the audience the legal differences between harassment and bullying.

Harassment under the law only pertains when people are being discriminated against for their race or color, national origin, sex and religion, according to Title 6 of the U.S. Civil Rights Act of 1964, which prohibits this kind of discrimination in programs and activities receiving federal financial assistance.

“Bullying that does not relate to a protected class is not harassment under the federal law, however, it is still wrong and it is still something that you can report to the school administrators and psychologists,” he said.

This leaves Beadie without legal recourse under federal law, as gender identity and sexual orientation are not federally-protected characteristics.

Panarelli told the audience that when FCPS investigations do not rise to the definition of harassment under the law, “we would still go forward to ensure that a student who was the target has things in place to feel safe.”

Actions that make students feel unsafe and harassed do not have to be physical attacks.

“Harassment is unwelcome conduct based on a protected class that can include verbal abuse such as name-calling, epithets, slurs, graphic or written statements, threats, physical assaults and other conduct that may be physically threatening, harmful or humiliating,” he said.

Gordon spoke about how the U.S. Department of Justice handles reports of harassment at schools.

“What we care about is how is the school division responding to this conduct,” he said.

He explained that once school divisions are notified of harassment — whether through complaints or through reasonable oversight and supervision where school officials should have known about the conduct — they are required to act. It is a potential violation of civil rights statutes if school divisions do not take appropriate steps, especially if attending school becomes a hostile environment for the victims, according to Gordon.

According to Gordon, schools should communicate corrective actions to the victims and have an evaluation process in place that includes speaking to victims to determine whether the actions were successful.

Gordon encouraged parents of children in Arlington and Fairfax county schools to contact him directly if they think harassment is occurring at their schools that is not being addressed correctly by school officials by emailing him directly at steve.gordon@usdoj.gov or calling him at 703-299-3817.