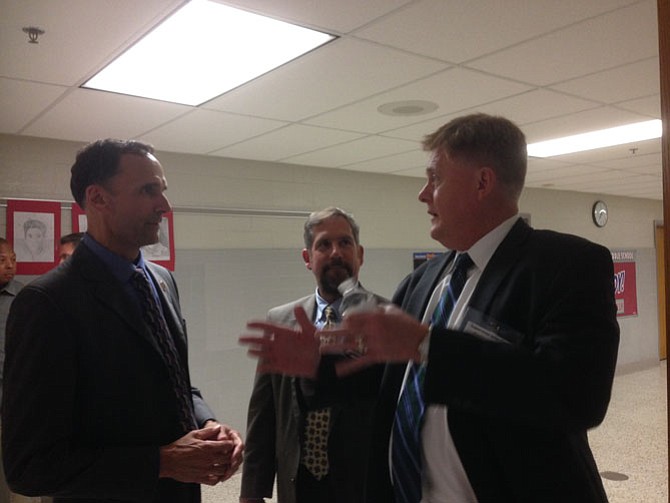 Mount Vernon — In an effort to increase transparency, break down barriers and bring the

Sheriff Stacey Kincaid explains the relationship between the police and sheriff’s office.

“My goal was a combination of educating the community and helping residents better understand the public safety changes that have been occurring over the past few years and to address recent concerns that we have about immigration enforcement,” Storck said.

In addition to the question cards that were distributed, the audience had an opportunity to voice their concerns.

“Public safety is the first job of local government,” said Cook, who is also the Public Safety Committee chair, and gave an update on the Ad Hoc Police Commission. The book that outlines the Ad Hoc is broken down into 202 distinct recommendations for public safety which includes the use of force and the sanctity of life. “Try to use methods other than the use of force,” he said. “The Board of Supervisors does not write the general order on use of force, the specifics are done by the chief of police,” Cook said.

Storck invited Kincaid to the meeting to explain the partnership between the sheriff's office and the police department.

“The days of locking them up and throwing away the key has changed,” she said. “Diversion First” is a program both the police department and sheriff’s office uses that seeks alternatives to locking people up. “Diverting folks that are in need of treatment,” she said. “Jails and prisons have become the default psychiatric hospitals,” she said.

Morgan compared what an officer might run into out on a call to a shook up soda can. “We don’t really know what we’re getting into, we need officers that know how to deal with that,” he said, pointing out that 217 officers in Fairfax County are CIT trained.

Some members of the audience were more concerned about the immigration enforcement that has occurred in recent months. “They feel they are being targeted, they have been stopped because of the way they look or can’t speak English,” said one woman. Lt. Jerry Watts, the assistant commander of the Mount Vernon Police Station said that was not the case at his station. “None of my officers are stopping people for the way they look,” he said.

Captain Anthony Mattos, who will soon be the new commander at the Mount Vernon Station, reiterated that sentiment. “Our officers don’t stop anybody based on the color of their skin, if that’s happening, I want to know about it,” he said.

The racial make-up of the audience was mostly white, and not many Spanish-speaking individuals were there. “They’re not here because they’re afraid,” said another woman.

At meeting’s end, some of the procedures used by law enforcement were examined. There were some questions that needed a more thorough answer, particularly from Kincaid who left before all the questions had been discussed, said Tim Wagner, of the Mount Vernon/Lee PeoplePower group. Question cards were turned in by the group, and Wagner said that Storck will ask Kincaid to respond to any that have not been answered.

The next event in this safety dialogue series is on June 30, from 9 a.m. to noon at the Mount Vernon Supervisor’s office and will focus on the senior community and the numerous public safety programs the county provides for seniors.

In the fall, Storck will be hosting a meeting with Cook to discuss the Ad Hoc Police Commission and how these changes continue to enhance public safety in the Mount Vernon District and Fairfax County.