‘Music to Do Good and Help People’
Votes

‘Music to Do Good and Help People’

Project Joy will provide an income for Zambian orphans. 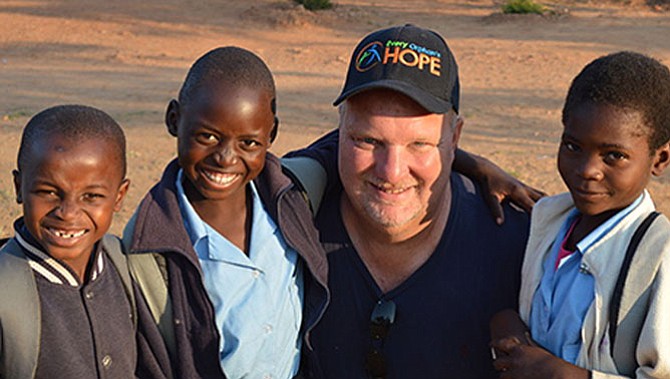 The orphans gather around Don Halterman and his guitar to learn new music.

When Don Halterman was the praise and worship director at Centreville Presbyterian Church, he went on a mission trip to Zambia in 2012. And although he returned home to his life here, the orphans he’d met there stayed on his mind.

A musician, he was determined to better their lives in some way. And now, through a new venture called Project Joy — via which these children will perform and sell their original songs — he intends to do just that. But it’ll take some help from others to bring it to fruition, and he’s hoping members of the community will open their hearts and wallets to lend a hand.

“When I went to Zambia, I fell in love with the orphans there and became passionate about helping them,” said Halterman. “And since retiring from my position at Centreville Presbyterian, two-and-a-half years ago, I’ve wanted to start my own music company. But I wanted to do meaningful music that impacts the world — which is my company’s mission statement.”

So he and the three others in the company, Grander Music — Centreville residents Kent Washburn and John Nixon, plus photographer Anders Arestad of Front Royal — looked for artists and organizations to promote, in line with their goal. Their vision statement is “Rite place, right people, write music.”

Halterman said the word “rite” is used as signifying a sacred spot. “We believe that God put us [the right people] together to do this — write music that can do good and help people,” he said. “What makes the music meaningful is its impact in the world after we create it.”

He returned to Zambia in 2014 and started singing with the orphans there and helping them write songs. “I loved the way they sang so joyfully and passionately,” he said. “Their voices were untrained, but really beautiful.”

The following year, Halterman went back again. Accompanying him was Centreville’s Cathy Baker, a board member of Every Orphan’s Hope (EOH) — a national group that sponsors Zambian orphans and builds villages in Zambia. “I worked with the kids, singing songs and helping a couple of them write original songs, and Cathy recorded them,” said Halterman.

One in five Zambian children became orphans after that country’s AIDS epidemic; and in 25 percent of households there — some 625,000 — the primary caregiver is a child. And there’s such widespread poverty in Zambia that it’s extremely difficult for orphans to find a sustainable source of income.

“The Zambian community doesn’t support employment opportunities for the younger generation, so they have to find their own things to do,” said Halterman. “So EOH works on sustainability projects for them, and I’m adding in my project to theirs.” (To see a video about it, go to https://www.gofundme.com/project-joy).

Via Project Joy, he plans to produce a full-fledged documentary on the entire process of teaching the children new, original songs, plus dances to their music. Then the goal is to have them perform their songs and dances at various community churches and functions throughout Zambia — but mainly in Lusaka, the capital and most-modernized part of the country.

“These kids have no money or material goods, yet they’re happier and more joyful than anyone in the U.S.,” said Halterman. “It just takes me aback. I believe it’s because of the joy of the Lord — only He can give it to you. We all have joy as humans; but when you connect it with God, it bursts out so other people can see it.”

Ironically, he said, when he was a boy in Sunday School, he remembers saying, “I’ll do anything for God; just don’t send me to Africa to be a missionary.” Said Halterman: “It was just the unknown, so it was scary to me then. So this project is God’s sense of humor.”

Basically, he said, “It’s tough over there. These kids have so little; their parents have either died of AIDS or left them. But I want them to have a sustainable, meaningful life so they can be part of the solution, not the problem.”

EOH supports more than 100 orphans there, and 25 have been identified as having the skills to perform the songs and dances. “We’ll produce seven, original songs — two of them written by one of the orphans and five written by me,” said Halterman. “They’ll have reggae and island rhythms.”

They’ll be recorded as both a CD and a DVD, and people who donate at the Website, www.musicprojectjoy.com, will be able to download them. “It’s all tax-deductible because we teamed up with a nonprofit called PCI — Public Communications Inc. — which will collect the donations and send 100 percent of the money to Project Joy,” said Halterman. “There are no salaries; but we need to raise $58,000 to help us travel to Zambia, produce the CDs and DVDs and prepare the kids to go out and perform.”

Then the orphans can both sell the CDs and perform for money, which will provide an income for them. On the DVDs, available to contributors, each song will be accompanied by a video.

“We plan to return to Zambia in August, for about two weeks, to do the project,” said Halterman. “The kids are excited about it; they love singing and interacting with others. And I did the music tracks to go with their songs.”

He’s hoping people will contribute to the cause at the website because, unlike many other projects, this one will have an immediate, positive impact on the children’s lives. “They could do a concert the week after we leave,” he said. “And this is a way people can help kids in Africa, even if they can’t go there. They can still be an integral part of these orphans’ lives and really make a huge difference.”