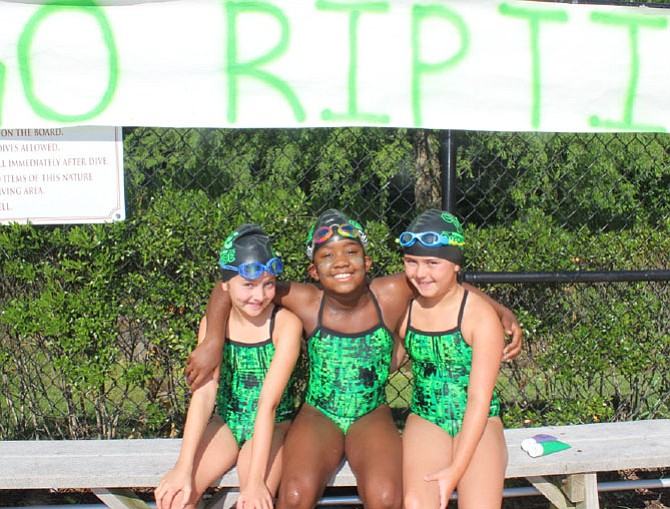 A major record was set and swimmers excelled as the Virginia Run Riptide opened its 2017 NVSL season. The Riptide’s Charis Roundtree swam a blistering 15.25 seconds in the 25-meter freestyle to shatter a 32-year-old NVSL record for 8 and under girls. And while 55 Riptide teammates swam to 78 personal bests for the season, Virginia Run was narrowly beaten by Vienna Woods 221 to 199.

When Charis Roundtree set the NVSL freestyle record, her teammates Anna Kelliher and Carson Coughlin captured second and third for a sweep of the event. In backstroke Carson Coughlin placed first and Caroline Friess third. With new best times in breaststroke Charis Roundtree took first and Jenna VanBuren second. Caroline Friess was first and Anna Kelliher was second in butterfly, also recording personal bests. For the 8 and under boys Ethan O’Connor was third in free and first in back. Five-year-old Tyler Harris swimming in his first A meet, captured a third place in backstroke. Older brother Nicholas Harris won both the breaststroke and butterfly with two best times and Christopher Thomson, also swimming a best time, swam to second in the breaststroke.

Outstanding swims were made by the 11-12’s with Caitlin Kelliher placing second in free and fly and Isabelle Cogan third in back and fly. Jackson Blansett, swimming two personal bests, placed first in back and fly, while Charles Beamon took a first in free. William Whitton was third in free and second in back. Griffin Osterhout placed second and Nathan Ryman third in breaststroke, while Sean Gunn captured third in fly.

For the 15-18-year olds, Sarah Boyle captured first place in free and fly, setting a new team record of 30.00 seconds in the 50 meter butterfly. Meredith Matz swam for second in breaststroke and Chanel Cogan for third in backstroke. Nick McGrath won first in free and breast, Anthony Arcomona was first in back and fly, while Thomas Beamon was third in free and back.

The lead in the meet changed on six occasions, but heading into the relays the Riptide needed to win a majority of the races. Virginia Run came up a little short, winning 5 of 12 relays.