House Paint and Risk Takers at McLean Project for the Arts

The McLean Project for the Arts show Strictly Painting opens at new venue. 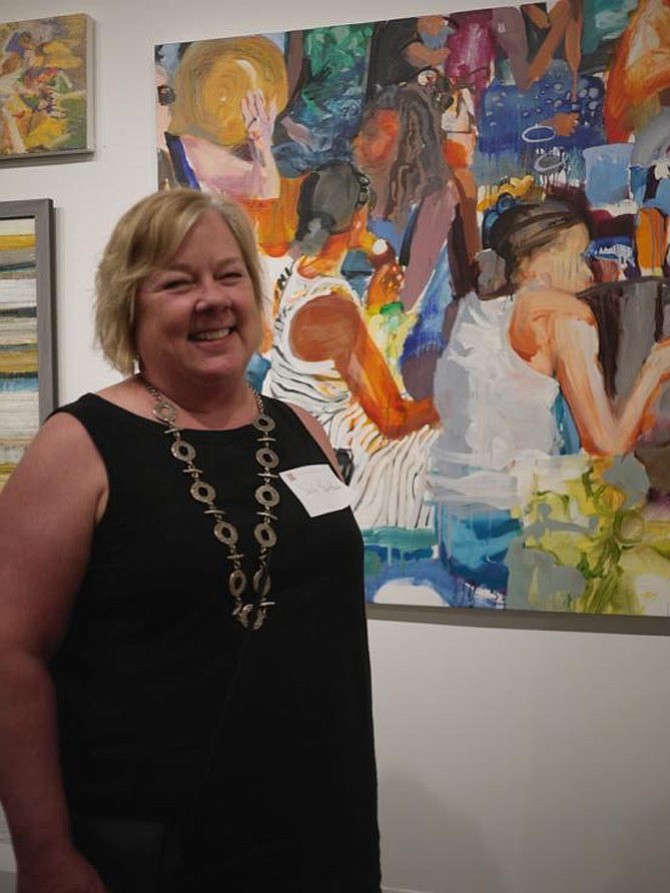 ”On and On,” a painting by Sally Kauffman: Kauffman had two similar paintings chosen for the DC Commission on the Arts and Humanities’ Art Bank Collection. Photo by Eden Brown. 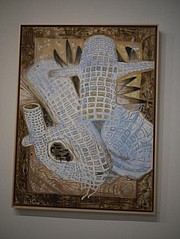 “Injury and Pardon,” by Sue Grace. Grace says, “In this painting I was looking at the notion of forgiveness – how that emotion gets framed. For me, painting is a fascinating battleground where abstraction combats the figurative.” 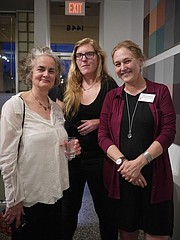 Sue Grace, an Arlington painter, with Jen Lillis and Nancy Sauser, Executive Director of the McLean Project for the Arts.

If 1446 Chain Bridge Road were not in a strip mall next to the Giant supermarket in McLean, but down some sandy road to the beach in East Hampton, N. Y. or Easton, Md., …then you could imagine it this way: “the McLean Project for the Arts inhabits a new summer home it has decorated with stunning modern canvasses by risk-taking painters. The other night, guests milled about the home, sipping wine and admiring the art, which simmered with the sophistication of nearby New York or Richmond…"

The show is called Strictly Painting 11 and features Arlington and Washington, D.C artists as well as Charlottesville area painters. Some of the paintings in the show are rich with color; some rely more on design and limit the color to grey, black, and white. All of the exhibited work makes one want to “meet the people who live in this summer home" – the painters – and those who created this oasis of modern art squeezed in between a Turkish restaurant and the CVS.

At the opening reception for the show on June 15, people came in to sip wine and do just that. This juried biennial exhibition of the work of artists from the Mid-Atlantic region explores the medium of painting. The Juror who elected the entries is Anne Reeve, Assistant Curator at Glenstone, a private museum near Washington, D.C., devoted to modern and contemporary art.

One artist, Sally Kauffmann, stood in front of her oil on canvas painting called “On and On,” a vibrant scene at the outdoor concert series in Washington, D.C., last summer. She did a series of three paintings showing people outdoors at the concert, talking and taking in the music – it’s a loud, boisterous canvas that reminds one of the Bal du Moulin de la Galette or the Dejeuner des Canotiers by Renoir, so full of life and color that you can hear the conversation and laughter.

It’s not an impressionist at all but a lovely blend of abstract and representational art. Two of the series were purchased by the city of Washington for its art in public spaces program.

AT THE SHOW, visitors can treat themselves to modern art reminiscent of the fundamental life objects of Claes Oldenburg, the reclaimed house paint can lids, “The Colors of Our Lives,” by Steven Dobbin, actually very soothing to look at – and the eggs on toast with ketchup bottle, “Match Enemy” by Jenny Walton. “Torrent” by Paul Hrusa is a beautifully executed natural rush.

Sue Grace had a painting elected for the juried show, with an intriguing title, “Injury and Pardon.” Like many of Grace’s paintings, it has a wonderfully muted palette of colors, and looking at it makes one feel allowed in on an intimate moment of emotion. Grace's art is about the domain of abstract versus figurative. She accentuates the flatness of the picture plain by emphasizing marks or patterns and at the same time renders a recognizable shape that can tell a story.

Grace said, "In this painting I was looking at the notion of forgiveness: how that word gets framed. For me, painting is a fascinating battleground where abstraction combats the figurative." Grace is an Arlington painter who has been painting full time for 10 years: re-emerging after an earlier art career and raising a family.

Nancy Sauser, the McLean Project for the Arts executive director said most of the work she shows is from the mid-Atlantic region. The summer exhibit was physically set up by Jen Lillis who is the gallery manager and did the lighting for the show in its new, temporary space, while renovations on the McLean Project for the Arts take place. The show will be open to the public from June 15-Aug. 12, 2017.