From DEAL to Metal Coffins
Votes

From DEAL to Metal Coffins 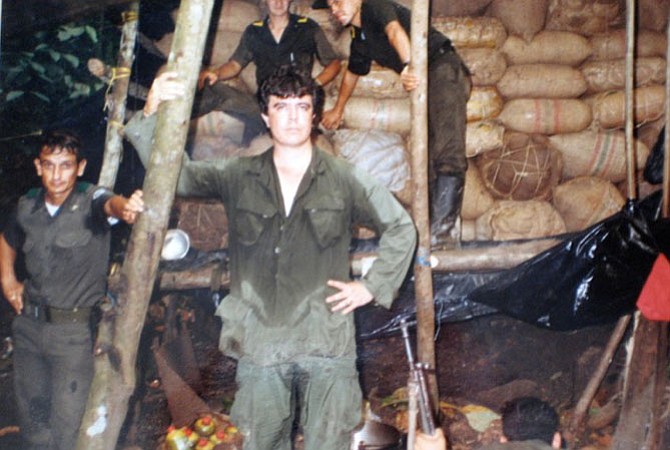 Seizure of 30 tons of marijuana with the Colombian National Police in the Sierra Nevada mountains.

For the former undercover DEA agent Mike Vigil, retirement from the Drug

Enforcement Administration (DEA) the last 13 years has been busy. Giving lectures, consulting internationally, participating in documentaries and media discussions on the U.S. war on drugs are just a part of what he’s been up to. He’s also become a novelist.

Two years ago, he published his memoir “DEAL” after colleagues and friends persuaded him to write a book based on his experiences.

“At first, [writing a book] seemed very daunting,” said Vigil who spent a year writing his memoir. “The hardest thing is getting started but once I did that, all of a sudden, I had 10 pages, then 50 pages, then 200.”

Vigil’s perseverance and ambitions shouldn’t come as a surprise. “I was never one to give up. I. Never. Gave. Up,” said Vigil, 66.

The story, based on actual events, follows the life of the DEA’s top agent assigned to Mexico, Miguel Villa who launches an operation to take down the Blood Alliance Cartel before they become too powerful. If the comparisons between Vigil and his main character seem to be accidental, they’re not.

“I share characteristics with Miguel Villa. Compassion for others, being decisive, going full force trying to dismantle drug trafficking organizations rather than sitting in the office all day,” he said.

“He has traveled the world and worked in some of the most dangerous situations there are,” said Mike McManus, former DEA chief of operations for Mexico and Central America, who worked with Vigil.

For all of Vigil’s experiences, he was awarded Top Cop in 2000, an award that pays tribute to outstanding law enforcement officers across the country for actions above and beyond the call of duty. Vigil became chief of international operations responsible for numerous multinational operations, the largest involving 36 countries and developing global intelligence sharing platforms. Like Miguel Villa, Vigil spent most of his 31-year career as an undercover agent, living among drug traffickers.

Growing up in Espanola, a predominantly Hispanic and poor city in New Mexico, Vigil grew up with a lot of “pachucos,” juvenile gang members of Mexican-American ethnic origins. Vigil says being surrounded by thug slang and mannerisms benefitted him later in his DEA career.

“I looked at the DEA as an adventure. It was not a monotonous job. A chess game of life,” he said. “I very much enjoyed it.”

“I used to watch movies as a kid. I was fascinated by movies like the ‘Untouchables ‘and ‘Dragnet’,” he said.

His undercover work meant penetrating drug rings and he eventually developed a sixth sense about threats. He recalls the time he had got a fictitious driver’s license for his cover right before meeting a distributor. As he was sitting in his parked undercover car with one of Colorado’s top 10 heroin distributor’s “Lieutenant,” a Denver police car asked to see their licenses.

“When the cop handed the licenses back, the Lieutenant stopped to look at mine,” said Vigil. “I could almost predict this was going to happen.”

Another time things got dangerous was the night Vigil almost got shot.

Vigil recounts the night he and a drug trafficker sat at a gas station restaurant in northern Mexico, waiting for Vigil’s informant and the trafficker’s henchman to return. “If you’re a federal agent, we’re going to kill you,” the trafficker said to Vigil. Meanwhile, Mexican law enforcement officers were waiting outside for the right time to make the bust. When that moment came, a Mexican officer put a gun to the trafficker’s chest. But the trafficker had more leverage, grabbing the barrel of the gun. The gun went off and hit the officer in the head. He then aimed it at Vigil.

“I could feel the bullets go by,” said Vigil who added that he remembers the incident like it was yesterday. Vigil finally shot the trafficker in his chest who later died from his wounds. It was the first time that Vigil killed someone, something he prefers not to look back on.

“I can honestly tell you I was never afraid,” he said. “When the situation got really dangerous, I became very deadly calm. I didn’t get nervous, which is a good thing because when you get nervous, your mind starts to race and you’re thinking about so many things you can’t think clearly and make rational decisions.”

Vigil says that he learned to deal with stress from his father, who was a survivor of the Bataan Death march and a POW camp in Japan.

“I learned to have courage under the most difficult times and adverse conditions,” he said.

At the beginning of “Metal Coffins” men’s bodies are discovered in oil drums filled with cement abandoned along a main highway. Vigil got the idea from one of South America’s leading drug lords, Amado Carrillo Fuentes who died after recovering from plastic surgery. Days later, Fuentes’ doctors were found stuffed into 55 gallon barrels filled with cement and strewn along the main highway between Mexico City and Acapulco.

When Vigil became chief of international operations for the DEA, he developed information sharing systems and at some point, brought as many as 36 countries together to share information.

“There was always a method to my madness,” he said. “I didn’t believe in the status quo ... Once I saw that objective, it was taking that hill at all costs.”

“He had the best relations with the Mexicans and Colombians during the height of the drug war,” said Sosnowsky, a 25-year DEA veteran who adds that Vigil was the most effective boss he’s ever had.

When asked about the current administration’s plans to build a border wall, Vigil says the Trump administration could benefit more by working on a collaborative strategy with the northern triangle countries of El Salvador, Guatemala, and Honduras and encourages the administration to think the idea of the wall through.

As for his stance on legalizing marijuana, he said, “We cannot have a policy of, do as I say, not as I do.”

“We can’t push these countries into drug campaigns at the great loss of manpower and funding that they don’t really have, and here we are, legalizing the drug. Legalizing drugs has international implications,” he said.

Vigil is part of a U.K. documentary called “Wildlands” about the realities of the international cocaine trade in Bolivia. The documentary will launch on Amazon Video, Google Play, and iTunes on March 6.

Vigil also has already started his second book in the series starring Villa and a Narco Queen.

Vigil lives with his wife in Alexandria.