‘Into the Woods’ at The Madeira School
Votes

‘Into the Woods’ at The Madeira School 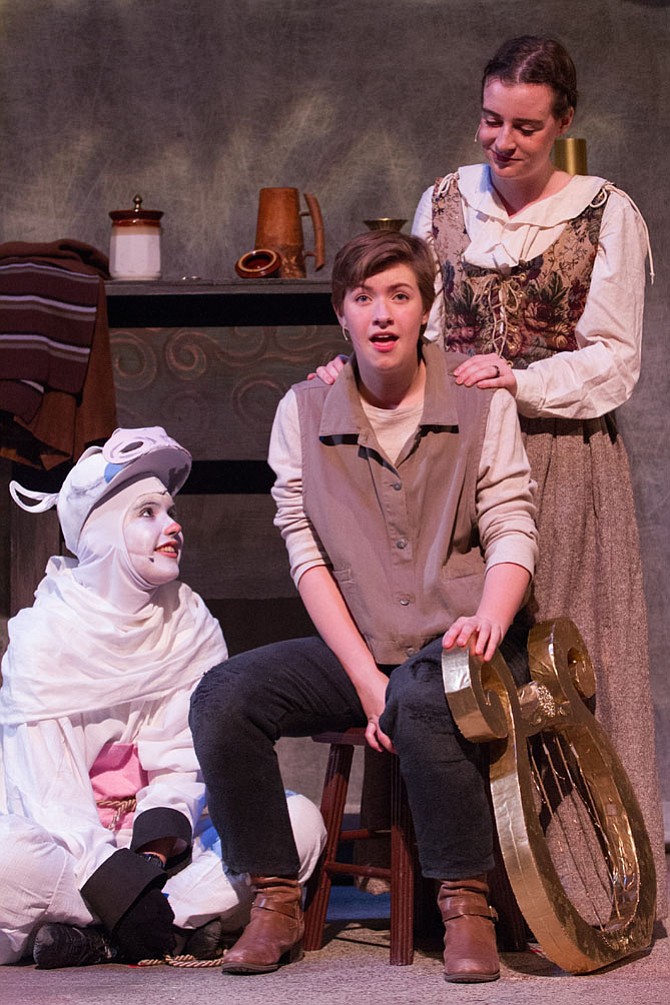 You never know what to expect when journeying into the woods. Perhaps you will cross paths with a wily wolf, or an innocent boy with his cow. However, you would never expect to find the sublime vocals and enticing performances of The Madeira School's cast of “Into the Woods.”

A classic musical by Stephen Sondheim, “Into the Woods” epitomizes the fractured fairy tale. Treasured characters from children's stories are brought together in one giant spectacle. As the show progresses, their happy endings are forever altered by a maniacal witch and a few old beans.

In a show known for its subplots and distinctive characters, the Madeira cast made sure every story was heard. Cinderella (Keenan Parker) won hearts with her spectacular range and melancholy expressions. She was juxtaposed with her stepfamily, all deliciously evil and remarkably fun to despise. Jack (Zoe Crawley) and Little Red Riding Hood (Katie King) captured youth and playfulness in their characters. They also showed growth as Little Red learned “many valuable things” and Jack found his confidence at the top of the beanstalk. Jack's faithful companion, Milky White (Alex Raposo), was effortlessly funny without “uddering” a sound.

The Baker's Wife (Claire Pitzer) was a breath of reality. As Cinderella spoke of her glamorous nights at the ball, Pitzer was stunned by the idea of even encountering royalty. Later, when she had her very own royal fling, Pitzer grounded herself with stern reasoning, reassuring herself that it was only a “moment in the woods.” Vei Vei Thomas, playing Cinderella's Prince, brought her fantasies to life. Thomas and Prabha Girish (Rapunzel's Prince) embraced their roles with outlandish masculinity and flirting.

“BOOM! CRASH! A lightning flash!” Every moment of Magana Ngaiza as the witch was electrifying. Ngaiza's disfigured form and chilling, wild-eyed takes to the audience accentuated her stunning vocal performance. This diabolical persona contrasted perfectly with the elegant post-transformation witch. Although Ngaiza maintained her insidious personality and questionable motives in the second act, she developed an entirely new physique as she relished her newfound beauty.

Every member of this cast was female, yet the personas of male characters and the chemistry between couples were consistently believable. Ensemble numbers were full of haunting harmonies, maintaining the integrity of Sondheim's intricate score.

One of the most impressive technical elements was the set. Naturally, a show built from storybooks should have a set built from them too. The trees in the woods rose upon trunks formed from book spines and extended into branches made of pages suspended from the ceiling. The curved trunks made the forest perfect for hiding, providing a vehicle for a certain mysterious man to disappear. The use of a cyclorama was also commendable. At the beginning of each act, before the characters journeyed into the woods, this piece was used with three fireplaces to represent the homes of characters. Each fireplace was beautifully designed to show the characters' personality and status. The narrator sat in a library nook off to the side, separating himself from the story at hand.

The breathtaking sets and stellar performances in The Madeira School's production of “Into The Woods” were a fairy tale come true.