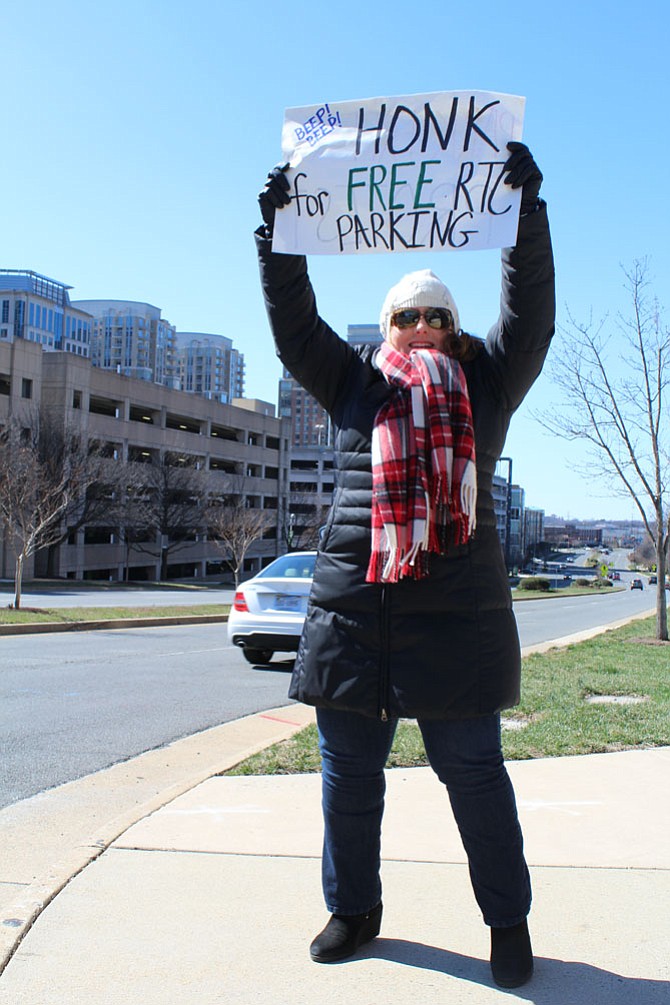 Suzanne Zurn of Reston stands at the corner of New Dominion Parkway and Fountain Drive as protest marchers organize at step off point. Zurn started a Change.org petition against paid parking well before it was implemented in March 2016. Photo by Fallon Forbush. 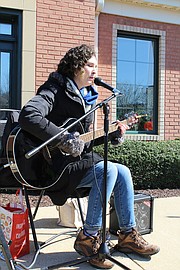 Tessa Luther of Reston volunteered to keep protesters entertained prior to marching. 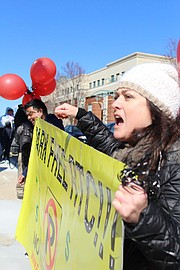 Protest organizer Elizabeth Krial held the banner at the front of the march and helped lead marchers in changing: “Park free RTC” and “No way, we won’t pay.” 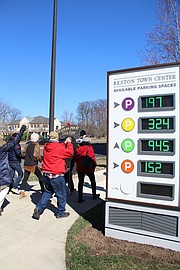 Protesters march past a Reston Town Center parking garage sign that displayed more than 1,600 vacant parking spaces in the garages—which are free on Saturdays and Sundays. 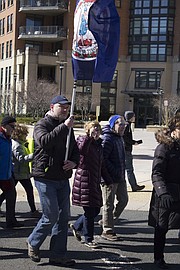 Scott Laemmle of Reston ­carries a Virginia state flag during the protest march. 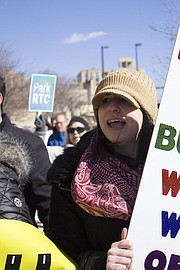 Jean Maskuli of Herndon chants during the march while displaying her homemade sign: “Marching for the busboys, waiters and workers of RTC.” 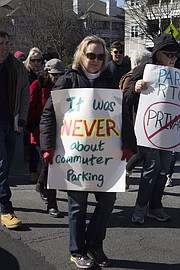 Gamble Gilbertson of Reston marches while holding a sign countering one of Boston Properties’ primary reasons for implementing paid parking: to keep metrorail commuters from taking away parking spots from town center patrons and employees. 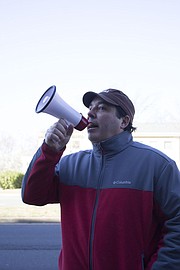 Aaron Gordon of Gordon Food Group and the proprietor of the Red Velvet Cupcakery in the town center uses a megaphone to invite protesters to his cupcakery for a “cookies crawl” to end the protest. While marchers indulged in free cookies, they were encouraged to visit nearby restaurants in the town center to partake in special happy hours.

Cold winds didn’t deter the crowd — estimated at up to 500 people — from marching around the town center’s grounds for nearly two hours.

While Reston Town Center was naturally unwelcoming to the marchers, many drivers passing by the crowds honked their horns in showings of support. Even drivers at streetlights cheered marchers on as their long lines momentarily blocked traffic at intersections.

The assembly of protesters have specific demands for Boston Properties, which owns and manages the buildings in the town center.

They have asked Boston Properties to reduce the hourly parking rates or give patrons the first hour or two free, according to Kim Reinbold, who helped organize the protest march. She said she and other organizers would also like to see parking free after 5 p.m. on weekdays.

MANY OF THE PROTESTERS, especially older participants wielding flip phones, also despise the ParkRTC smartphone app that is used to pay for parking sessions.

“We want to bring awareness to Boston Properties that the plans they implemented are too expensive and not user-friendly,” said Maria Lam, who helped organize the protest march. “People are boycotting and we don’t want to see it turn into a ghost town.”

Paid parking will remain at the Reston Town Center, despite protesters’ vocal opposition.

Kathy Walsh, spokesperson for Boston Properties, issued this statement to the Connection on the day of the protest march:

“Boston Properties remains committed to this paid parking model which they believe meets the objectives outlined for paid parking:

Yet, Boston Properties may be open to the idea of adjustments.

“While paid parking has only been active for a relatively short period of time, Boston Properties will continue to evaluate operating and business impacts, and pledges to assess input and make modifications to the systems and its processes, as necessary,” Walsh said.

MERCHANTS, who say the parking fees have driven away business, are not holding their breath. Opposing merchants have organized under the Reston Merchants Association and have hired the Fay Law Group to look into their lease contracts with the town center.

“We’re not going to stop as merchants fighting this thing,” said Aaron Gordon of Gordon Food Group and the proprietor of the Red Velvet Cupcakery in the town center. “I have two years to fight this and I’m not going away.”

While Gordon’s Red Velvet Cupcakery has two years left on its lease at the town center, he said Boston Properties does not care about how its paid parking fees impact the town center’s small businesses.

“Either they’re so brutally naïve that this many people would boycott, or they’ve got so much money that they don’t care and will let companies die because they can find replacements,” he said.

On Saturday, Gordon led protesters to his cupcakery for a “cookie crawl,” despite security guards’ insistence that they were not allowed to enter the town center while holding their protest signs.

Without any scuffles, marchers ignored warnings and continued to follow Gordon down Library Street and onto Democracy Drive where they ate free cookies and were encouraged to support local businesses at the town center by staying for drinks and special happy hours.