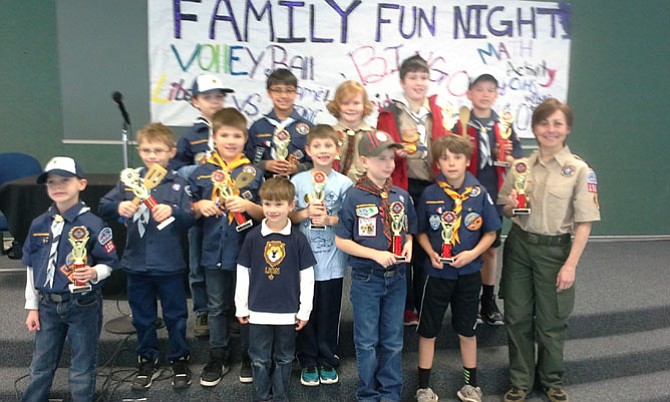 Winners of the Parent/Son Bakeoff. Photo by Hondo Davids

Cub Scouts from the Centreville/Chantilly/Clifton area gathered for the annual Sully District Pinewood Derby and Parent/Son Bake-off competitions on March 4 at Liberty Middle School in Clifton.

Leaders from Pack 127 and Pack 1859 provided racetracks and volunteers for the Pinewood Derby races. Trophies for the top three finishers were awarded for each rank level and for the overall district championship race. Also, for each rank in the Pinewood Derby a “Coolest Car” certificate was awarded by Explorer Post 6500, an Automotive Post sponsored by 29 Diner. The Post also provided refreshments by running the concession stand.

For the Bake-off Competition, trophies were awarded for the top three winners in each of the five bake-off categories: Breads, cakes, pies, cookies, and decorative/creative. Hondo Davids, Sully District chairman, thanked David Weisz who oversaw the event and Jenni Davids for leading the Bake Off event and to all the parent volunteers.