Some successes, some defeats, and a partisan rallying call for 2017 elections. 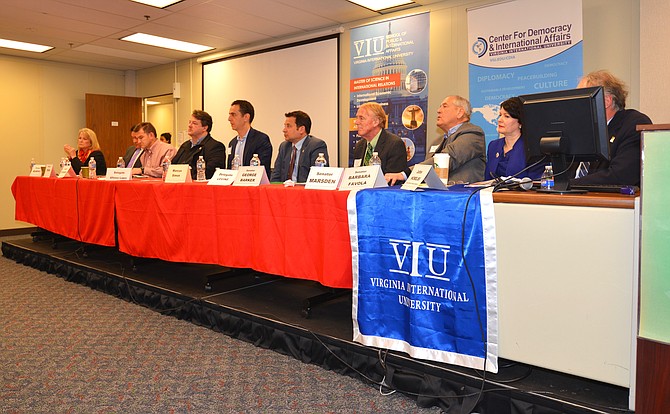 Members of the Virginia General Assembly offered their views on the recently adjourned session and listened to questions and comments from the audience during the SALT 2017 Legislative Wrap-Up forum. Photo by Andrea Worker.

“Who will protect people like me?” Jisan Zaman of Arlington was momentarily overcome by emotion as he questioned the lawmakers. “I am Muslim. I am American,” he said, but expressed concern with the rise in hate crimes and the threat of a Muslim registry. Members of the audience rose to support him, and the lawmakers applauded him before tackling the questions.

The 2017 Legislative Session of the Virginia General Assembly was adjourned on Saturday, Feb. 15. The Social Action Linking Together (SALT) network allowed the lawmakers two weeks to recover, then hosted its annual Legislative Wrap-Up forum on March 11 at the Virginia International University in Fairfax.

Eleven elected officials were on hand to offer their reports, focusing on the fates of bills and resolutions related to social justice, human services and welfare. Several of the proposed legislations had been requested, inspired, or actively supported by SALT. The faith-based non-profit seeks to advocate for the most vulnerable in the community by educating citizens and policy makers, researching and selecting priority issues for action, and taking their causes directly to the state capitol.

Pointing to the panel of speakers, founder John Horejsi, admitted that SALT members, who have grown from eight to around 1,200, have often been seen “prowling the halls in Richmond.”

State Sen. Dave Marsden (D-37) indicated his approval of SALT’s visits. “People like you, and the people in this room, they are the bedrock of our county,” he told them.

State Sen. Barbara Favola (D-31) added “how important it is to see your faces in Richmond,” noting it was too rare to see individuals and concerned citizen groups rather than professional lobbyists. “You study and you recommend, and we are appreciative.”

Favola has been a driving force for assistance to single mothers and children, particularly through the Temporary Assistance for Needy Families (TANF) program. The senator told the assembly that lawmakers had tried to secure increases for TANF recipients for 15 years without success. Now, she said, “we have had three increases in three years.”

“The money doesn’t come from our state budget,” said Favola. TANF is funded federally through block grants. With nods of agreement from her colleagues on the panel, Favola said it would be shameful not to utilize the money available “for what it was intended. Helping families in need and moving them toward self-sufficiency.”

$55 million were still available through the TANF grants, yet Del. Kathleen Murphy’s (D-34) HB 2041 to allocate $1 million for a TANF Scholarship Pilot Program to allow 200 students to attend community colleges was “recommended to be laid on the table by voice vote” in subcommittee.

THE FACT that the panel was composed only of Democrats did not go unnoticed. “Where are the Republicans?” asked David Jesse of Reston, who said this was his first time to attend such a forum. “I was hoping to hear some balanced debate.” Horejsi replied that in the past, Republicans like Del. James LeMunyon (R-67) had attended. “We sent out 40 invitations.” The Republican representatives either declined or did not respond to SALT’s request.

With no one from “across the aisle” present to contradict their opinions, several of the lawmakers insisted that many of the issues that were of concern to groups like SALT fall victim to the overwhelming Republican majority in the House of Delegates.

“‘Left in such-and-such committee or Left on the Table by voice vote’ — that just means they killed it,” said Del. Mark Levine (D-45).

Deciding on a proposed piece of legislation by “voice vote” is another tactic to forestall any discussion of an issue, according to Murphy. Republicans control the committee memberships and the schedules. The lawmakers on the panel said it was not uncommon for Democrats to be placed on committees with conflicting schedules. When the time comes for a bill to be voted on in a committee and the question “Move by Motion” is asked, the “silence is deafening,” she said, since any Democrats who might have supported the bill were engaged in another committee.

It’s in the committees and the sub-committees that the “real work gets done,” said Levine. That was when citizen testimony and support would be most valuable, he remarked, but under the current system, “interested parties might get a call at 6 p.m. the night before a bill is to be read and told if they want to be heard, they need to be in Richmond for a 7 a.m. start the next morning.” This just isn’t right, according to Levine. “The public has a right to know and to participate.”

Issues that have captured national attention were also hotly debated topics in Richmond this year — issues like immigration and voting rights, redrawing electoral districts, and minimum wage rates. Del. Eileen Filler-Corn (D-41) was disappointed when her bill, HB 2405, which would have allowed newly-minted American citizens additional time to register to vote, was “left in the Privileges and Elections Committee.”

Tim Dempsey of Arlington asked about Minimum Wage increase efforts, unions, and redistricting. Del. Marcus Simon (D-53) and Marsden explained how they couldn’t get traction for their bills. “$7.25 per hour is not a living wage,” said Simon, who denies that the entry wage rate is primarily applied to students and trainees.

State Sen. George Barker (D-39) was one of the speakers who tackled the issue of redistricting. “Nothing on reworking our electoral districts passed this session.” Barker strongly believes that redistricting is essential to insure real representation of “all the people.” He offered several alternatives that would promote “balanced and competitive” elections and foster diversity in the elected ranks.

Marsden added that a bill had been vetoed that would most certainly have “suppressed votes among lower income and minority voters, particularly in urban areas” by requiring a driver’s license to cast a ballot.

THINGS TURNED a bit emotional for audience members and elected officials alike, when Jisan Zaman of Arlington, came to the microphone with a question. Zaman, a software developer for a company in McLean, apologized several times as he became visibly shaken while asking his questions. “I am sorry. I usually don’t have trouble with public speaking,” he said, “but I am scared. I am Muslim. I am American. But I am scared of a Muslim registry, and of all these hate crimes. What will you do to protect people like me? Will you stand behind me?”

Several members of the audience rushed to hug Zaman in support, and the panel all rose to applaud him. Several of the lawmakers responded.

Del. Mark Keam (D-35), born in Seoul, South Korea, has been a citizen of the United States for some 25 years, but admitted that in these heated times, “I try to carry my passport more often and keep my Naturalization papers nearer to hand.” Keam said that dialogue about race and ethnicity and all areas of differences between people needs to be honest and open. “Let’s face it. Most of the people in this room won’t be affected by Trump and his administration on this issue. But people like myself, or Mr. Zaman, or others with darker skin tones … might very well be.” Keam also reminded the audience that it was a Democratic President who signed the orders to allow the imprisonment of Asian Americans in United States during World War II. “We all need to be alert.”

There were other successes to be applauded in the 2017 General Assembly Legislative Session. Del. Jennifer Boysko (D-86) pointed to a bill that now makes prescription Naloxone more available for use in treating heroin drug overdoses. Murphy noted the passage of a bill that would better protect students attending for-profit schools, and another that provides parents with class size information for middle and high school students.

The forum ended with the lawmakers vowing to continue to press for an agenda that includes and protects all Virginians, “but we need you,” said Levine. “When government goes off the rails, we the people are in charge.”

Legislation can be tracked by Patron, by topic, by pass or defeat status, or by browsing the entire list at www.lis.virginia.gov. SALT invites the public to learn more about their education and advocacy efforts at www.S-A-L-T.org.