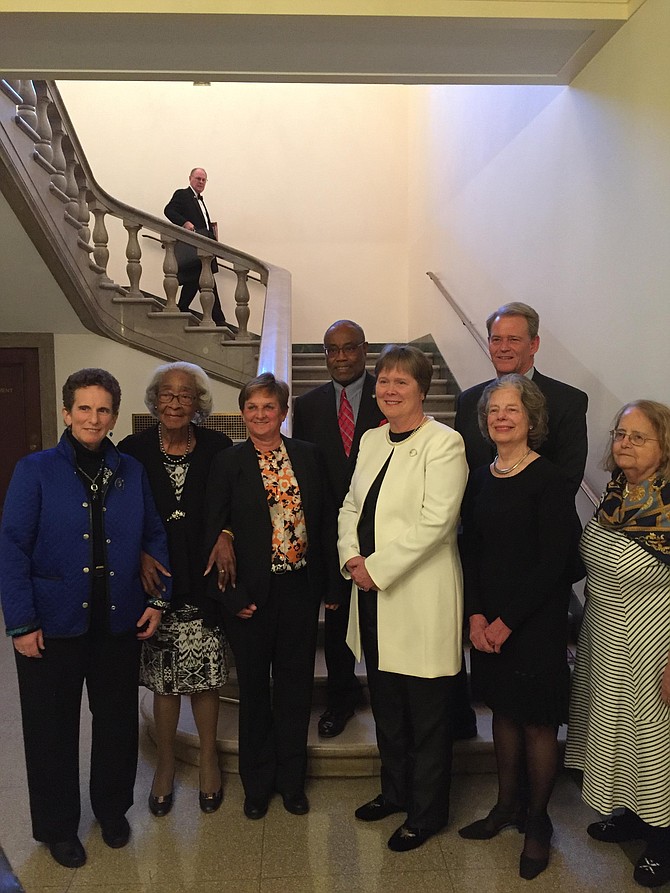 Alexandria is a city of living history. Beyond the colonial era buildings and the significant landmarks across town, the Living Legends of Alexandria seeks to identify, honor, and chronicle individuals who have made significant contributions to the quality of life in Alexandria. At its awards ceremony on March 16 in the George Washington Masonic National Memorial, eight Alexandrians with backgrounds in civil rights, local philanthropy and public service were chosen as this year’s Living Legends.

The ceremony also marked the 10-year anniversary of the program, which started in 2006 when local artist-photographer Nina Tisara was working on obituaries and discovered that many people whose lives she was documenting had not been photographed.

“In some ways, I feel like I have no right to be here,” said Tisara as she looked out at the reception with dozens of past and present Legends. “Just think of all these people: the brilliants minds and energy all gathered in one place. I was just a photographer. I was lucky.”

The program’s roots are in Tisara’s photography, which she said gave her a passport into different communities she’d never been to before.

“The purpose of Living Legends is to document our current history,” said Tisara. “Whatever circle or community you’re in, open your eyes and look around, see the people who should be recognized for their vision and determination.”

Two of those honored at the at the 2017 awards were former Mayors Kerry Donley and Bill Euille. Donley, currently senior vice president at John Marshall Bank, was first elected to Alexandria City Council in 1988. He served as mayor from 1996 to 2003, returning to the council for a term in 2010. As a councilor and mayor, Donley led the resolution for the Wilson Bridge reconstruction, zoning at Potomac Yards, bringing the Patent and Trademark Office to Alexandria, and pushing for capital funding for Samuel Tucker School and the Beatley Central Library.

“It’s an honor,” said Donley. “I always wanted to [be in public service]. I wanted to be a part of good public policy. I wanted to make a contribution. People are required to make this world a better place than they found it, it’s as simple as that.”

Euille’s public advocacy started as a child, working alongside his mother as she volunteered at Ebenezer Baptist Church and various local civic causes. After graduating college, he worked as an accountant at a construction company and later formed his own contracting firm in 1987. Two years after he graduated college, Euille became the youngest School Board member ever appointed and served on the board for 10 years. Euille also created the William D. Euille Foundation which supported the Alexandria Scholarship Fund and various programs for city youth. Euille was elected to City Council in 1994 and was elected as the city’s first African American mayor in 2003. Euille was also the city’s longest-serving mayor.

“It was an honor,” said Euille. “It’s a very competitive process. Honored to be named a living legend, and have respect for the others selected and honored as well. I continue to hope to live up to that title, being a legend, by mentoring and providing support [for young people in the city].”

Modell was one of only three women working at DASH when she took over as general manager 28 years ago. Modell credits fellow Living Legend Mayor Patsy Ticer with encouraging her and showing that women could push through barriers to make a difference in the workplace. During her time as the CEO and general manager DASH, the transit system grew from 17 buses to 80 and expanded its network across the city. Modell was also a longtime advocate for building a new transit center, which finally opened in 2009 to serve as a hub for bus transit in Alexandria. Modell retired from DASH in 2016.

“I’m humbled,” said Modell. “When I first found out I was chosen, I was overwhelmed. That I could be standing up here with so many great Alexandrians, it feels awesome.”

Weber has dedicated more than 50 years of her life to journalism, including 14 years as editor of the Alexandria Gazette-Packet. Weber also assisted with the founding of the Living Legends program, and has served for 10 years on the Alexandria Community Services Board, a group of volunteers appointed by the City Council that oversees use of public funds to provide mental health, intellectual disability and substance abuse services. Over the years, Weber has served on a variety of boards and commissions working to benefit Alexandrians with mental health issues.

“It’s exciting,” said Weber, “It’s all so unreal. There’s so many people here that do so many things for our city.”

Walker doesn’t just sell homes in Del Ray, she’s part of the ongoing work to build the neighborhood as a community. Cinema Del Ray, one of Walker’s projects, is one of the most popular events in the Del Ray neighborhood. The summer program features movies on the field at the Mount Vernon Recreation Center and regularly draws crowds of local parents and children.

“It’s humbling,” said Walker. “I feel like there’s so many people that deserve this award. And being around everybody here tonight, it’s great. I was particularly honored to meet Colonel Underwood.”

Even among a prestigious crowd, Underwood was treated with particular reverence. Underwood is a World War II veteran and was the first African American woman promoted to the rank of colonel in the United States Air Force Reserve. Underwood enlisted in 1943 and trained as an emergency medical technician. In 1963, Underwood and a group of friends took a train from New York to Washington D.C. to participate in Martin Luther King Jr.’s March on Washington. In 1979, her last assignment brought her back to the region, where she led a special project for the National Medical Association’s children’s immunization program in Alexandria. Underwood retired from the military in 1985 and became director of nursing at Woodbine Convalescent and Nursing Care. After her retirement from the military, Underwood also became involved with local civic engagement, became chair of the Alexandria Commission on Aging and helped to found the Alexandria Black History Museum, where she still volunteers. Underwood has also served on boards for Inova Alexandria Hospital, Hopkins House, the Alexandria Society for the Preservation of Black Heritage, and Living Legends of Alexandria.

Flemming is a third generation Alexandrian, and said her parents set the example for her at a young age in emphasizing public service. Flemming also said she knew Elizabeth Anne Campagna, founder of Alexandria’s Campagna Center, who helped her understand that it was a pleasure and responsibility to help those in the city who weren’t as fortunate.

“It’s a great thrill,” said Flemming. “Alexandria is my home, to be honored like this, it’s quite exciting.”

“You meet such great people,” said Flemming. “You meet people of all ages and backgrounds who really enrich your life. You think you’re giving to them, but they’re really giving to you as well.”

“It’s very exciting,” said Mullen. “I’m truly honored. It’s nice to think that there’s someone like Nina [Tisara] chronicling what the people in Alexandria are doing.”

Like Flemming, Mullen said she grew up in a family where her parents emphasized getting involved and helping out in the community. From 1993 to 2001, Mullen served as the executive director of the Scholarship Fund of Alexandria. While there, Mullen worked to build new corporate partnerships and expand fundraising efforts. Mullen was able to nearly triple the number of scholarships awarded by the program, from $100,000 in 1993 to $288,000 in 2001. From there, Mullen became executive director of Senior Services of Alexandria and founded the program’s annual fundraising gala. From 2006 to 2016, Mullen became executive director of the Alexandria Tutoring Consortium, tripling the number of students served by the program from 75 in 2005 to 220 in 2013. Even in retirement, Mullen still actively advocates for each of the causes she spent her career promoting. Mullen says her next advocacy boost will be trying to raise Alexandria’ graduation rate.

“I just see things that need to be done,” said Mullen. “It’s all about leveling the playing field. So look around you, in your community: see what still needs to be done.”