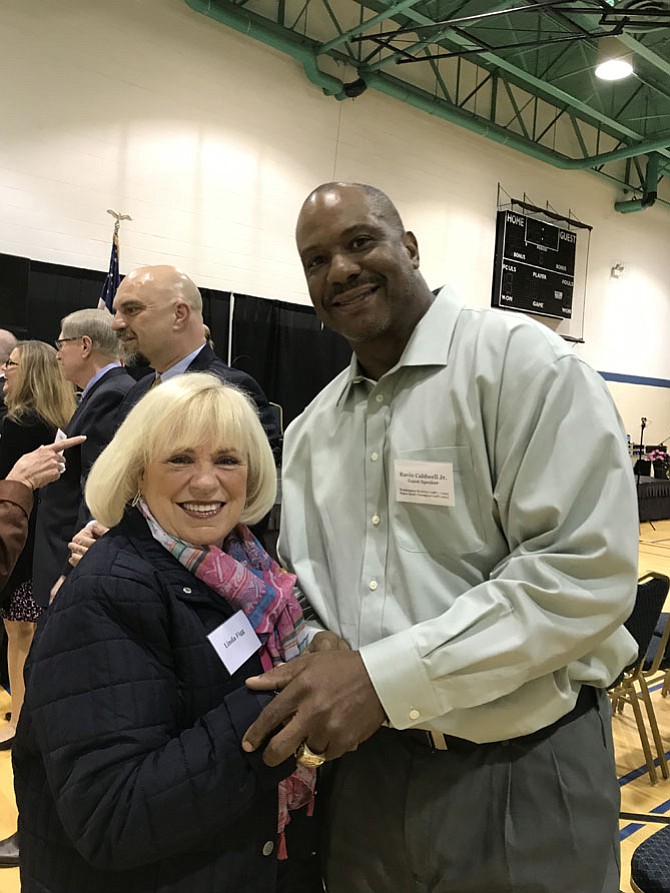 The Town of Herndon honored 430 volunteers from 35 different service organizations and groups on Sunday, April 23 at the 33rd Annual Mayor's Volunteer Appreciation Night held at the Herndon Community Center. Invited honorees contributed 100 hours or more of service to the community during the last year.

According to Mayor Lisa Merkel, The Mayor's Volunteer Appreciation Night has been held annually since 1985 when it was the brainchild of then-Mayor Rick Thoesen. Merkel reported that since the event was first introduced, the town has celebrated the accomplishments of 11,000 Outstanding Volunteers and more than 100 Distinguished Volunteers.

The evening's special guest speaker was Ravin Caldwell Jr., former Washington Redskin linebacker, a two-time Super Bowl Champion, but even more notable, an individual active in community service. Caldwell shared with the audience that as a Redskin linebacker he was forced into volunteering, an important aspect of being a Redskin as every Tuesday was “volunteer day.”

Merkel explained each year Herndon honors three Distinguish Volunteers. It is the Town's highest level of Recognition Award and is presented to individuals who have shown exemplary service over several years or engaged in projects that required leadership roles. This year the town received eight nominations.

The first Distinguished Service Award was presented to an individual who had, Merkel said, "her fingerprints throughout our community." Merkel said the individual chairs the Arts Committee and Annual Tea for her club and is its Recording Secretary. She also donates her electrical and painting skills to help refurbish homes for seniors in the Herndon/Reston area, as well as volunteer at Artemis House for victims of domestic violence. The Herndon Fortnightly Club nominated her. The award went to Vickie Herman.

The second Distinguished Service Award went to an individual who had volunteered for more than 40 years and served as a board officer for 29 of those years. He was a graduate of the very first Herndon Police Citizen's Academy and served countless hours on perimeter control at major town events. He was vital in the creation of Police Volunteer Support Teams in Purcellville and in Leesburg. The second award winner was Guy Masters.

The third Distinguished Service Award went to an individual Merkel described as, "a true lover for her neighbors." Merkel added that the person had served in all leadership roles of her organization, and successfully lead a holiday food program for more than 350 families. Also, she took the lead for LINK on a new community partnership, where bags of food are filled for families, collected and then distributed. The third Distinguished Service Award went to Betty Eidemiller.

During her remarks, Merkel recalled a quote she had recently read by Rabindranath Tagore, and had thought of all the volunteers that would be gathered this night. Merkel read, "I slept and dreamt that life was joy. I awoke and saw that life was service. I acted and behold, service was joy."

In closing, on behalf of the entire Town Council, Merkel said, "Each of us on the Council thanks each of you as an individual and all of you collectively for all do for our Town, our community and each other."