The Valor Awards in Alexandria
Votes

The Valor Awards in Alexandria

Tales of police and firefighter heroism. 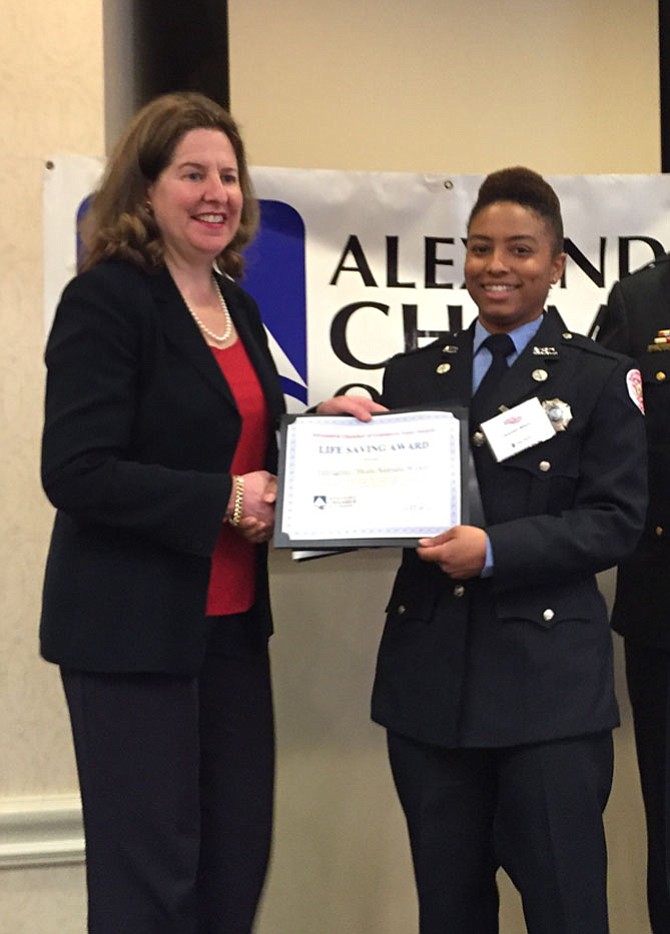 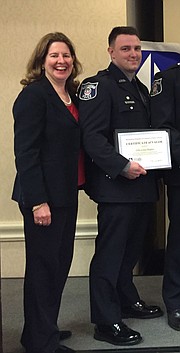 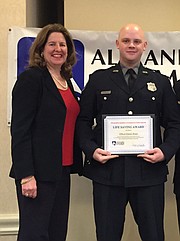 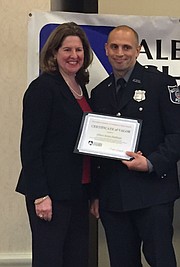 Private security contractor Marcus Johnson (center) Mayor Allison Silberberg (left) and Alexandria Chamber of Commerce Chairman Dak Hardwick (right). Johnson witnessed a police officer being assaulted and stepped in to pull the suspect away from the officer. Though injured in the struggle, Johnson was able to help the officer restrain the suspect until more police arrived.

In a critical situation, a few seconds can make the difference between life and death. A wrong decision or a moment of hesitation can turn a “shots fired” call into a homicide case. The wrong step can mean someone on the edge of a building plummets to their death. On April 26, the Alexandria Chamber of Commerce’s Public Safety Valor Awards honored those who made the quick decisions in emergency situations; fighting to save the lives of others, sometimes at the risk of their own.

Alexandria Firefighter-Medic Kaandra Wilson was on her way back home from on a trans-Pacific flight when an emergency struck. A 70-year-old man who spoke only Mandarin was traveling with his son and had trouble walking to the bathroom. His blood pressure cup indicated that the pressure was 90/50 and starting to fall. Flight attendants asked if anyone was available with medical experience. After no one else came forward, Wilson rushed forward to help the man. His heart had stopped. Kaandra and another passenger began doing CPR and established a relay team to keep the CPR going for over three hours until the plane landed. However, once paramedics came on board the man was pronounced dead. For her efforts, Wilson was presented with a lifesaving award.

Deputies Valarie Wright and Charlie Winstead were working security at the opening night of the Landmark Mall carnival on March 25 when a scuffle broke out. The argument grew more heated and a 15-year-old boy was stabbed in the lower chest. The deputies secured the victim and tries to keep the crowd away. However, those the boy had been arguing with and others in the crowd had gathered around were preventing the ambulance from reaching the victim. Deputy Fire Marshal Joe Zarkauskas arrived and worked to keep the crowd away from the critically injured boy. Winstead put the boy into his cruiser and transported the victim to the medics, who took him to the hospital where he was ultimately saved. Wright, Winstead, and Zarkauskas were awarded bronze medals.

At the 11th floor of an apartment complex on May 17 in the mid-afternoon, a man had decided to kill himself. He’d called his family members and had said his goodbyes. As his girlfriend notified the police, he was getting ready to jump. When Sergeant Michael Nugent arrived, the man had begun to climb over the railing and was staring at the ground. More police arrived, but the victim would not leave the balcony to answer the door. Officer Joel Hughes was able to breach the door and rushed to the balcony. Hughes grabbed the subject and kept him from falling. While the victim struggled with Hughes, Officers Hayden Johnson, Patrick Kunz, and Officer Stephen Riley IV were able to pull the man back onto the balcony. The victim was taken to Inova Alexandria Hospital where he received treatment. Hughes and Johnson were both presented with Certificates of Valor while Kunz and Riley were given Lifesaving Awards.

By the time Officer Daniel Watts arrived at the apartment complex, the 37-year-old victim was not breathing. Watts was responding to a call of a possible drug overdose on May 26, and Watts found the man unresponsive with a blue pallor to his skin. Watts immediately began to perform CPR and was able to re-establish a pulse. The victim was revived and taken to a local hospital. Watts was presented with a Lifesaving Award.

By the edge of the Potomac River, a brawl had broken out. Officers Steven Matthews and Matthew Wilson were working in the Canal Center Plaza on July 19 and observed two men fighting. The officers ran the 200 yards to reach the fighting men, but by the time they arrived both had tumbled into the river. One went unconscious, but the second man continued to assault him. While Wilson took the assailant into custody, Matthews rescued the unconscious victim from the water. The officers pulled both to the shore and the victim was transferred to the medics for assistance. Matthews and Wilson were presented with Certificates of Valor.

A 22-year old woman had chosen the overpass above Holmes Run Creek as her suicide destination. On Aug. 29, Officer Johnny Larios was on patrol when he observed her standing outside the railing and leaning forward. Larios approached her and tried to speak to her, but she did not want to speak to him and stepped closer to the edge of the overpass. While speaking to her, Larios saw Officer Yuri Mikhin approaching from behind. Larios continued to distract her while Mikhin grabbed her under her arm and began to pull her towards safety. She struggled, but Mikhin, Larios, and Officer Daniel Reeve were able to pull her to safety and get her to the local hospital for counseling. Mikhin, Larios and Reeve were presented with Lifesaving Awards.

After getting into an argument with her girlfriend, a woman sent her girlfriend a series of suicidal statements and started to make her way towards the Potomac River. The victim’s girlfriend notified the police, who were able to track the victim’s phone to Old Town near the waterfront. When police finally found the victim on a concrete barrier in Waterfront Park, she leapt into the river and tried to submerge herself. Other units started to arrive and both D.C. Police Harbor Patrol and Fairfax County Fire Department's Water Rescue Units were called to the scene, but Fire Marshal Andrea Buchanan realized neither would get there in time to rescue the victim. Buchanan shed her tactical vest, firearm, and boots. Sergeant Jesse Meekins and Officer Matthew Parker also shed their equipment and all three jumped into the river and swam towards the victim, who was at that point 30 feet away from the ledge. The victim submerged herself in the water and was no longer visible. Parker reached underwater and finally found the victim’s foot. He was able to pull her to the surface, with Meekins and Buchanan grabbing her arms. All three were able to pull the victim back to the waterfront. Meekins, Parker, and Buchanan were presented with Certificates of Valor.

A domestic dispute had turned violent, and early on Aug. 14 there was already one bleeding victim on the scene when the police arrived. A female victim was in front of the house, bleeding from her mouth, while her boyfriend was inside the house. The suspect had moved into the backyard with a knife and stated that he was going to kill himself. Officers watched as the man used a knife to slit his own throat before walking back into the townhouse. Police followed him inside and found him upstairs, collapsed behind a closed bedroom door. Sergeant Patrick Taylor used his body to force open the door, where they found the victim conscious with a large gash across his neck. Taylor rushed in, kicking the knife away, while he and Officer Osama Sharif attempted to secure the 6’3” suspect who was intoxicated and severely injured. Officer Alex Shin helped hold the suspect down and removed a second knife. As the suspect tried to push himself away from the officers, Shin tasered the suspect in the back. The suspect was sedated. Shin and Sarif were able to help carry the suspect o the ambulance. Taylor, Sharif, and Shin all received certificates of valor.

Responding to a call of multiple gunshot wounds, police were dispatched to the 4600 block of Duke Street on Sept. 22 and found a taxi driver shot several times in his upper chest. Sergeant Michael Rodriguez immediately requested medic support and additional officers while he began to treat the victims’ wounds. He applied pressure and was able to stop the bleeding sufficiently for the victim to be transported by medics. Despite his extensive wounds, the driver survived. Rodriguez was awarded a Life Saving Certificate.