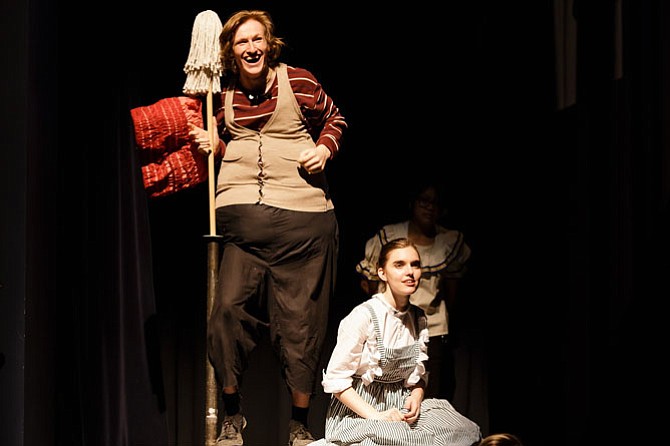 From left: Nick Dache and Sean Cody in Woodson High production of “Peter and the Starcatcher.” Photo by Pam Hardin

A gentle hush fell over the audience Saturday night as the lights went out in W. T. Woodson's auditorium; you could nearly feel the buzz of anticipation that coursed through every member in that large crowd. When the lights went up on stage, the audience was transported to the wonderful, whimsical world of "Peter and the Starcatcher." We laughed, we cried, and most of all, we enjoyed the amazing performance put on by the Woodson Drama department. With strong leads, hilarious comic actors, versatile set, and creative dramaturgy, there was no reason not to enjoy the show that night.

“Peter and the Starcatcher,” performing on Broadway in 2009, is based off of the original 2004 novel written by Dave Barry and Ridley Pearson. The tale is far from your average "superhero origin story." We learn just how Peter got his name and how he and his friends, Ted and Prentiss, became what we know as "The Lost Boys." We also meet a new character in this iconic character's prequel. Molly Astor, a strong-willed and independent young girl, helps Peter truly discover himself as a person. Along the way, we meet the poetically villainous Black Stache and his right hand man, Smee. Despite the two and their crew being written as the antagonists, you can't help but fall in love with the iconic jokes and references they make you laugh with. Woodson Drama poured their heart and soul into this performance and connected the audience through the whimsical magic of childhood and imagination.

The cast had incredible leads that the audience just couldn't keep their eyes off of. Peter (Jack Hopewell) and Molly (Caroline Orejuela) had excellent stage chemistry and played off each other nicely. As individuals, they were just as strong, but the bond the two shared on stage was evident towards the end of act one and the entirety of act two. Their energy was infectious throughout the cast and helped each member truly shine.

In addition to strong leads, there were equally strong comic characters that nearly stole the show. Black Stache (Caroline Grass) made the audience roar with her comedic bits, including the deliberate use of malapropisms, or the switching of words that sound similar but mean something entirely different for comedic effect. Moments like using "dike" instead of "deck" and "butch" instead of "beach" had the audience roaring. Black Stache's trusty sidekick, Smee (Meryn Holtslander), was also able to extract a few stomach-clenching laughs from the audience. Holtslander and Grass were a match made in theatre heaven. The two played off of each other so well and were able to make the audience thoroughly laugh.

"Peter and the Starcatcher" is known for its technical prowess; in 2012, it won four Tony's for its tech team. W. T. Woodson's team was no exception and did an excellent job living up to the high standards the original Broadway cast had placed. The costumes and makeup allowed for the actors to truly morph into their characters, especially the mermaids, with their colorful makeup and tails. The set was incredibly versatile and clever, allowing for several settings all in one set piece. The props were also extremely detailed, and a favorite was the magical necklaces that allowed Molly and her father to communicate.

All in all, the entire cast and crew of W. T. Woodson's production of "Peter and the Starcatcher" should be very proud of their performance and deserve nothing but the best for their hard work and dedication to the theater community.