FTD — the ‘Other’ Dementia
Votes

FTD — the ‘Other’ Dementia 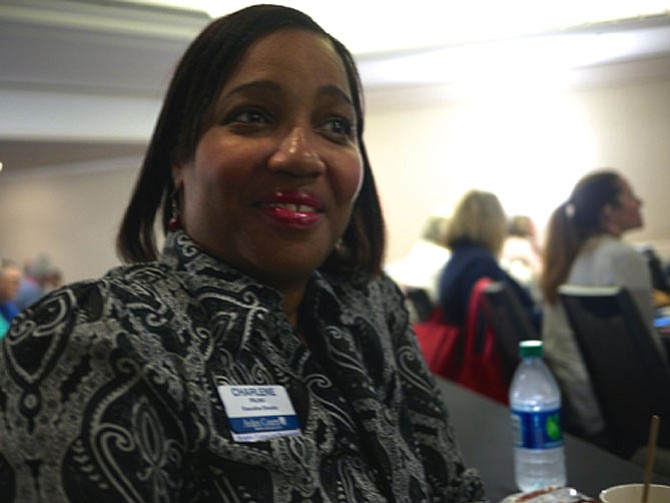 Charlene Palma, CDP, executive director of Arden Courts in Potomac, Md., said the caregivers at Arden Courts are trained to know the difference between Alzheimer’s and FTD. Caregivers are specially trained to provide different therapies to FTD-affected clients. “My mom’s an RN, My grandmother was an LPN, and I did my undergrad in gerontology,” she said. “Taking care of people is in my genes. We know the difference a caregiver can make in the life of a dementia patient; these patients can still do things.” Arden Courts also has a facility in Annandale. Photo by Eden Brown.

What a brain affected by FTD looks like: lots of empty space.

Awareness of the “other” dementia is just beginning. This book “What if it’s not Alzheimer’s?” is a recommended text for people who want to understand FTD.

The conference was the best attended yet of the annual AFTD meeting, with more than 300 registered attendees. This year’s event also included FTD-affected people, who were able to provide advice on how to manage the disease.

Keynote Speaker Dr. Halima Amjad talked about her father and his FTD. She said she was concurrently pursuing an M.D. (Medical Doctor) and an “DFTD” (Daughter of a Dad with FTD) degree as she watched and learned from her father’s illness. She is an assistant professor of Medicine in the Division of Geriatric Medicine at Johns Hopkins University. To read her essay about her father, see: http://www.johnahartford.org/blog/view/dementia-caregiving-returning-to-the-village.

Family members said, more than once on Friday, that Frontotemporal Dementia (FTD) is the other dementia few doctors mention when patients come in describing cognitive changes. Usually the diagnosis is “Alzheimer's” or normal aging, Parkinson’s, vascular dementia, or mini-strokes. Sometimes it’s depression, or bipolar disease.

The Annual Education Conference 2017 of the Association for Frontotemporal Degeneration (AFTD) held May 5 in Baltimore shed some light on the disease and offered support to those affected by FTD. Dr. Chiadi Onyike, a neuropsychiatrist and associate professor of Psychiatry and Behavioral Sciences at John Hopkins University, and director of the Johns Hopkins Frontotemporal Dementia and Young-Onset Dementias Program, talked about the symptoms of frontotemporal disorders, which gradually take away basic abilities: talking, walking, socializing — often striking people in middle age, when they are working and raising families.

According to the NIH, scientists believe FTD (Frontotemporal Dementia) may cause up to 10 percent of all cases of dementia. Roughly 60 percent of people with FTLD (the collective term for frontotemporal lobar degeneration) are 45-64 years old. There are three types of disorders: progressive behavior/personality decline; progressive language decline; and progressive motor decline. The disease has a genetic component in about 40 percent of cases, but more often the incidence is sporadic.

Onyike told the group of about 400 people that frontotemporal disorders are the result of damage to neurons in parts of the brain called the frontal and temporal lobes. As neurons die in those regions, the lobes atrophy or shrink. Unusual behaviors, emotional problems, trouble communicating, difficulty walking, or issues at work can occur. Clumsiness, neuromuscular weakness, the inability to find words, apathy and lack of empathy, and social-interpersonal changes are just some of the the symptoms that can appear in FTD cases. Their memories, however, appear more or less intact, and they enjoy activities, sometimes new activities they haven’t learned before.

Speakers at the conference acknowledged it is hard to diagnose FTD, but it is becoming easier thanks to ongoing research. A brain autopsy is the most definitive way to diagnose which kind of FTLD the patient has: loss of neurons and abnormal amounts of proteins called “tau” and TDP-43” accumulation in the FTLD neurons, for instance, tell the story clearly. If someone believes they or a family member has FTD, according to NIH, the best way to diagnose the disease in a living person is to record symptoms, put together a personal and family medical history, undergo a physical exam with blood tests, conduct a neuropsychological evaluation to assess cognitive functions, obtain brain imaging to look for changes in the frontal and temporal lobes, and go to someone who knows what FTLD looks like.

Speakers at the conference also noted research has now uncovered several different genes that, when mutated, can lead to frontotemporal disorders. Environmental factors that may influence risk for developing the disorders are also being researched. Families affected by inherited and familial forms of FTD can help research progress by participating in clinical studies and trials. The AFTD works to support families affected by the disease and to suggest useful therapies and strategies for communication.

Locally, resources for FTD are growing, but still nascent. Arden Courts Memory Care Community is offering a free dementia education seminar on May 9 from 2-3:30 p.m. at the Radisson North Baltimore, 2004 Greenspring Drive, Timonium, Md. AFTD runs FTD caregiver support groups in the Middle Atlantic Region, the closest of which to Northern Virginia is at the Arden Courts Kensington, in Kensington, Md. Contact Elaine Rose at errose36@gmail.com for information.

In addition, if a diagnosis is still pending and it may be the “other” dementia, attendees at the AFTD conference agreed the Johns Hopkins FTD Clinic was the best nearby location for diagnosis, or see a neuropsychiatrist or a neurologist who is conversant with the disease.