Where Time, Talent, and Memories Meet 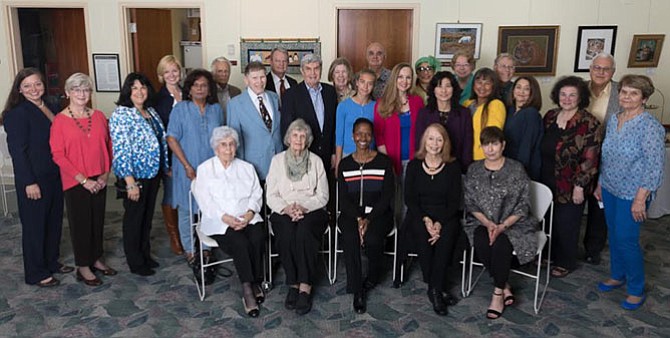 By By Christina Tyler Wenks

Mary Dacoba is one of the Great Falls Writer's Group’s "matriarchs" to whom this anthology is dedicated. Founder Kristin Clark Taylor listens as Dacoba talks about publishing her first book at age 97 — a life goal she accomplished with the encouragement of members of the group.

third collaborative book effort. “And This I Give to You” is a collection of memories by the Great Falls Writer’s Group intended to inspire the next generation.

A crowd spilled from the Great Falls Library community room into the hall Saturday evening as book enthusiasts visited with writers and listened.

“As you read these stories, you will think about what you have in your life that is meaningful that you do not want to see disappear,” said editor Myrna Stuart.

“When I think what I inherited from my mom, what I cherish the most is my love of music,” said Lisa Dorr, who wrote about an old copy of Albert DeVito’s 1964 Pocket Dictionary of Chords, which is reminder to push past fears of stage fright or what life brings and persevere.

Dorr is the daughter-in-law of aviation and military historian Bob Dorr to whom the GFWG 2016 anthology was dedicated. The late Dorr’s words sustain themselves in the writing of his children.

Members consider themselves part of a writing family and this book is dedicated to its matriarchs, Mary Dacoba, 97, and Catherine Mathews, 91, who have been part of the GFWG since its first meeting several years ago.

“Never in my nine-plus decades did I think I’d publish my own book, but with the Great Falls Writer’s Group, I finally had the courage to gather my writings,” Dacoba said about her first book, “97 Years.” Dacoba is working on a second compilation of essays she says are “about our nation’s current political situation.”

After joining GFWG several years ago, Mathews says she grew braver as a writer online. “It was terribly hard to read anything that I’d written or speak up and say anything, but I’ve gotten over that,” said Mathews. “I’ve seen the world go through so much change. I write about a time that not everyone has lived.”

“Hold tightly to positive memories. If they are important to you then not one is too small to share,” said Stuart.

Sophie Tedesco, a teen author who spoke to finalists of the GFWG Youth Writing Contest a few weeks ago, also contributed to the anthology. She wrote about her relationship with Olympian and World War II prisoner of war Louis Zamperini and his message of resilience that shapes her personal drive. “His words ‘Don’t give up and don’t give in’ resonate with me,” said Tedesco. “If you put in the work now, you achieve something great in the end.”

"The annual unveiling of GFWG's annual anthology is becoming a creative showcase for the community. We've created a powerful, positive synergy that's kind of spread like wildfire throughout the community,” said Kristin Clark Taylor, GFWG founder. “We've learned how to celebrate our literary talent, and we've also learned how to throw a really good party.”