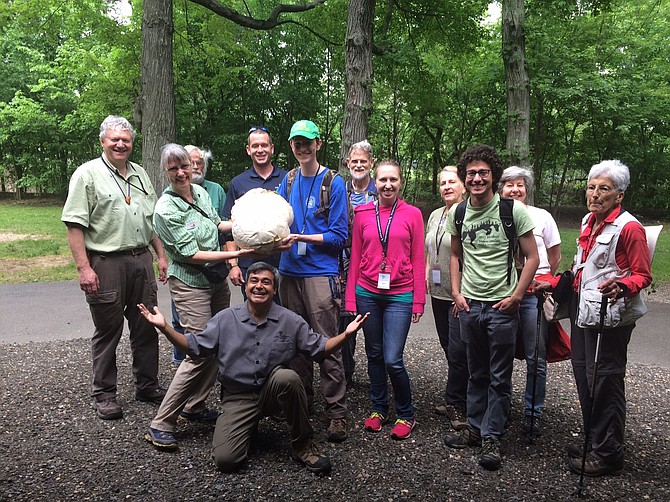 Arlington County Natural Resources Manager Alonso Abugattas crouches on the ground while volunteers gather around a fungus that mycologist Rachel Toman and her team discovered, known as a “puffball."

More than 90 citizens and scientific experts flocked to local parks on May 20 to find over 400 species during Arlington County’s first bioblitz. A “bioblitz” is a 24-hour biotic survey of an ecosystem used to evaluate its biodiversity.

The event kicked off at midnight as the Arlington County Department of Parks and Recreation installed eight cameras at Barcroft Park to take snapshots of wildlife. At 10 a.m., most volunteers arrived to the park. Many came from the department’s partner organizations such as The Tree Stewards of Arlington and Alexandria, the Master Gardener program, and the Arlington Regional Master Naturalist (ARMN).

Keeping a record of the presence or absence of each species will help the county to track and protect Arlington’s biodiversity. “If you want to preserve a species, you have to identify it first,” Abugattas said.

About five years ago, invasive species such as Multiflora Rose and the Japanese Honeysuckle threatened the biodiversity of Barcroft Park’s ecosystem. However, ARMN volunteers among others removed them. The native Mayapple now thrives. ARMN President Marion Jordan said, “We are proud to play our part protecting natural resources. We realize Arlingtonians can do more collectively than independently.”

Despite the pervasive threat of invasive species, discoveries of certain wildlife during the bioblitz reflect the strong health of Arlington’s ecosystems. Simmons and his team found a rare Black-Footed Polypore mushroom.

Warren Steiner, a retired research collaborator at the Smithsonian Institution, identified an Arrhenodes. Steiner, who walked through the forest barefoot and whose skin appears permanently tanned, found the weevil on the bark of a tree.

Both organisms indicate that humans have not irreversibly disturbed Barcroft’s mature forest.

At 4 p.m., the bioblitz culminated in the discovery of a circular, 40 centimeter in diameter fungus, found by mycologist Rachel Toman’s team. Most refer to the Calvatia Gigantea as a “puffball” because it emits smoke when its mature fruit body bursts. “The humongous puffball set an Arlington County record,” Abugattas said.

Teams also discovered species that experts did not record 10 years ago. Such findings include a Montane Woodland Seep, Highbush Blueberry Plant, European Elm Flea Weevil, and a Kissing Bug. Steiner said that although the weevil is non-native, it is too soon to determine if it has a detrimental effect on the park’s ecosystem.

The 24-hour bioblitz jumpstarted the department’s two-year survey of Arlington’s natural resources. Abugattas explained that the bioblitz exemplifies citizen science, in which residents function as the constant eyes and ears of their community’s ecosystems. “Arlingtonians are more than data collectors,” he said, “they preserve the county’s biodiversity.”