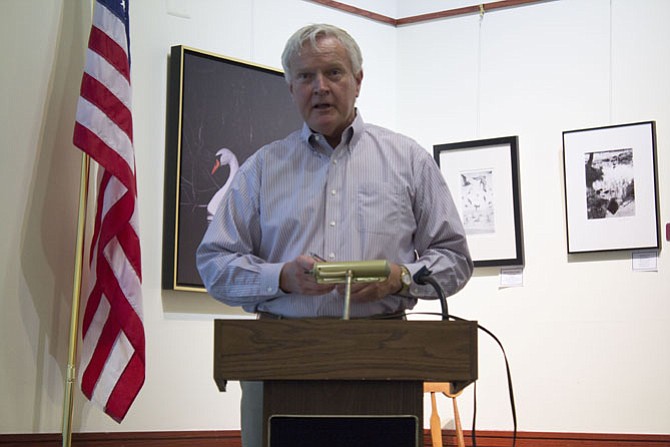 Bill Denk, chair of the Great Falls Citizens Association’s Environment, Parks and Trails Committee, organized the townhall so residents could learn how to take advantage of the green and open space provided by the county’s park authority, as well as other parks in the community. Photo by Fallon Forbush.

Timothy Hackman, Dranesville District Representative to the Fairfax County Park Authority, told the townhall that the parks heavily rely on activity and entry fees since less and less of general fund money is allocated to funding the parks each year. 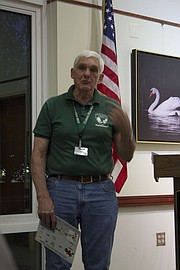 Gene Bacher, vice president of the Friends of Colvin Run Mill, talks about the mill’s programs and recent renovation. 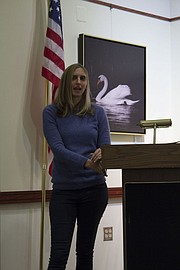 Julie Gurnee, spokesperson for the Riverbend Park, argues that her park is one of the most beautiful to walk through during the spring and summer.

Fairfax County spends millions of dollars a year managing its athletic fields, facilities and 427 parks on approximately 23,359 acres of land.

“We are really very fortunate to live in a beautiful area of Fairfax County and the area of Great Falls,” Timothy Hackman, Dranesville District representative to the Fairfax County Park Authority, said during the event.

The park authority was allocated $65 million from the county’s general fund in 2017 and has been allocated nearly $47 million for 2018, a decrease of nearly 30 percent.

Hackman, whose position on the board is unpaid, expressed gratitude despite the cut since the county was pinching pennies to meet its financial demands during this year’s budgeting process.

“I want to specifically call out the support of both the taxpayers as a whole and the Board of Supervisors for helping to fund such a great park system in Fairfax County,” he said.

Bill Denk, chair of the GFCA Environment, Parks and Trails Committee, organized the townhall so residents could learn how to take advantage of the green and open space provided by the county’s park authority, as well as other parks in the community.

With more than 800 acres, 15 miles of trails and 750,000 guests per year, Great Falls National Park is a major resource for local residents.

“I think a majority of [visitors] is really occurring on the weekends,” said Brent O’Neill, the site manager for the park with the National Park Service. He recommends visiting during the week to avoid traffic.

Swimming, wading, hunting and camping are not allowed in the park.

The park is currently recruiting people to be a part of its Potomac Paddlers Volunteer Corps, a volunteer group that assists the park in identifying and reporting incidents and watching out for risky behavior by visitors who may not understand the dangers of the river.

“We’re recruiting folks to help us be the eyes and ears in the park,” he said. “When it’s hot in the summer, everybody wants to go swimming … stuff happens.”

But there are many outdoor recreation opportunities, including hiking, bicycling, bird watching, boating, climbing, fishing and horseback riding.

Another program that the park will be participating in is helping doctors issue park prescriptions.

“The National Park Service is engaging with the medical community to have information available so that doctors can prescribe parks for people’s physical emotional and mental health,” he said.

ParkRxAmerica.org compiles information and maps of parks and open spaces. The nonprofit organization started compiling its database in Washington, D.C., and is now beginning to expand in the hopes that the prescriptions will help more Americans who suffer from chronic illnesses to spend time in natural environments and decrease their symptoms.

Fraser Preserve has about two miles of easy walking trails and boasts about 110 species of birds, including the bald eagle, and 300 varieties of wildflowers.

More than 700 fifth-grade students from Washington, D.C., visit the park each year for two-night camping trips in the lodge that is on the property, according to Adam Procell, a spokesperson for the Living Classrooms Foundation, a nonprofit organization that develops experiential learning activities for students.

“The majority of the kids that come out are from Title 1 schools, which are underfunded, underserved schools,” he said. “We try to make it into more of a summer camp experience since most of the kids could never afford a trip like that.”

Title I schools qualify for Part A (Title I) of the federal Elementary and Secondary Education Act. This legislation provides financial assistance to schools with high numbers or high percentages of children from low-income families to help ensure that all children meet challenging state academic standards.

The park is located at the end of Springvale Road in Great Falls.

The Seneca Regional Park on Seneca Road in Great Falls is an equestrian-friendly park with a trail network for horseback riders.

It is also a good spot for hiking trails, as the park is bisected by the Potomac Heritage Trail that extends from Loudoun County, through the Seneca Tract, to Riverbend Park, and further south to Great Falls where it connects with the Fairfax Cross County Trail.

“The Seneca tract is about 460 acres,” said Dustin Betthauser, a spokesperson for NOVA Parks. “That’s the largest parcel that we have.”

One of the most popular programs for the Northern Virginia Regional Parks is the Roving Naturalist Program, which leads visitors on guided nature walks, hikes, canoe and kayak tours, night explorations, stream and pond studies, as well as live animal programs.

“We would like to increase the number of interpretive hikes,” he said. “It’s a wonderful resource and one that I think needs to get a little more attention.”

Betthauser also told the crowd that he would be open for more Girl and Boy Scouts to come for cleanup days or to focus Eagle Scout projects around maintaining the park.

Though the bloom is past its peak, there are still many Virginia bluebells flowering throughout the park.

She encouraged the crowd to come to the visitors’ center to experience the new interactive children’s area.

The Friends of Riverbend Park will be hosting a barbeque benefit at the park’s visitors' center on Saturday, June 3, from 6 to 9 p.m. Wine and beer will be served on the deck followed by a barbeque dinner catered by Mookies of Great Falls. Campfires for s'mores and boat rides on the river will also be available. Tickets for the event are $50 per adult ($20 tax-deductible); $25 per child ($10 tax-deductible); and $125 per family ($50 tax-deductible). Registration is online at www.forb.wildapricot.org.

The four-floor mill at Colvin Run was renovated in 2015 when it received grant funding from American Express and the National Trust for Historic Preservation, said Gene Bacher, vice president of the Friends of Colvin Run Mill.

“With the park authority’s money and the money from American Express, we were able to put the equipment in for the top two floors,” he said.

The miller’s house on the property is now being renovated.

“The park itself, at the moment, looks as spiffy as it has looked since I’ve been there,” he said.

Grain grinding events occur the first and third Sundays of each month from noon to 3 p.m. There are also blacksmithing demonstrations the first Sunday of every month from 11 a.m. to 3 p.m.