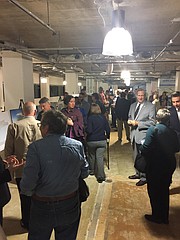 After over a decade of stalled development and design compromises, the main aquatic center building at Long Bridge Park is beginning to take shape. Four designs have been put forward as the final selections for the Long Bridge Park design. At an Oct. 19 display in Crystal City, four developers pictured their concept designs for the new aquatics and recreation center.

Development of Long Bridge Park as a recreational space was approved in 2004, with aquatics cited as one of the largest needs in this region. The project was delayed in 2014 after proposed designs exceeded the projected $79.3 million cost. The overall size of the project was scaled down by 37 percent, with nearly every part of the project made smaller. The new plans include smaller pool spaces, smaller storage rooms, smaller lobbies, etc. Each new proposed design contains a 50-meter pool, 1, 3, and 5 meter diving boards, a family pool, and health and fitness spaces.

The price for the building is fixed at $54.7 million for construction with a total project budget of $67 million. According to Erik Beach, part of the county’s agreement with the developers is that county is not liable for costs exceeding the established price.

Residents of the nearby neighborhoods say the new building is long overdue.

“This has been a long time coming,” said Carol Fuller from the Crystal City Civic Association. “I’m very pleased. It’s something that has been missing. All three of the local civic associations are supporting this. This area has very few recreational facilities. We don’t get a lot of recreational opportunities here. We’re frequently on the losing end of the stick.”

Local residents said they were happy with the pool amenities, but were somewhat baffled by all of the designs’ inclusion of an extensive gym area.

Some residents were from other parts of the county but planned on travelling to Long Bridge Park specifically to utilize the new facilities.

“I’m excited for the diving and the swimming,” said Dasca Hermosilla, from Ballston. “My son plays soccer at Long Bridge Park, so I’m excited to have other options [for things to do there]. My son is very excited about the big diving board.”

Construction at the site could begin as soon as July 2018 and is scheduled to open in 2021.