Offering Recreation in Arlington for Youths with Disabilities
Votes

Offering Recreation in Arlington for Youths with Disabilities 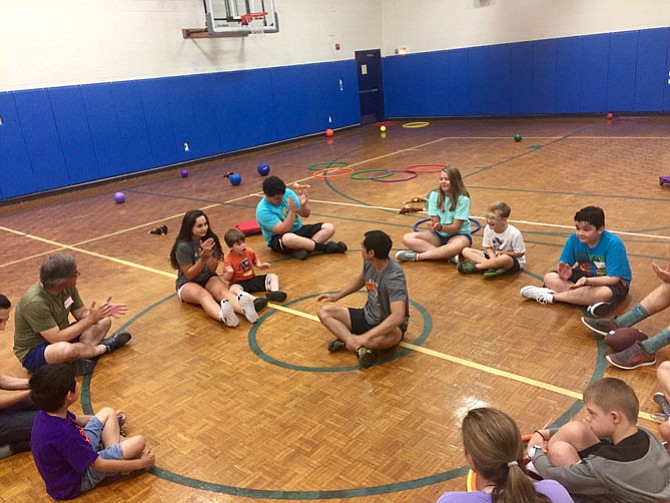 KEEN provides a variety of free sports and recreational activities for children and young adults with developmental and physical disabilities.

As part of its partnership with KEEN, the private Catholic high school hosts an open gym program called KEEN Arlington Sports, so that children and young adults with significant disabilities have place to socialize and exercise with their peers under the supervision of qualified, dedicated volunteers. O’Connell students now serve as regular KEEN volunteers.

“We are thrilled to have O’Connell’s support,” said Beata Okulska, executive director of KEEN Greater DC. “The school not only encourages their students to volunteer, but also provides us with access to their gym, completely free of charge. “

KEEN Greater DC touches hundreds of families every year through the activities it provides at no cost to families and caregivers.

KEEN was born in Bethesda, Md., in 1992 out of a single program — an open gym period held regularly so that youths with significant developmental disabilities would have a safe space to play a host of gym games and activities. This open gym program is much like the one that O’Connell now offers, where every attendee is paired with a volunteer for the entirety of the session.

While the open gym program remains popular, KEEN has since expanded to offer a robust portfolio of activities and classes to the Greater DC and Baltimore community of families of children with disabilities.

As KEEN adds more people and places to its rapidly expanding community, a few key things remain the same: Every single young person between the ages of 5 and 25 is accepted with open arms, and every single KEEN activity and program is free of charge. The ratio of participants, KEEN “athletes,” to volunteers, KEEN “coaches,” is 1:1 – and 2:1 for the athletes that need extra attention. The logistics are not only important for the wellbeing of the athletes, but, the structure also enables parents and caretakers time to themselves.

One of KEEN’s 25th anniversary goals was to establish a greater presence in Northern Virginia. Okulska said that KEEN leadership had good reason to zero in on O’Connell as an official KEEN facility.

“Our first Virginia programs were launched in 2010 in Springfield, followed by Vienna in 2013,” Okulska said. “This year, we launched in Arlington. Bishop O’Connell seemed like a natural choice for KEEN. The school has been involved with KEEN Greater DC for the past several years, and with encouragement from the school faculty, many O’Connell students have been volunteering on a regular basis at our other locations. Many of them developed unique friendships with kids with special needs and became very committed coaches at KEEN sessions.”

The values that O’Connell reinforces to its community align with KEEN’s mission: to create a place and community where even significantly challenged young people belong — and thrive.

“Because of O’Connell’s commitment to improving the lives of others, teaching their students to be tolerant, open minded, compassion and embrace diversity, KEEN found a compelling partner, especially when it comes to philosophy,” Okulska said. “We wanted young people with disabilities to be surrounded by friends who would embrace their ability and help them grow. All of that we found in Bishop O’Connell. We also knew that there were many kids in special needs who live in the Arlington area and we want to serve them.”

NOT ONLY does the partnership enrich everyone involved, but, it provides a way for O’Connell students to complete service hours that are required of them by the school’s Christian Service Program.

“We had so many students volunteering with KEEN before we started hosting the program,” said Kathryn Haas, who oversees all O’Connell service programs. “They had come to our service fair in previous years, and, when they reached out to see about us becoming a facility, it seemed like a great opportunity for both parties.”

Every other Sunday, O’Connell volunteers open KEEN athletes with open arms to their gym. Alongside their coaches, the athletes spend 75 gloriously unstructured minutes catching up with each other, shooting hoops, taking laps, or otherwise moving around O’Connell’s gym in any way they desire.

Haas said she’s already beginning to see the widespread benefits of teaming up with KEEN.

“I definitely think this is something that will turn into a worthwhile, longstanding relationship,” Haas said. “We’d be proud to make it a school tradition. It already seems like the students are really getting a lot out of it. They’re committed to making this something that they can really get involved with.”

LESS THAN SIX months into hosting the program, O’Connell already regularly hosts about 15 KEEN athletes every other weekend for this KEEN signature program. There are eight regular student volunteers, and each of them finds own meaning in the time they spend with the KEEN athletes.

“I like the atmosphere that the one-on-one setup creates during the Open Gym time,” said Gage Matty, a KEEN volunteer and O’Connell junior. “Since I play sports, the program drew me in. When I saw O’Connell offering it at a service fair, I immediately thought it would be a great opportunity. I’ve since bonded with a kid named Diego, who likes football just like I do. I get to bond with all of them, but, there is something extra special about my time with Diego.”

Diego Moreno’s family has been touched to see their son be able to escape the limitations that he’s so often burdened by.

“This is a wonderful program that has helped Diego in so many ways,” the Moreno family said. “One of the main reasons Diego loves this program is simply because every session is always so much fun. He says ‘I had so much fun with my teen friends.’ Diego has always been teased for his lack of speech, but, in KEEN, he feels he has true friends. He can be himself and be accepted without judgment. What is most important is that he is able to play with older kids and have that one-on-one relationship, the way he would if he had a big brother. Diego is an only child and has been dealing with therapies on a daily basis all his life. In the beginning, I saw KEEN as a social therapy activity, but I’ve come to know it as so much more — it’s like family.”

Matty added that he will definitely be involved with KEEN, and his time with Diego, until he graduates.

It often doesn’t take long before the high school volunteers start pledging long-term involvement with KEEN, long after they fulfill their requirements.

“I’ve been involved with the program since it began in May,” senior Julianne Ludwick said. “I had read a description of the program and saw that it was about sports, which drew me in. I went once, and after that, I was hooked, so I kept going.”

Ludwick’s passion for KEEN has grown along with the number of KEEN athletes who arrive at O’Connell every other Sunday.

“There weren’t nearly as many kids when I started, but, by the end of August there were around 15 that were coming regularly,” she said. “I really enjoy it. It’s really special to volunteer with the kids. Parents can go to the grocery store or do something for themselves for a quick hour while we work with them. Because of how great this is for everyone involved, I will definitely continue volunteering with KEEN after I complete my service hours. I don’t see it as yet another thing to do for school or college applications. I see it as a time to unwind and relax with the kids.”

In the end, everyone — regardless of disability status — just wants to have a little fun in life. And even if just for a few hours every month, KEEN seems to provide this both for volunteers like Ludwick and for participants.

“My son Jack loves KEEN,” Arlington parent Kristen Hartman said. “He is a really active kid and loves all of the different games and activities KEEN offers. He enjoys the one-on-one attention provided by the volunteers. He always looks forward to going.”

The KEEN cause is important on a personal level for Ryan Elder, another O’Connell senior.

“I got started because I have a cousin with autism,” Elder said. “I think I have a pretty deep understanding of how much parents need a break and how important it is for kids to both socialize with each other and be active. That’s so important, and I’m so happy to be a part of it.”

Elder’s relationship with one of the KEEN athletes is exactly the type of bond that KEEN sets out to create and nurture. When all's said and done, KEEN facilities like O’Connell are places where everyone connects without fear of being labeled or having their interactions defined by disability.

“I’ve gotten to bond especially with one 11-year-old kid with severe Attention Deficit Disorder (ADD),” Elder said. “I actually really relate to him because I have ADD. I think he’s just misunderstood. He always says he just wants to do what I want to do. We’re all just looking to connect.”