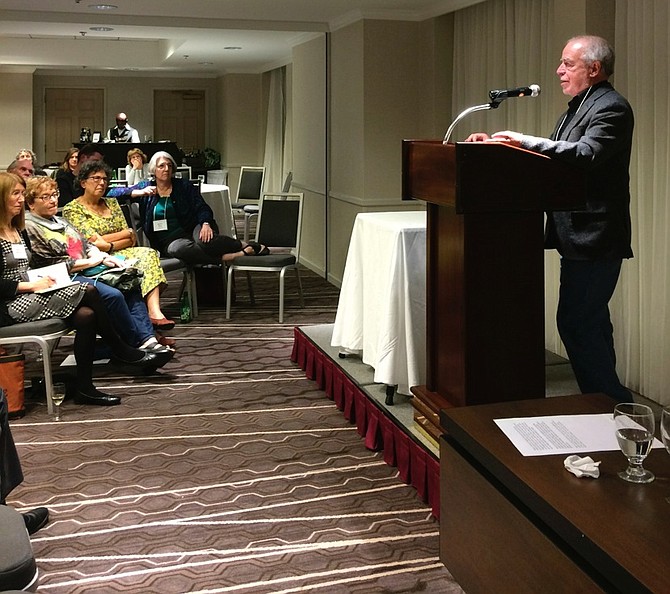 Richard Russo spoke about writing, painting, voice, and the world he grew up in to a crowd of about 100 people in Pentagon City. Photo by Eden Brown.

“I employ humor most when I am dead serious or have something really important to say.” — RIchard Russo

Novelist Richard Russo proved he is “Nobody’s Fool” on Saturday night when he addressed a crowd of about 100 writers, psychoanalysts, and fans who came to hear a writer who revels in exploring the writer’s psyche.

He didn’t grow up expecting to be a big success. His father had made him aware that having a vowel on the end of his name was not an advantage. Russo, whose grandfather immigrated from Italy to make gloves in Gloversville, N.Y., detested the town as he struggled to escape it, and loved it so much it has been the centerpiece for much of his fiction. Russo’s novels, “Everybody’s Fool”, “Nobody’s Fool”, and “Mohawk” all take place in a small town in New York.

Russo talked about the connection between painting and writing. He recently collaborated with Linden Frederick, a painter who lives not far from Russo on the coast of Maine. Friends kept telling him he should meet Frederick, who, they said, “paints the way you write.” He did, and felt an immediate connection, not least because they had grown up in towns only about five miles away from each other. A lot of the people buying Frederick’s work were novelists and screenwriters. He wondered what would happen if the writer-illustrator relationship were reversed: the painting first, then the writing. Frederick asked Russo if he would be willing to try it; he said he would “pay” by providing a smaller “draft” version of the painting. They put together a group of writers (Anthony Doerr, Elizabeth Stout among others) and the result was “Night Stories.” Fifteen American fiction writers each agreed to select one painting especially created by Frederick as inspiration and then, over the following months, write a story inspired by it. The show has just concluded a three-month run at the Maine Center for Contemporary Art.

Saturday night’s talk in Arlington was sponsored by New Directions in Writing, a three-year postgraduate training program, and Politics and Prose, the D.C. bookstore. Given that the crowd was largely psychoanalysts, academicians, and writers, Russo got a few questions about the wellspring of creativity and whether one is programmed to create: whether carving duck decoys, writing novels, or painting.

Russo said he’d try painting, if he suddenly had another life to live. His daughter is a painter, and he has discussed the parallels between their two forms of art with her. He believes no matter what a painter paints, it is a self portrait, just as what a novelist writes, is about him or her. Famous painters, like Russo’s favorite, David Hockney, are often quoted in that regard: “I’m just painting myself.”

Russo’s self-deprecating humor made the story of his struggle to leave Gloversville, and to move beyond being a university professor to become a writer entertaining. “But,” he said, “I employ humor most when I am dead serious or have something really important to say.” As he recounted his trajectory, his relationship with his creative writing instructor at the University of Arizona, and another student in the class who badly wanted to be a novelist, but ended up becoming a professor, he employed deadly serious truths about writing fiction. One of these was that a good novel is not about plot, but about conflict, and it cannot be the writer’s conflict, but the conflict of the character of the story.

Russo said he had been having trouble finding his voice as a writer and had tried to imitate many, back in those days of creative writing workshops. He was still struggling with the idea of writing full time, teaching a literature course. Because he wanted time to write at night, he taught books he had already taught, like John Steinbeck’s “Cannery Row.” As he was rereading a section one night in anticipation of teaching it, again, he read a part about Dora’s whorehouse, or “sportsmans club.” He was fascinated. He hadn’t noticed the voice he heard was one he recognized; it was his father’s voice. Russo told the audience a voice isn’t static: a writer can take on many voices.

Prompted by a question from the audience about authenticity of voice, Russo responded that he too had asked himself: “Was that authenticity of voice (in “Cannery Row”) that I heard really there or did I just hear it?” Continuing along this theme, Russo noted that one of his favorite writers, Ross Macdonald, who wrote hard-boiled detective stories of considerable literary value, was — oddly enough — close friends with Eudora Welty, and while Welty’s voice when writing to Macdonald was consistently very much like her voice in her fiction, Macdonald’s letters back to her were not the same as his fiction voice at all. There was not an element of “Lew Archer” voice in any of them. Macdonald, of course, was not his real name, Russo added, but a pseudonym: he had created a persona who wrote detective novels, and named him Ross Macdonald, and he invented a voice to go with that writer. It wasn’t any less authentic.

Russo told the audience of writers who were mostly middle-aged that while they have a disadvantage in starting to write later in life after having had a full career, they have many advantages. Writers have to know themselves before they can write. As long as a writer can answer the question, “What do I love and why?” as well as “Who and what do I fear, and why?” then the writer’s voice cannot be far behind.