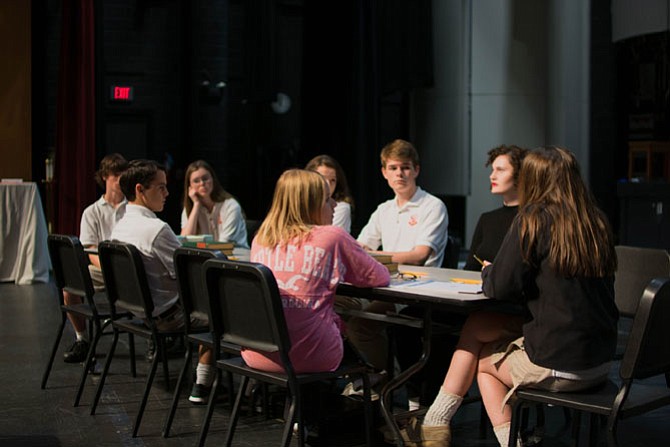 Bishop Ireton High School, a Catholic school with about 800 students in grades 9-12 on Cambridge Road in Alexandria, is staging "Twelve Angry Jurors" for three days only on Nov. 16, 17, and 18, at 7:30 p.m. Based on the movie, "Twelve Angry Men," this show features 13 students in the play, in both male and female roles.

"It's the same as 'Twelve Angry Men.' We just changed the gender," said Joanna Henry of Arlington, the new director of Theatre Arts at BI, adding that all 12 jurors and the guard are on stage the entire time. "It's a non-stop, constant discussion and not broken down into scenes," she said.

Henry said the action takes place when the jury starts to deliberate. "Eleven think he's guilty and one doesn't know. So he votes 'not guilty' because he feels they should talk about it and not sentence a man as guilty. Little by little other jurors start changing their minds," she said.

The Bishop Ireton theater program has about 50-75 students who do everything from the acting to stage crew to the Drama Club. Henry said they use the students to design shows and costumes, build the sets, and do all of the technical elements — stage manage, lighting design, sound design, and gather props.

Henry directed at Bishop Ireton in the early 2000s and took a break for about 12 years but continued to teach classes. With her new head position, Bishop Ireton put all of the theater programs under one roof and Henry said she couldn't be happier. "It's exciting to be back and directing and working with the students that way. I'm really enjoying it," she said.

She added, "I'm still teaching theater (four levels), and directing, producing and overseeing all the other programs within the school — the stagecraft class and costumes class. We also have a Drama Club, which I'm overseeing, but we have other teachers running it. We are also involved with the Cappies program. I'm also in charge of the International Thespian Society, which is an honor theater society. I'm pretty much doing theater all day; it's full time."

Under her watch, some Bishop Ireton graduates from the 2004 time period have gone on to become stars in the New York theater world. "At one point we had four involved with Broadway shows. They've been very successful in New York," she said.

Former student Jake Odmark played Harry in "Kinky Boots;" Karla Garcia was a "swing" who substituted for other actors in "Hamilton;" Matt Aument music-directed in "Sweeney Todd" and co-conducted the revival of "Gigi;" and Kerry Stinson started her own theater company called Blowout Theatre Company.

"I'm very proud of them. I know they've worked hard. They're all phenomenally talented. You can't describe how it feels to sit in an audience and see one of your students perform on Broadway. I'm so proud of what they've done," she said.

WHILE SHE WAS AWAY for 12 years, she still taught English and theater classes, occasionally helping with the productions, even though she wasn't actually directing and producing. Now that she's back in the director's seat, she said, "It's just been wonderful to work with the students, the enthusiasm and the passion, and the excitement makes me feel so much younger than I really am."

Over the years, Henry has worked on roughly 90 productions and directed close to 50 more. Besides working at Bishop Ireton, she's directed at the Little Theatre of Alexandria (LTA), The Arlington Players, Reston Community Players, Vienna Theatre Company, and Port City Playhouse in Alexandria.

At LTA alone, she directed many productions including "The Complete Works of Shakespeare (Abridged)," "33 Variations," "Rabbit Hole," and the musicals, "Company," Gypsy," "Into the Woods," and "The Music Man."

"LTA is set up very much like a professional theater," she said. "They have tremendous support in place for the director. They have terrific producers, stage managers, music directors, crew, choreographers. They're all there and they're all very talented."

Rachel Alberts, who serves as LTA's governor of public relations, said, "Joanna Henry is a theater student's dream. She is open and interactive with her teaching style. Many theater teachers have a big and blustery, larger-than-life approach. Joanna’s approach is very different — she listens, she’s patient, with her gentle but decisive manner she waits for a student to find their own voice on stage."

She continued, "Joanna is confident enough in her own abilities that she doesn’t feel the need to impose her own opinions on her students. She knows that there are many, many ways to accomplish a variety of goals on stage and behind it. She allows students to find their way, not her way."

Added Joan Lada, "Joanna is the kind of teacher I would wish for every child. She has a passion for teaching — whether in her classroom or in the rehearsal room. She enriches and expands her students’ lives ... From the moment I met her I was struck by her passion for theatre, her creativity, her ability to listen to everyone involved, her willingness to empower other people to create, and above all, her kindness and her patience." They met in 2006 when Lada stage-managed LTA's "Into the Woods," which Henry was directing.

Henry is also on several boards of local theater companies: she's on the Board of Governors at LTA; artistic director for the Vienna Theatre Company; and currently on the board of directors for the Virginia Theatre Association.

All in all, Henry's been working in theater for close to 40 years — doing everything from acting, to props, to painting sets, to publicity, to stage managing, and even doing radio spots. Originally from Roseto, Pa., she graduated from East Stroudsburg University in the Poconos with an English major and drama minor. She earned a master's degree as a reading specialist from GMU.

Bishop Ireton High School is staging "Twelve Angry Jurors" for three days only on Nov. 16, 17, and 18, at 7:30 p.m. The venue is the school auditorium at 201 Cambridge Road, Alexandria. Visit www.BishopIreton.org.