‘Make Some Choices’ in Alexandria
Votes

‘Make Some Choices’ in Alexandria 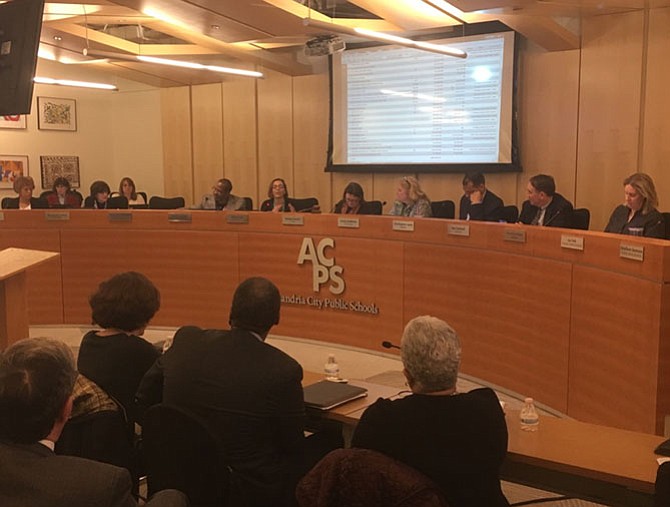 Repeating its earlier recommendations to City Council, a budget advisory task force urged the School Board last Thursday, Nov. 9, to weigh its capital needs in the context of the whole city.

“What I want to do is to step back and really have you all understand the larger framework we are trying to deliver,” said Task Force member Amy Liu. “We happen to have applied it to this set of projects with this [FY19-27] plan. But there’s a larger message we want to say, which is: when you have lots of things that seem important but you have fixed funds, you have to make some choices.”

“There is a single source of funding for city and schools,” said Task Force member Elliot Branch. “Given a single accountability to taxpayers, we suggest that that means a joint process of capital planning between the city and schools and a single capital improvement budget.” The Task Force’s written report also emphasizes taking “a strategic city-wide approach (city and ACPS)” and optimizing the capabilities delivered to citizens through one integral capital “portfolio.”

The School Board members have expressed varying perspectives about their autonomous mandate vis-a-vis finite city dollars. At an earlier meeting, Task Force member Marshall Cook said of their posture toward budgeting: “Lots of [School Board] members say, ‘What do we know the council will give us?’ … And other members say, ‘No, our job is to get as much as we can for the kids of Alexandria.’” Clarifying the latter, he added: “I’m not talking about frivolous,” but rather genuine needs.

Some statements from the FY18 budget process may illustrate their challenge.

School Board member Veronica Nolan said in March: “At some point we’re going to have to think about what we’re going to be given … Do we feel that City Council completely understands the tiered [i.e., prioritized] asks: ‘This is DEFCON 10;’ ‘This is nice to have’ …? It all feels DEFCON 10. … We have so many competing priorities right now throughout the city, we have to be realistic and thoughtful about that ....”

School Board member Karen Graf said in March: “The citizens look at us and they don’t see two bodies.”

At Thursday’s meeting, though continuing to differentiate between “their stuff” and “ours,” she recognized an opportunity for “synergy.” She also said: “I think you’re right, that we can’t do everything with a finite budget. … I do appreciate that every one of these things is going to wound someone, that you take off the menu.”

School Board member Ronnie Campbell said in March that the schools had already stripped their FY18 request such that no “fat” or “padding” remained for additional trimming. She reiterated in April: “We have needs, and that’s what we present. We don’t always get fully funded. Sometimes we have to go back to the drawing board and we have to make some cuts, we have to make some decisions. But it’s our responsibility to present to them what we honestly feel we need. And I think we’ve done that with this budget.”

Advocates for full school system funding drew a similar line in the sand. When advocates turned out in force at the March 13 city budget public hearing, one said: “We understand what we are asking for and we understand the cost.”

“We strongly believe that the needs being addressed by each project are valid and offer value,” the Task Force said in a written report. “However, we do not recognize every proposed project as the optimal solution for the specified need.”

Outlining in part how the Task Force formulated its recommendations and how the School Board and council might approach future decision-making, Liu said: “We put a lot of emphasis on two things. Urgency: life saving, risk for people or students, that if we don’t do the project it will really be harmful. The other was readiness: … Was the project fully thought out? Have we had sufficient public participation? … We were not convinced that … some of these projects … were ‘ready.’”

School Board member Bill Campbell defended the proposal to build a new pre-K center. Branch acknowledged the need, but said the city and schools need to have “a more fulsome conversation” before pushing forward.

Acknowledging the need for additional high school capacity, the Task Force bumped significant funding for that project only one year. But they recommended a fuller public process before execution in order to determine what number and type of high schools would best serve the citizenry.

The Task Force discussed the importance of laying aside ample funds for land acquisition. Task Force member Dwight Dunton said: “You guys, whether you know it or not, are real estate investors. You’ve got to be prepared for opportunity when it knocks.” As an example, he applauded the school system’s acquisition of an office building for conversion into a new school. He and School Board member Christopher Lewis discussed how the potential consolidation of the city and schools’ transportation facilities might create a land acquisition opportunity for a new school.

“We strongly recommend that there be a joint facilities planning process with the city. … Working together on this, we think, will be the solution so you don’t have to have a Task Force ever again,” said Task Force chair Lynn Hampton.

“We don’t sit here to presume to answer political questions because, frankly, no one elected us to anything,” said Branch “However, we do believe that when you answer political questions, it ought to be on an informed basis … So what we are trying to do … is to produce a process that will leave you well informed so, when held accountable by the taxpayers, you can answer those questions. And that really is it, at the bottom line.”

The superintendent will propose the schools’ FY19-28 CIP Nov. 30, preceding School Board CIP work sessions in December and final adoption Jan. 11. The Task Force will meet Nov. 16, 30 and Dec. 14, before issuing a final report in December or January. All meetings are open to the public.