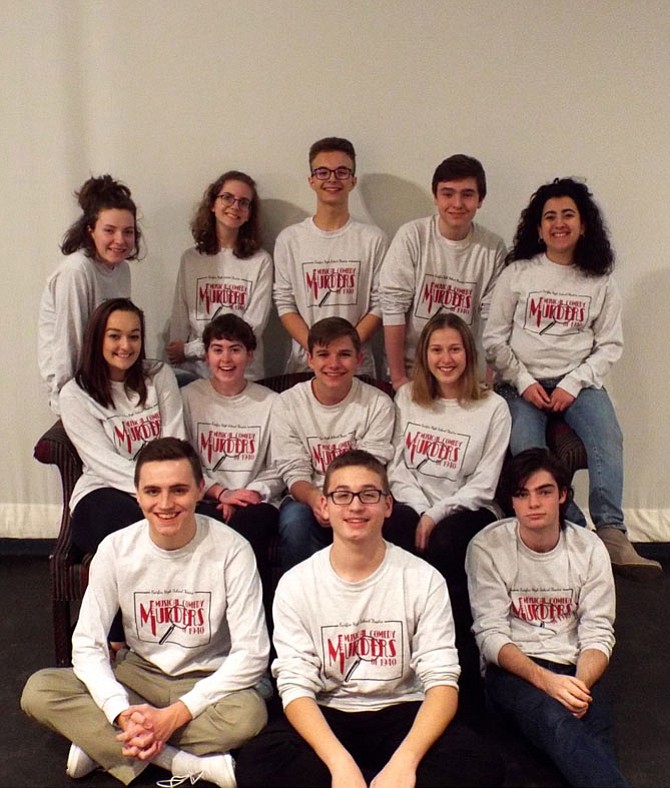 Fairfax — Featuring a cast and crew of 25, Fairfax High presents “The Musical Comedy

Murders of 1940.” It’s a murder mystery that follows the creative team producing a musical in a mansion’s library in 1940s New England.

The mansion is owned by a rich, theater-backer named Elsa, who wants to invest her money in a brand-new show. “Unfortunately, the creative team is made up of the same people who produced ‘Manhattan Holiday,’ during which the ‘Stage Door Slasher’ killed three chorus girls,” explained director Erich DiCenzo. “And now, it seems as if he’s returned.”

“I’ve wanted to do a murder mystery since I started here at Fairfax, five years ago, because my favorite movie is ‘Clue,’” said DiCenzo. “And this one really spoke to me because of the fast-paced humor and over-stylized physicality.”

He said one of the things he’s been most impressed by is the actors’ commitment to their characters. “It’s challenging because of the heightened style of the 1940s timeframe,” said DiCenzo. “But they’re executing both comedic and dramatic moments brilliantly.”

The scenes take place in the mansion’s interior, which includes hidden passages and trap doors. The crew also custom-built seven bookcases that turn, spin and slide to either hide or reveal truths about the illusive slasher. And the costumers worked hard on mastering authenticity, as well as matching the color and pattern of each character’s costume to his or her personality.

“I love shows where the audience knows more than the actors,” said DiCenzo. “And in this production, they won’t just be watching it, but will get to ‘play detective,’ too, trying to figure out ‘who dunnit.’”

Senior Thomas Iodice designed the set. “We wanted to make it look less like a set and more like the audience walked into someone’s house,” he said. “So we’re furnishing it with period pieces, from the tables and pictures to the smaller details. And our bookcases in the library don’t have a single book. Instead, we had a cereal-box drive and collected about 400 boxes. Then we painted them different colors, with the names of books painted on the edges, or ‘spines.’”

In the story, people are auditioning for the musical in Elsa’s house, but they’re also trapped because there’s a blizzard outside. “I wanted to pay attention to detail to make things as realistic as possible,” said Iodice. “So whenever the actors go outside and return, they’ll have snow on their shoes and will have to brush it off their coats, too. We also bought glass doors and will have snow visibly falling behind them. Everyone’s pitching in to help bring the set to life, and we hope the audience will get lost in the world we’re creating.”

Playing Elsa is senior Bridget Baucum. “She’s eccentric and extremely flirty with almost any gentleman who comes into her life,” said Baucum. “She’s also the typical, ‘True Detective’ girl who likes to go on wild-goose chases and investigations to find a killer. So she calls a detective to come to her house and help her set up an elaborate ruse of an audition to hopefully catch that person. She loves being a hostess and pleasing people.”

Baucum said this is one of her favorite roles. “I’ve always loved murder mysteries and wanted to act in one,” she said. “Playing this older woman who acts much younger is perfect for me. And I love to take on her air and style because it brings out the 1940s. I wear my great-grandmother’s real fur coat and a vintage dress that’s simple, but elegant.”

She said the audience will love “the explosion that is the characters. They’re all funny because, at its core, this is a comedy. They’ll also like the comedic timing which will enable them to laugh even more. And I think they’ll be absolutely blown away by the set.”

Senior Parker Stephens portrays Eddie McCuen. “He’s a struggling comedian called to this house for an audition,” said McCuen. He’s been out of work for a while, and this is for a Broadway production from his favorite writing team. He’s excited, even when he realizes there’s a killer on the loose. He wants to work with one of the most famous directors in Hollywood. And he goes from being an anxious wreck to someone who’s brave and has really come into his own.”

Stephens says he really relates to this character. “He’s kind of a mess, but has a heart of gold and is pretty likable,” he said. “He’s got some long and complicated lines that add a big, comedic punch to this dramatic situation. And he has some fun, physical scenes.”

Calling this play fast and funny, Stephens said the audience will love the jokes. “Even though it’s set in the 1940s, the punchlines are still relatable today. And our set has a bunch of twists and tricks. The action is nonstop, and it’s just a fun show to see.”

Playing Kelly, the police officer with whom Elsa is working, is sophomore Sebastian Newlin. “He’s strict and stern, confident, a by-the-book leader, all business and a hard-headed professional,” said Newlin. “He takes charge when everybody starts to freak out after his and Elsa’s plan has failed.”

He’s enjoying his role because “I get to act opposite of me. I’m very friendly, humorous and outgoing, and a rule-breaker. And I like taking charge and yelling at people. I’m also the youngest cast member, so it feels cool to boss around all these seniors and juniors.”

Newlin said the audience will appreciate how hard the students have worked to put forth their best efforts in building the set and portraying these characters. “It’s more than just a high-school play,” he said. “It almost feels like a movie, like ‘Clue,’ where everybody’s a suspect – and they’ll feel like they’re part of the action.”