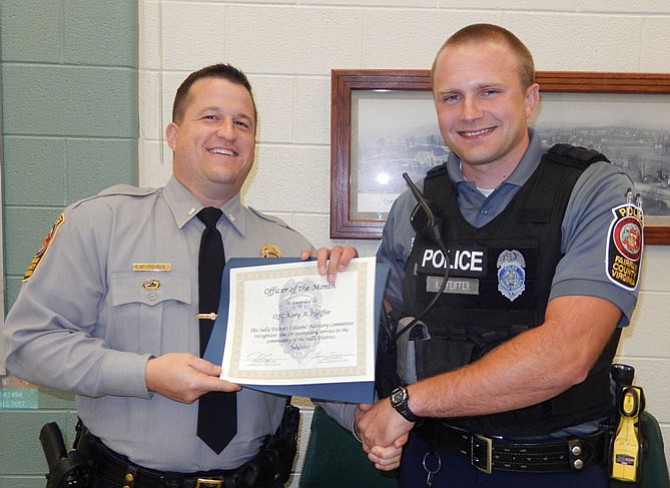 Lt. Ryan Morgan (left) presents the Officer of the Month award to PFC Kory A. Pfeiffer. Photo by Bonnie Hobbs.

PFC Kory A. Pfeiffer was chosen the Sully District Police Station’s Officer of the Month for July. He was honored at the Sept. 13 meeting of the station’s Citizens Advisory Committee. The committee doesn’t meet during the summer.

In her nomination letter, Lt. Deanna Weand said Pfeiffer has been an excellent patrol officer since his arrival at the station. In July, he was instrumental in several events that led to both arrests and rendering lifesaving aid.

“On July 17, 2017, Officer Pfeiffer utilized information updates from a shooting event that led to him finding the suspect vehicle fleeing the scene,” wrote Weand. “Upon stopping the vehicle and the suspects bailing out of it, Officer Pfeiffer assisted perimeter units by giving updates over the radio, which helped effect an arrest.”

Then three days later, on July 20, Pfeiffer responded to a stabbing in Chantilly. Once on scene, he found the victim who had sustained four, potentially life-threatening stab wounds. Pfeiffer rendered aid until medics could arrive. The victim was transported and ultimately survived his wounds.

“Pfeiffer excels at criminal patrol and, during July, he also made two traffic stops that led to two arrests and a seizure of a quarter pound of marijuana,” added Weand. “It is a pleasure having Officer Kory Pfeiffer serving in the Sully District and he is well-deserving of the recognition as Officer of the Month.”