Sharing their wit and wisdom. 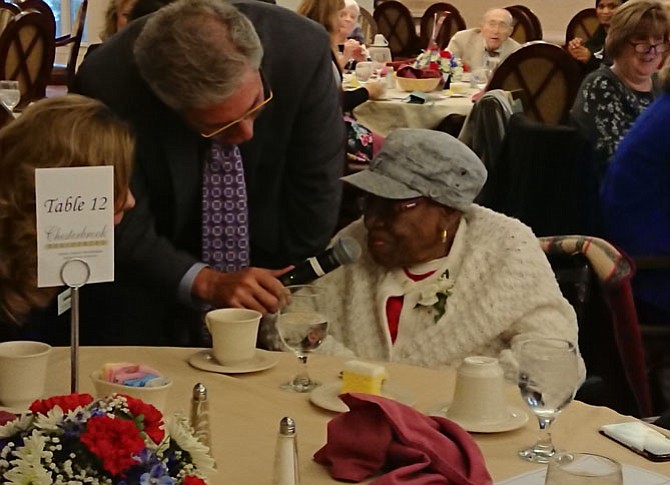 At 107, Laura Mallory, right, remembers the end of World War I. Photo by Jeanne Theismann.

“Our centenarians are sage wise and this is an opportunity to bring everyone together to celebrate life.” — Celebrating Centenarians organizer Kate Caldwell 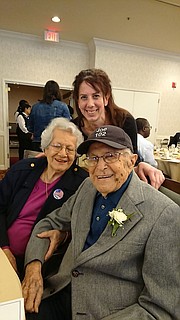 Just days shy of his 103rd birthday, World War II veteran Joseph Lucchi, right, enjoys the Celebrating Centenarians luncheon Nov. 7 at The Fairfax at Fort Belvoir. With him are his wife Rosa and granddaughter Amy Joseph. 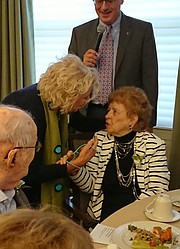 Want to know the secret to a long life? If 107-year-old Laura Mallory is to be believed, it is not having a husband and children to worry about.

“I never married or had kids,” said Mallory with a laugh when asked the secret to her longevity.

Mallory’s comment was just one of the many bits of wit and wisdom shared as 25 centenarians from across Northern Virginia gathered for the second Celebrating Centenarians reception Nov. 7 at The Fairfax at Fort Belvoir.

“I call this ‘saging not aging,’” said Kate Caldwell of Elder Tree Care Management Services and organizer of the event. “Our centenarians are sage wise and this is an opportunity to bring everyone together to celebrate life.”

Mallory was one of two 107-year-olds in attendance. At 100, Rubinette Dunaway was the youngest.

“I just turned 100,” said Dunaway. “I never imagined there would be so many people here older than me.”

World War II Army Colonel Joseph Lucchi, just a few days shy of his 103rd birthday on Nov. 17, attended the luncheon with his wife Rosa, who he married 48 years ago following the death of his first wife.

“She is only 90 years old so I guess I was robbing the cradle,” joked Lucchi. “She is also a great cook but unfortunately when I retired, she informed me that she was retiring too — from the kitchen.”

When 102-year-old Vera Punke was complimented on her youthful skin, she quipped, “If you think I look good now, you should have seen me last year.”

Interspersed with the laughter were more serious observations on life as a centenarian.

“I think it’s important to maintain a sense of curiosity no matter how old you are,” said 103-year-old Doris Kessler.

For Lucchi, having a fulfilling life as a centenarian is about the attitude he developed growing up as the son of poor Italian immigrants.

“The secret in life is to work hard and treat others with respect,” said Lucchi, who attended law school at night and retired as the Chief Clerk of the Appellate Court in New York. “If you are good to people you often find later in life that they are good to you.”

When Mallory wasn’t joking about the benefits of being single, she simply said, “There is no secret. God has been so good to me in allowing me to live so long.”