New Kid on the Block in Alexandria
Votes

New Kid on the Block in Alexandria 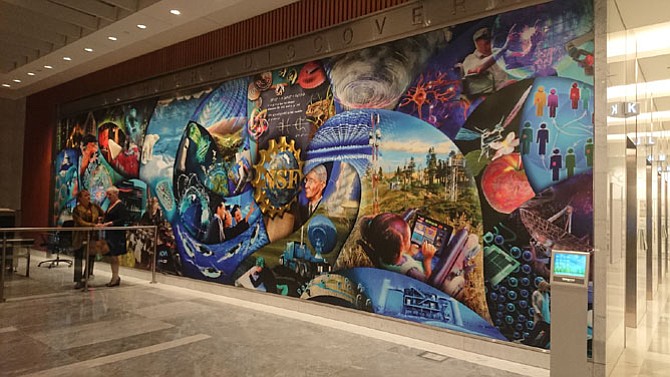 The 52-foot wide and 11-foot tall History Mural is the focal point of the new National Science Foundation Headquarters building in Alexandria. It provides a visual history of the NSF and depicts seven decades of scientific discovery and innovation. Photo by Jeanne Theismann.

“This project is a catalyst and kickstarter for future development projects in the city.” — AEDP President and CEO Stephanie Landrum

The National Science Foundation joined with the Alexandria Economic Development Partnership and the Alexandria Chamber of Commerce to host an opening reception Nov. 8 at the new NSF Headquarters building on Eisenhower Avenue.

“We are excited to welcome the National Science Foundation to Alexandria,” said AEDP President and CEO Stephanie Landrum. “This project is a catalyst and kickstarter for future development projects in the city.”

The reception featured displays of scientific innovations throughout history, many of which are depicted in the History Mural, a 52-foot wide, 11-foot tall mural that is the focal point of the building’s lobby.

“This was a thrilling project to be a part of,” said Nicoll Fuller, the mural’s artist.

The NSF headquarters is located at 2415 Eisenhower Ave. For more information, visit www.nsf.gov.