Baking ‘To Improve the Lives of Others’
Votes

Baking ‘To Improve the Lives of Others’

Bullis School students continue tradition of baking pies for those in need. 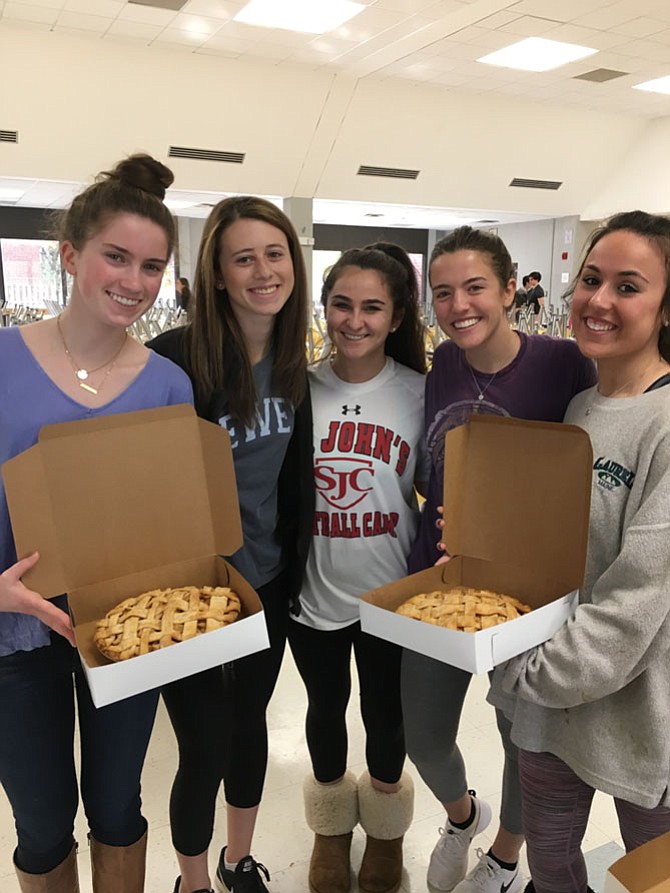 By By Peggy McEwan

Potomac — For hours the Saturday morning before Thanksgiving, the smell of apple pies

“This is part of a Humanities Capstone project on homelessness in the U.S. for me.”

baking filled the cafeteria of Bullis School. It was the annual Apple Pie Bake at the school when students peeled and cored fresh apples, mixed them with sugar and spice while others rolled pastry and cut fancy lattice tops to weave over the filling before each creation went into the oven for baking.

Finnegan said 122 pies, along with baskets of food and a gift card for a turkey,

went to Montgomery County Housing Opportunities Commission to be given to families in need.

The remainder of the pies were picked up by Abel Habte, a driver from Martha’s Table in Washington, D.C.

“I will take them right down to the Harvest Dinner,” Habte said. “They will be served with the dinner.”

The pie baking was mostly a student-driven activity, said Dede Schumacher, PTA member and mother of three Bullis students. “We make sure all the supplies are here like the apples and the [pie] boxes,” she said.

“This is part of a Humanities Capstone project on homelessness in the U.S. for me,” Sophie said.

Bullis students have been baking Thanksgiving pies for 22 years. They use the same recipe each year, one developed by now retired teacher Marty Berger.

The lattice tops seem to be a point of pride for the students.

“I made some really beautiful pies,” senior Katie Morris said.

So are the boxes the pies are delivered in.

Rows of pie boxes lined cafeteria tables, all decorated by students with individual Thanksgiving themes. There were boxes with pictures of turkeys, pumpkins, hearts and many with the simple message, “Happy Thanksgiving,”

“I did it last year because I thought it would be fun and it’s for a good cause,” sixth grader Samantha Pepper said. “My job was to mix the filling.”

And there was no tasting, she said.

As the morning passed and all the pies were cooling or baking, the Simpsons worked together to clean one of the kitchen work tables.

They would repeat the assignment at home before Thanksgiving, making both apple and pumpkin pies, but not on such a large scale, Laura Simpson said.

Senior Brett Guterman said he has helped with the baking for two or three years.

“I like to improve the lives of others,” he said. “These two hours might be meaningless to me but to others it can make a difference.”

His friend David Kavteladze, also a senior, said he thinks the activity is a great one for Bullis students.

Not everyone comes to the pie bake, Brett said, but everyone donates to the baskets. Everyone.

That includes all levels of the school from lower school up, Finnegan said. Each class brings in canned goods, stuffing mixes, boxes of macaroni and cheese, crackers and condiments during the week before Thanksgiving, she said.

PTA members created the 122 baskets, adding fall decorations for the tables, even a large aluminum baking pan for the turkey. They then wrapped the baskets in clear cellophane and topped it with a big orange bow.

“Every month we have community service and students prepare a meal for homeless men at the [county] shelter,” Finnegan said. ” My point is there is a real commitment to serve the homeless in Montgomery County.”

“One hundred and twenty-two baskets shows what a heart we have,” she added.