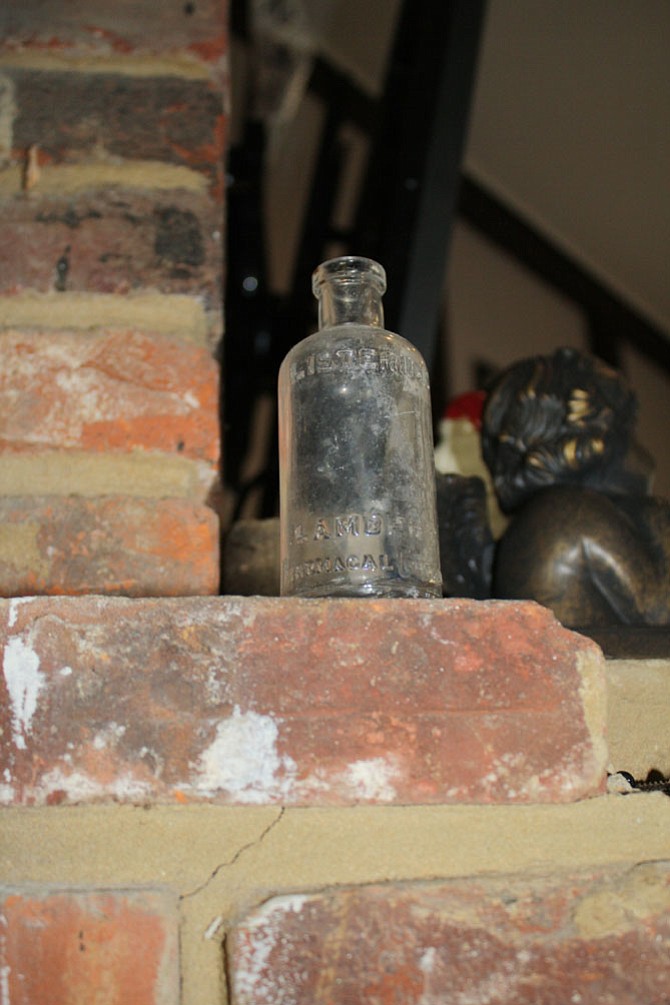 A Listerine bottle dug up in the Beckwith House yard. Photo by Mike Salmon.

By By Mike Salmon

Clifton — When Mona Harrington’s sister was over at her Clifton house that dates back to 1771, the door to a

cabinet in the second floor room kept mysteriously opening, so her sister got out her cellphone and videoed the whole thing. They both attribute it to the ghost that lives in the house. “You can see the doors opening on the video,” said Harrington.

Visitors on the upcoming Historic Clifton Holiday Homes Tour will look for the ghost as they tour Harrington’s home, known as the William E. Beckwith House, along with several others that are decorated with period items, one with another ghost, and one with a miniature village that occupies several rooms.

In addition to the Beckwith House, the tour will stop at the Baber Home, circa 1880; the Stein/Davis home, built in 1911; the Clifton Baptist Church, 1875; the Clifton Presbyterian Church, 1870; the Primitive Baptist Church from 1871; and the Wyant Home and the Layfield Homes that were built after 2000. The town holds the homes tour every year, but changes the homes each year.

Melissa Milne is a tour coordinator along with co-chair Darah Curran. The ghost stories don’t surprise 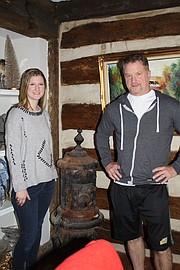 Mark Harrington and his daughter Ana beside a wood stove that dates back to the Civil War Days.

anyone. “Almost every old house in town has a ghost story, these houses are really old, who knows,” said Milne. That’s the story with the Beckwith House ghost. “It migrates from upstairs to downstairs, it’s peaceful,” she said.

CLIFTON BEGAN as a small village situated at a railroad depot on the Orange, Alexandria and Manassas Railroad in the 1860 timeframe, and in the advent of the Civil War, several locations were part of the war, including the Beckwith House where the Harringtons live. William Beckwith died in 1863 and left the home to his slaves, William Harris, his wife Harriet Harris, and their five children.

In March, 1869, the railroad station was constructed and was known as Devereux Station and then the Clifton Station, and the town acquired the red caboose that sits along side of the tracks in 1949. The houses exchanged hands through the years, and eventually the train ceased stopping in Clifton, except during their annual Clifton Day where the train acts as a mode of transportation from a stop in Springfield where there is more parking.

Milne lives in a newer house on a hill overlooking the town, but is still surrounded by the history of

the area. When doing some yard work years ago, she found some “very old bottles and the remains of a still from the prohibition days,” she said.

The Baber House, which dates back to 1880, and was a boarding home in the 1950s, that may have been the start of the ghost experiences. Owner Kathy Kalinowski has lived in the house since 1980, and knows the ghost story, but doesn’t have any personal experiences. “An old lady in the house who was taking care of a child who died,” she said. The house sits on several logs which is consistent with other home foundations from that era. “We’ve had folks come with their metal detectors and they found bullets,” said Kalinowski.

A newcomer to the tour is the Sawyer/Aspesi home, which is technically outside of the Clifton town

limits, but is part of the tour nonetheless. The bus will not stop at the home, but it’s on the map and tour-goers can stop on their own. The house was built in 1989 but has an extensive holiday village set up, with one part named the “North Pole,” while others are “Christmas in the City,” “New England Village,” and “Nicholas Nickleby.” The North Pole has 62 lighted buildings, a sledding hill and stream.

During this visit to the Beckwith House, a set of car keys vanished, only to turn up 15 minutes later in a high traffic spot that had been looked at minutes before. Everyone present attributed it to the ghost.