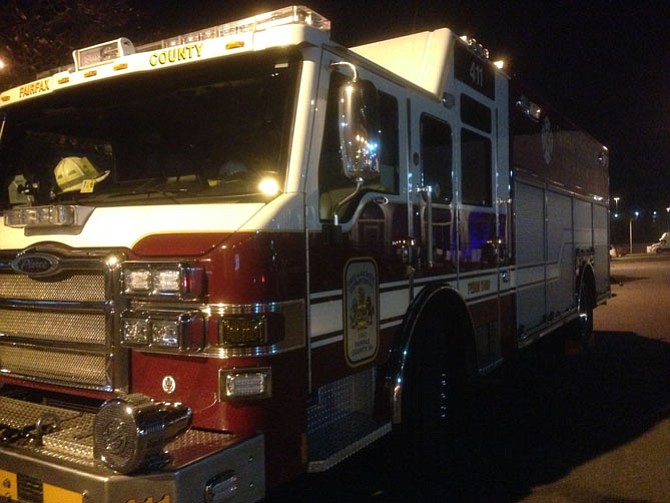 The fire trucks from Penn Daw and Mount Vernon were in the parking lot at the Springfield Hilton during the awards ceremony. Photo by Mike Salmon.

apartment complex in Kingstowne back in 2004, it was just one of the several points in his police career that added up to recognition by the Mount Vernon-Lee Chamber of Commerce on Friday, Nov. 18 at the Hilton in Springfield.

The apartment fire still stays with him. “The flames engulfed it pretty much, we helped carry a lot of people to the ambulance,” he said. 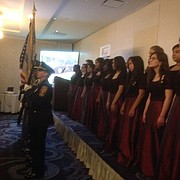 from the Mount Vernon Fire Department and emergency response officers from Fort Belvoir.

“We are delighted to welcome our elected officials, police, emergency medical personnel, firefighters and their families to this community celebration of dedication, valor and service,” said Scott Stroh, the chamber president.

On the stage were Supervisor Dan Storck (D-Mt. Vernon); Supervisor Jeff McKay (D-Lee); Lt. Col. James Matheson, Commander of Fort Belvoir; Col. Edwin C. Rossler, Fairfax County Police Chief; Chief Richard Bower of the Fairfax County Fire and Rescue; and other officials. The event was emceed by Jonathan Elias, an ABC network newsperson, who interjected a little humor over the course of the evening to relieve tension, he said. Elias grew up with parents in the military and police. “I’ve always had an affinity for police and fire, hats off to you,” he said.

The Fairfax County Public Safety Honor Guard kicked off the event with the colors, and the Viva Voces, the advanced Women’s Choir from Mount Vernon

This sentiment was felt on the stage too. “It’s a great feeling, it means even more when you’re recognized by your peers,” said Lama.

By the Mount Vernon-Lee Chamber of Commerce