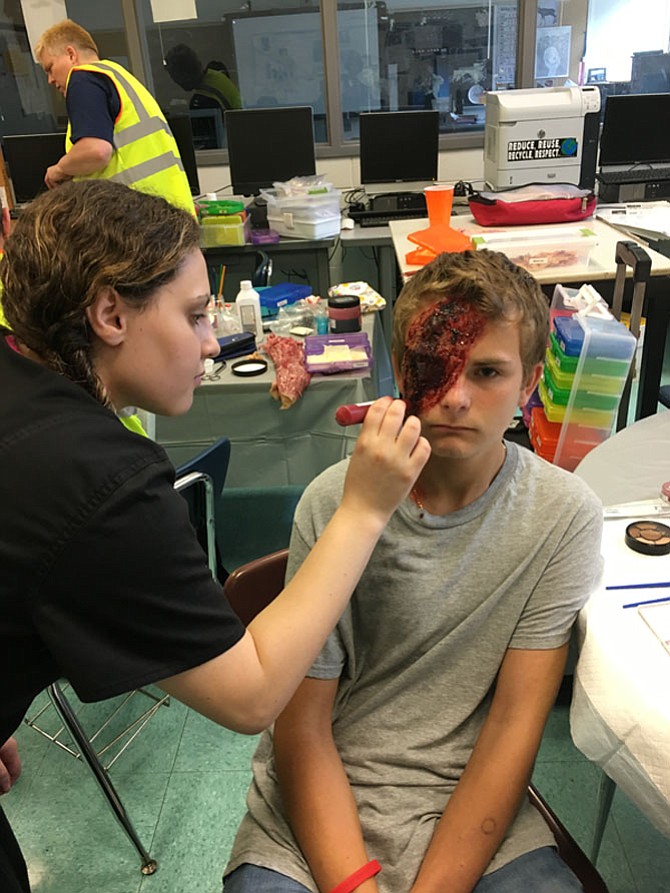 Gavin Nielsen of North Bethesda is made up by Joelle Miller to simulate a person suffering a gunshot wound in the eye for the mass casualty drill at Whitman High School on Sunday. Photo by Peggy McEwan 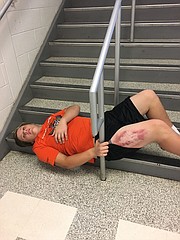 Declan Tilton of Gaithersburg waits for rescue by first responders during the mass casualty drill at Whitman High School on Sunday. 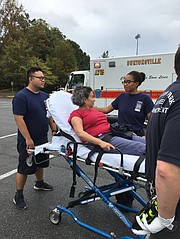 Volunteer victim Laurie Gross of Bethesda is comforted by first responders during a mass casualty drill at Whitman High School on Sunday.

It didn’t happen but it could: a shooting in a local school or office with multiple injuries. Several companies from Montgomery County Fire and Rescue increased their readiness for that potential at Walt Whitman High School on Sunday, Oct. 8.

“The scenario is multiple patients injured from a shooting,” said Evelyn Trong, member of the Glen Echo Fire Department who helped organize the training. “Given the context of what’s been happening in the country, we want to practice.”

Volunteer victims made up with realistic looking wounds were scattered about the second and third floors of the school as first responders, after learning the site was secure, flooded into the school to help in the mass casualty incident drill.

“Anytime you pull up to a scene you are going to get something different than before,” Glen Echo Fire Department Chief Herbert Leusch told members of the nine companies participating in the drill. “The goal is to save the most victims.”

Leusch reminded the first responders that they had the skills to get the work done. He also reminded them that good communication was essential and to remember their specific assignments. He then sent them into the school to deal with the results of the imagined shooting.

Meanwhile about 30 volunteers with different degrees of injury from apparently dead through critical to “walking wounded” were positioned throughout the school.

As the medics entered, the scene became more realistic, more chaotic. There were calls for help, victims sprawled on the floor crying, others hiding in bathrooms or behind overturned desks.

“I have a broken femur,” volunteer Declan Tilton, of Gaithersburg, said. “I fell down the steps trying to get away.”

Volunteer Laurie Gross, of Bethesda, was not injured but suffered a panic attack in the practice.

“I was upstairs where there were dead people,” she said.

The first responders went through the incident twice Sunday morning, reviewing the good and the not so good at the end of each.