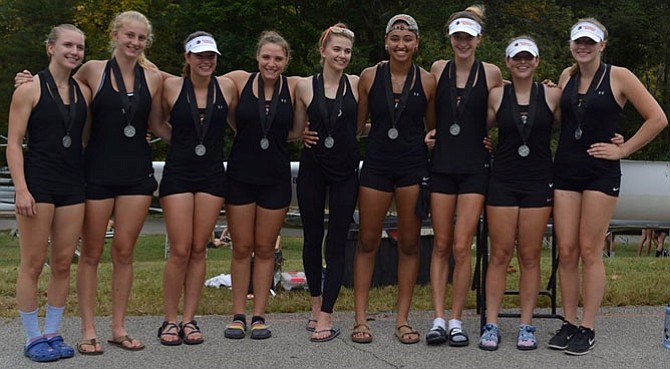 Fall crew regattas are head races, where boats launch in 10-15 second intervals and winners are determined by the crew that has the best time in their category on the 4500-5000 meter (three miles) course. The Occoquan Challenge this year added a 180-degree turn at the race half-way point, instead of more gradual turns along the race course. This change presented a stiff challenge to rowers and coxswains alike to maintain speed while turning an eight-seat, 60-foot boat.

On a day with August-like heat and humidity, the ODBC Women’s Varsity 8 battled a 10-boat field to post a winning time of 16:04.93, the fifth time over the past decade that the ODBC Women have won this event. The 1V8 includes rowers Blythe Markel, Marley Osborne, Grace Fluharty, Rachel Knapp, Grace Asch, Astrid Henkle, Grace Vannatta, and Celia Lane, and coxswain Paige St. John. They are led by veteran coach Jaime Rubini.

Among ODBC lower boats, the Men’s Junior Varsity 4+ led the way with a victorious time of 17:50.04. The JV4 is coached by Matthew Schilling and includes rowers Campbell Bright, Emmett Cocke, Mason Melear, and Raja Janjua, with coxswain Emmanuel Teferra. The Men’s JV8 boat placed third out of nine entries with a time of 16:13.74, and the Men’s Frosh 8 also finished third in a five-boat field at 17:21.61.

In one of the final races of the day, the five entries in the Women’s Frosh/Novice 8 category of newly minted rowers included two ODBC boats that finished first and third with times of 18:52.31 and 20:04.36. Rowers on the winning Frosh boat include Mackenzie Allen, Riley Bucholz, Kaitie Dennis, Anna Hill, Elle Krese, Halle Reinholtz, Caroline Suratt, Grace Yokitis, and the coxswain is Caroline Miles. They are guided by women’s head coach Patrick Marquardt.