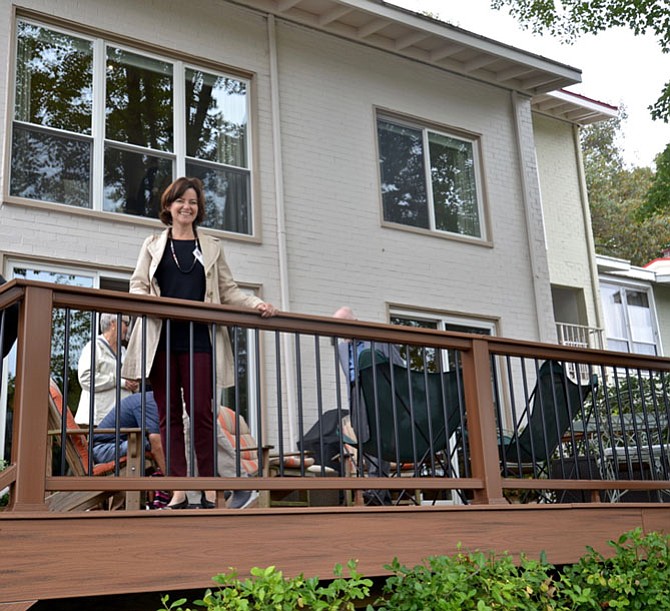 Reston Home Tour Chair Marnie Schaar takes a brief break on the deck at the Parnicky/Weber townhome on Orchard Lane. Quite a few of the tour attendees thought that was a good idea and sat for awhile, enjoying the view across Lake Anne. Photo by Andrea Worker. 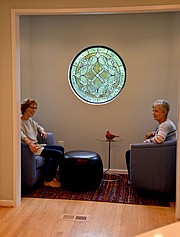 From left: Reston Home Tour-goers Cindy Vance and Susan Gulick, both of Reston, trying out the off-kitchen nook at the Flitcroft house on Bromley Village Lane.

Mark Fies of Synergy Design and Construction shows Restonians Margaret Cotroneo and Norm Reich some of the plans from the re-build done after fire destroyed significant portions of the McGurns home on Hemingway Drive. Fies, and his wife Mina, the founder of Synergy, were on hand at the stop to highlight before and after photos of the kitchen remodel.

The gathering area at newly-opened Aperture apartments at Reston Station saw a steady stream of tour-goers checking out two units – and enjoying live music, snacks and some libations before heading on to their next stops.

“A New Perspective” was the theme of the 16th edition of the annual Reston Home Tour, presented by the Reston Historic Trust, and benefiting the organization’s continuing mission to “preserve the past, inform the present, and influence the future of Reston.” It was an apt descriptor for the six private residences, the new apartment options at Aperture at Reston Station, and even for the remodelled and re-purposed Lake House on Lake Newport that were on display for the self-guided tour.

For many of the homeowners who agreed to allow hundreds of curious visitors to wander through their abodes on Saturday, Oct. 14, their homes did, in fact, represent new perspectives for their own lives and lifestyles – and some fabulous views. For quite a few of them, their digs were their “next phase” living choice, like Leslie Siegmund and Jack Mathias, empty nesters who in 2015 made the move from Oakton colonial (their home for 20 years) to mid-century modern on South Shore Road, sitting right alongside Lake Anne.

Since their move-in, Siegmund and Mathias have been pretty much in constant renovation mode, starting with the kitchen, then a hall closet converted to a full bath, a remodelled master bath, and a backyard renovation that provides a series of terraces and patios that lead down to the lake. Plans are afoot to further expand the garden and hardscape, ultimately adding a dock to offer a floating shortcut to the amenities of Lake Anne’s offerings.

TWO MINUTES BY WATER, and maybe five by car, the home of Karen Parnicky and Stephen Weber on Orchard Lane stays true to the new perspective theme. Down-sizers from a single-family home in North Reston, the couple had originally planned to move into a condominium complex, but despite the need for significant modernizing renovation, the possibilities and the lake views kept calling them back to the townhouse designed by Chloethiel Woodward Smith, architect of many Washington D.C. projects, as well as Reston’s Waterview Cluster, and built in 1965.

The entire home has been transformed. Walls came down everywhere, turning the compact, rather maze-like accommodations into an open floor plan living space with light and views galore, but despite the impressive results that were achieved on the inside, the roomy deck overlooking Lake Anne was still where the “tourists” all seemed to congregate, including Reston Home Tour Chairperson Marnie Schaar, who said she would have cheerfully stayed on that deck for the rest of the day if her duties didn’t demand that she keep moving along the tour stops.

This is Schaar’s first time as the chair of the event, taking over from veteran Bonnie Haukness, who had been at the helm since 2007. Schaar came to Reston as a child in 1978. Adding her 15 years of real estate experience in the local market to her long-time residency made her a perfect choice to help highlight the joys of Reston living.

More water views and renovations brought the crowds to the Lake House on Lake Newport. Purchased in the spring of 2015 by Reston Association from Tetra Partners, the building, with it’s decks that hang out over the water, re-opened last year and is available for rental for corporate and special events. It also houses after-school sports and learning programs for local elementary and middle school students. For the tour, the Lake House was a perfect spot to re-group and sample some refreshments while enjoying the works of several local artists on display for the occasion, like Dana Scheurer, the artist who created the “Midtown Mural” that decorates a large section along New Dominion Parkway in Reston Town Center. Scheurer also designed the signature logo of the Reston Home Tour.

Judging from the the lakeside homes on the tour, there’s a lot to be said for putting down roots along one of Reston’s many waterways, but the tour organizers didn’t forget to offer stops among the leafy green spaces for which the area is most known.

Carolyn Flitcroft’s 1984 contemporary off North Village Road enjoys the peacefulness of its wooded surroundings, but still manages to feel bright and airy with well-placed windows. A cozy alcove off the kitchen invites a bit of downtime with a book or some digital recreation, or just a chat with a friend, like tour-goers Cindy Vance and Susan Gulick who took a moment to enjoy the welcoming spot.

The Zalles family decided that they needed to expand their perspectives, when they moved to a larger home on Spyglass Cove Lane to accommodate their family of four, the furry family members, and the extended family that they love to gather with. The property is a Certified Wildlife Habitat, overlooks the Walker Nature Center and has easy access to one of Reston’s woodland walking trails. To capture the natural wonders just outside their back doors, the Zalles added an independent heating source to a glassed-in three season room, making it an ideal study or just a comfortable place to sit, relax, and watch nature do her thing.

THE TREES in front and in the back of the transitional-style townhome on Hemingway Drive are what attracted Terry and June McGurn to the property, as well as the “London Square” look of the oval the property faces. The McGurns could tell you a thing or two about having perspective. Only three weeks after completing a kitchen and master bath renovation on the home they purchased in 2012, a fire that started on the deck destroyed the back of the house and did considerable damage to the rest of the dwelling.

“They handled the whole thing amazingly well,” said Mina Fies, founder of Reston-based Synergy Design and Construction. She and her partner, husband Mark Fies, were on hand to illustrate the befores and afters to the fire-damaged house that Synergy rebuilt for the McGurns.

While Reston may be most famous for its clusters and village-style homes, there’s no denying that apartment and condo living has added a much bigger footprint to the area in recent years, and the amount of development in progress promises even more high-density living options. To offer the tour-goers that different perspective on Reston living, Karen and Alan Reynolds shared their view of Reston Town Center from their 14th floor digs in the Stratford House Place complex.

The folks at just-opened Aperture apartments at Reston Station, directly across from the Metro complex, spotlighted the newest living option in the area. The spacious and modern common area, adjacent to the pool and outdoor amenities was the venue for refreshments, while two different floor plans were available for inspection.

As always, tour ticket prices benefitted the Reston Historic Trust, and the Wine Cabinet at Northpoint Village continued their tradition of offering wine tastings to tour attendees, and contributing 10 percent of any sales from the day to the Trust.