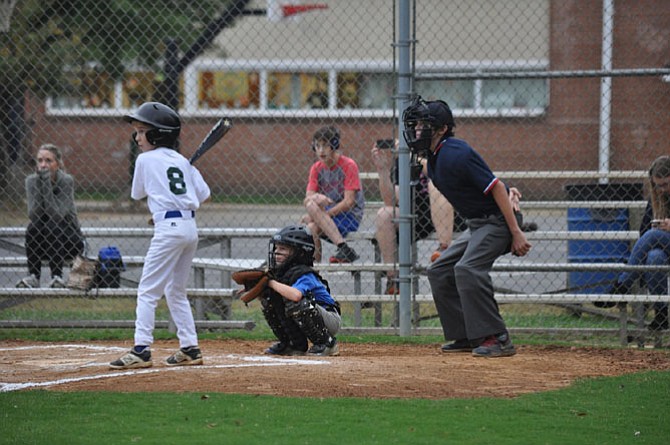 In the words of John Donaldson, administrator of Virginia Little League District 9 and long-time Ft. Hunt Little League (FHLL) umpire, “Umpires are as essential to the game of Little League baseball as well-maintained fields and dedicated coaches. Yet today, not enough parents of young players are signing up to become umpires, preferring to stay in the stands and watch their kids play.” This is understandable, but usually results in a shortage of adult umpires. Fortunately for FHLL, Youth – or Junior – Umpires have come to the rescue by taking on a large share of the umpiring workload.

FHLL accepts teenagers age 13 and older for training as Junior Umpires, but they are restricted to working the bases until age 16. Training typically includes 2-3 hours in the classroom reviewing the rules and another 1-3 hours in the field practicing positioning. In addition, some mentoring is provided by adult umpires, particularly during games. The result of this training is that experienced Junior Umpires are far more knowledgeable of the rules than most coaches and fans.

Two umpires at a minimum, one behind the plate and one covering the bases, are needed for a well-umpired game. A clear measure of the importance of Junior Umpires to FHLL is the share of umpiring slots they cover. This spring, for example, there were 214 games requiring umpires, and Junior Umpires filled just over half of the slots. This fall, Junior Umpires have covered nearly 70 percent of slots. A total of 25 Junior Umpires have worked in the spring and fall seasons, usually – but not exclusively – on the smaller fields used by younger players. These umpires are paid $25 for bases and $35 for plate for each game.

Most get into umpiring simply because they love baseball, but there are also other reasons. First-year umpire Sean Finn likes the different perspective on the game that umpiring offers, but adds that “it’s one of the only jobs I can do as a 13-year-old.”

Alex Depumpo, an experienced umpire with many games behind the plate, enjoys “being in control of the game.”

Riley Jay has umpired for six seasons, two behind the plate, for love of the game, but also because he can earn some money while giving back to the community.

Jay says that the hardest part of umpiring is “making split-second calls.” Depumpo is concerned most about “making close calls that can change the outcome of the game.” Finn echoes the thoughts of many adult umpires when he notes that the hardest part of umpiring is keeping track of baserunners while also being ready for the action that occurs when a batter hits the ball. As would be expected, these umpires like their roles least when people argue or question calls or assume they know the rules better than the umpires.

Jay says umpiring is fun because he can watch as young players enjoy and learn to play the game. Depumpo likes high-scoring games with a lot of action. Finn takes pleasure in making “safe” or “out” calls in the same manner as professional umpires.

The FHLL family is very appreciative of the contributions made by Junior Umpires. Coach Brian Kasprzyk, for example, says, “I respect the junior umpires in FHLL because they demonstrate a positive attitude toward the coaches and the players.”

Bob Mulvaney, a coach and director of Fields and Facilities at FHLL, adds “Junior Umpires are a huge asset to FHLL. They work really hard to be professional and bring excellence to their work. It’s impressive to see and essential to the long-term success of Fort Hunt Little League.”

Parents and coaches alike see that the participation of Junior Umpires is important to ensuring that there are umpires in the future. Steve Sarro, parent of a AAA player, particularly likes that the “Junior Umpires show the younger players what they can work towards.” He adds that the Junior Umpire program is a great way that youth can help with community service, make some money, and stay involved in baseball even if they no longer play the game.

Senior Umpires probably appreciate the Junior Umpires more than anyone because the Juniors lighten the load and bring fresh energy to the umpire corps. Mike May, who both umpires and handles umpire scheduling for FHLL, says he enjoys working games with Juniors and appreciates their commitment to doing the job right, adding “we couldn't do it without them.”

FHLL Junior Umpires have varying plans for the future, with newcomer Finn hoping to become a plate umpire, while the more-experienced Depumpo “would like to eventually umpire travel and all-star games.” Both plan to continue umpiring through high school and during summer break while at college.

Kasprzyk says, “The program provides Junior Umpires with an opportunity to learn about leadership and responsibility, while also growing their self-esteem and gaining experience in a fun atmosphere.”

Mulvaney adds: “Taking on the responsibility of umpiring games is a credit to these young people, and learning umpiring skills translates far beyond the field of play. The experiences they gain will help them navigate all kinds of situations and challenges later in life.”

For those interested in umpiring in FHLL, visit http://forthuntlittleleague.org/ for additional details.