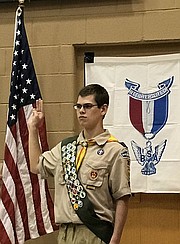 Troop 30 of Centreville honored Evan Simmons who received the rank of Eagle Scout in an Eagle Court of Honor ceremony on the evening of Monday, Oct. 9. Evan was recognized for his achievements in a ceremony held at the troop's chartering organization, Centreville Presbyterian Church (CPC).

Evan earned a total of 32 merit badges and for his Eagle Scout Project he led a team of 15-plus workers in a beautification project of CPC.

Evan has had a busy year as an elected member of Westfield’s National Honor Society, earned a 4.0 GPA during his junior year, completed his remaining merit badges, and finished his Eagle Project. Evan also volunteered two hours a week at Centreville Regional Library.

Troop 30 is a mid-sized troop serving Centreville, Clifton, Chantilly, and surrounding areas since 1999.