Metamorphosing the Capital Budget in Alexandria? 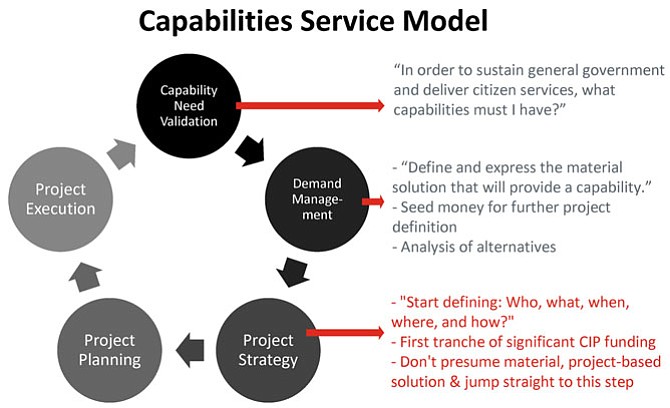 A new sequential capital planning and funding model the Task Force is honing. Chart is adapted from meeting slides.

The clock is running out for public input before a “blue ribbon” task force delivers Capital Improvement Program (CIP) recommendations to the City Council and School Board.

The Ad Hoc Joint City-Schools Facility Investment Task Force will present its first of two deliverables: a recommended CIP prioritizing 28 specified city and public school facility projects. These projects represent nearly two-thirds of a billion dollars of investment through FY27, currently underfunded by some $106 million. Council and the School Board will hear the Task Force’s recommendation to optimize the city-and-schools’ collective spending Nov. 4 and Nov. 9. The public may attend these meetings, as well as offer final preliminary comment at the Task Force’s Nov. 2 plenary meeting. The schools’ superintendent will present her proposed FY19-28 CIP Nov. 30.

The schools in particular have frontloaded projects, outpacing funding over the CIP’s 10-year scope. The Task Force has been sifting projects according to their need and relative urgency, readiness and overall value to Alexandria, and then pushing lower scoring projects to later years. Some members believe certain projects, however urgent, have not been adequately and transparently vetted in order to proceed immediately. These include converting a recreation center for school “swing space;” a new high school; vehicle maintenance facility overhauls; and beefing up city pools. Such projects might benefit from additional “seed money” to explore more options.

“It is inherent in public organizations … to spend money that is in budgets,” said Task Force member Elliot Branch. “So if we put that money there, that money will get executed. Whether it’s well executed or not, it will get executed. And that’s a problem.” He added later: “Have you ever tried to kill a project inside a government? … They’re like zombies. So I’m very careful about when I say … that project really ought to go [forward].”

Next, the task force will turn its full attention to its second deliverable, due in December: suggesting improvements to overall capital planning and implementation processes.

“This is a problem that will not go away,” said Branch. “We can solve this problem in this CIP, and when I’m retired playing golf in 10 years there will be another nine people sitting around the table doing the same kind of prioritization if we don’t fix the process.”

Some recommendations the Task Force has been honing so far include: