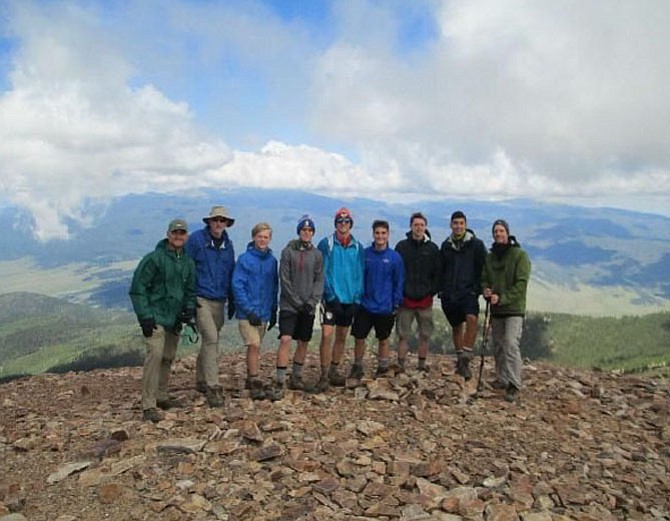 Joe Margraf and his crew after they summited Baldy Mountain at a height of 12,441 feet. Photo courtesy of Joe Margraf

A glimpse of Cathedral Rock for BSA Troop 1346.

Nick and Joe Margraf at Philmont Scout Ranch.Joe is the Scoutmaster for the Boy Scouts of America Troop 1346 in Burke. On July 24, he led a group of 21 Boy Scouts and 7 leaders on a 100-mile trek through Northeastern New Mexico.

Corporate and association meeting planners always remember that one special meeting or event that stands out from the hundreds of others they have worked on over their career. It is even more rare when a planner can tie in a volunteer organization that he/she works with into a successful event. That is exactly what Joe Margraf was able to achieve this past summer.

Margraf is the manager of the Meetings, Incentives, Conferences & Events (MICE) Division for Omega World Travel in Fairfax. But in his spare time, he is the Scoutmaster for the Boy Scouts of America Troop 1346 in Burke. On July 24, he led a group of 21 Boy Scouts and 7 leaders on a 100-mile trek through Northeastern New Mexico. The group spent 12 days hiking the New Mexico wilderness on a visit to Philmont Scout Ranch. Located in Cimarron, N. M., the 214-square-mile ranch is in the rugged wilderness of the Sangre de Cristo Mountains and features trails climbing from 6,500 feet to 12,441 feet.

THESE TRIPS are a once in a lifetime opportunity for boy scouts and their leaders, and the preparation for them starts over a year and half in advance. The adult leaders handle all the logistics associated with each trip. In fact, Margraf had planned two other past trips to Canada and the Bahamas, but this one was longer with triple the number of participants. Last fall, Margraf had just started working at Omega World Travel and decided to approach his director about having Omega help with the boy scout trip.

Margraf’s meeting team at Omega was able to assemble several detailed proposals for the BSA group to consider. Omega incorporated and negotiated air, ground transportation and hotel options for the Boy Scout crew. Because the scouts and leaders need to acclimate to the high altitude of the area, Omega suggested two cities for the scouts to tour prior to their arrival at Philmont Scout Ranch; Denver/Colorado Springs or Albuquerque. Both cities were above 5,000 feet allowing for good acclimation.

Omega’s meetings division researched the local areas of both cities to provide activity options for the group during those two days. The scouts ultimately voted on flying into Denver, and spending two nights in Colorado Springs. While there, they visited the Garden of Gods, the U.S. Air Force Academy, the Cogwheel Railway to Pike’s Peak and the U.S. Olympic Training Center. It was the perfect pre-trip before beginning the intense journey at Philmont. With a major part of the planning out of the way, the Scouts and leaders were now able to focus on the intense training required for their trek.

Since the boy scout crew is boy-led – meaning the adult advisors are only there for guidance and safety, Margraf’s 16-year-old son, Nick was the Crew Chief for his group during the Philmont trek. It was his responsibility to handle all aspects of the hike. Each participant had to carry a 40-50 pound backpack containing all of their supplies, including: tents, first aid supplies, clothing, camp stoves and freeze-dried meals while hiking between camps. The hikes were at a high altitude in bear and mountain lion territory, up and down steep climbs (switchbacks) and often during severe rain storms. The crew never passed a house or town along their journey, and only stopped for a short time every few days at bear-proof “commissaries” to grab more necessities. One of the most difficult yet highly anticipated parts of the trip was the climb to the summit of Baldy Mountain (elevation 12,441 feet.)

WHILE ON THE TRAIL, the Scouts participated in backcountry programs including rock climbing, building railroad track, black powder shooting, hatchet throwing, blacksmithing, western campfires as well as a conservation project centered on the upkeep of Philmont’s ecosystem.

Cell phones were limited to the leaders; however, service was only available at the highest peaks or openings, with nowhere for charging. Margraf had all the scouts leave their phones behind and he too followed their example. So instead of the scouts being on their phones, they all needed to hang daily bear bags, cook and clean in the backcountry and set up tents before almost daily fast-moving mountain storms crept in during the early afternoons.

Margraf said, “This was truly a once in a lifetime experience and I am so glad I was able to complete the trek with my scouts, fellow leaders and most importantly, my younger son Nick. It was his leadership and daily encouragement that helped me immensely while on the trail.”