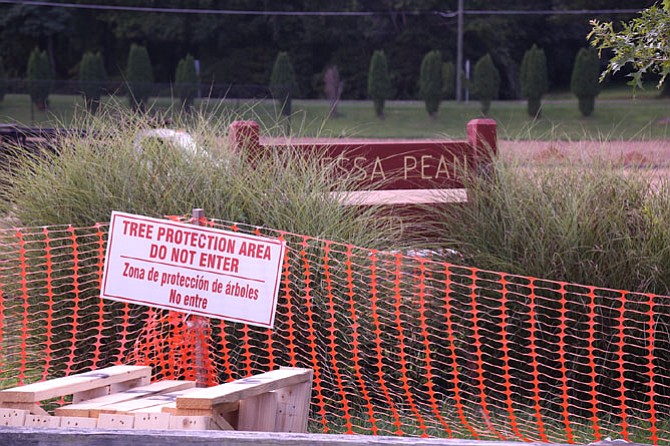 The sign marking the field as “Vanessa Pean Field” and the trees and memorial for Vanessa Péan have been marked off by orange safety barrier fencing. Photo by Fallon Forbush.

The Bermuda grass at Vanessa Péan Field No. 7 at the Great Falls Nike Park has been removed against the wishes of Péan’s mother, Gail Péan.

Péan Field No. 7 at the Great Falls Nike Park from natural grass to turf, despite threats of a lawsuit from Péan’s mother.

“The contractor is currently working on grading and installation for subbase for the field,” Judith Pedersen, a spokesperson for the Park Authority, told the Connection over email. “We are scheduled to finish construction by mid-October.”

The plans for the renovation, announced to the public in May, were met with a steady stream of opposition as the news trickled throughout the Great Falls community, first from the Great Falls Citizens Association, then local advocates with the national Safe Healthy Playing Fields Coalition and Gail Péan, the mother of the late teen whose name graces the sign and memorial on the field.

The qualms of the renovation were over the original plans to use crumb rubber, which opponents say is unsafe because of its potential to be carcinogenic.

THE PARK AUTHORITY reached a compromise on Thursday, July 27, when the county agreed to abandon installing a field that used a crumb rubber and cork infill system from the FieldTurf company called CoolPlay. In its place, the county still purchased the materials from the FieldTurf company, but instead of its CoolPlay system, the compromise field will use the company’s EcoGreen system, which uses an infill system made entirely of TPE, or thermo plastic elastomer.

TPE is a non-toxic, heavy-metal-free infill that is 100 percent recyclable and

Workers use a Bobcat T300 Compact Track Loader to move dirt and flatten the field on Thursday, Aug. 31. Construction for the new 360-yard-by-210-yard synthetic turf field is slated to be completed in time for the fall soccer season.

reusable when the field is replaced, according to the Synthetic Turf Council, a trade association for the synthetic turf industry. TPE infill uses virgin-based material, while crumb rubber is composed of used tires.

Though the parties who are funding the work — The Fairfax County Park Authority and the Great Falls Soccer Club — are happy with the compromise, Gail Péan and anti-turf advocates are still demanding the field only use natural grass systems.

Péan asked that the one TPE field that already exists at the Nike Park (field No. 4) be studied to ensure the synthetic materials don’t have any adverse impact on the environment and nearby neighbors’ well water quality.

In an email to Dranesville District Supervisor John Foust and David Bowden, director of the Planning and Development Division of the Park Authority, on Thursday, July 27, Péan threatened legal action if the county did not conduct a referendum and turn the decision over to the residents of Great Falls, stating the use of TPE disregarded the county’s fiduciary responsibility to taxpayers.

“I plan to take legal action if I do not receive a written guarantee that you will not begin construction of a TPE field on Nike # 7 July 31, 2017, without an informed Great Falls resident community vote,” her email said.

She also demanded the park authority release any environmental studies conducted on the TPE field No. 4 that exist.

All requested documentation was provided to Péan via the Office of the County Attorney after she made a Freedom of Information Act request, according to Pedersen.

These documents included safety data sheets authored by various companies about the materials that will be used for the artificial turf. The data sheets found no toxicological or ecological concerns for the grass yarn made of low-density polyethylene. However, a data sheet authored by the SO.F.TER. Group found that the TPE pellets could cause “negligible hazard at ambient temperature.”

The pellets are not digestible, but “no known health hazard appears to be posed by the ingestion of small amounts of this material,” the data sheet said of ingestion.

There are also ecological concerns with the pellets, as they are non-biodegradable. “The product is not dangerous, but it can be poisoning for aquatic and terrestrial organisms when ingested,” the data sheet said.

When the material becomes heated to high temperatures is when the pellets can create hazardous conditions for humans.

“Although it is highly dependent on temperature and environmental conditions, traces of toxic and/or irritating gases can be released,” the data sheet said.

“Do not remove molten product from burned skin,” the data sheet said of contact with the skin. “This should be done by a physician.”

“In case of contact with molten material immediately cool the affected area by means of large amounts of water or ice and consult a physician,” the data sheet said of contact with eyes.

A SEPARATE DATA SHEET authored by Whibco of New Jersey, Inc. also found hazards with the field’s sand base layer—crystalline silica in the form of Quartz—if inhaled.

“Breathing silica dust may not cause noticeable injury or illness even though permanent lung damage may be occurring,” the data sheet said.

Inhalation of the dust could have serious chronic health effects, including Silicosis lung disease or cancer, the data sheet said.

The Connection requested to see any studies that have been conducted on the existing TPE field (No. 4) at the park from the Park Authority if they exist. The park authority has yet to send any such data. Pedersen told the Connection over email that, “No additional studies are underway.”

In the meantime, Péan still plans on pursuing litigation against the county.