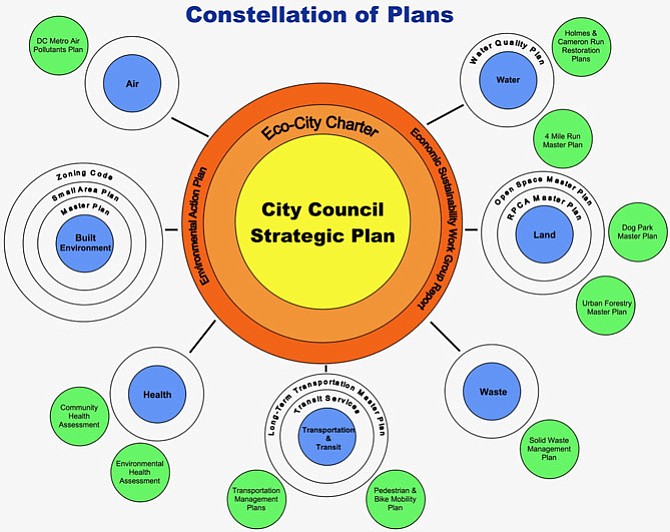 Together, the Eco-City Charter and Environmental Action Plan intend to form the center of the city’s top-level planning efforts, second only to the Strategic Plan. Source: EAP

Alexandria’s Environmental Policy Commission (EPC) kicked off a 2-year process to revamp and re-energize the city’s Environmental Action Plan (EAP) at a retreat on Saturday, Sept. 9.

The EAP says it is the “road map for city leaders, staff, and citizens to implement the sustainability visions and principles set forth in Alexandria’s Eco-City Charter.” The charter, which City Council adopted in 2008, defines sustainability as a holistic governance philosophy, including both human and non-human dimensions. Sustainability “involves balancing and integrating environmental, economic, health and social issues so as to maximize the quality of life for all of Alexandria’s residents;” ensures “the ability of future generations to meet their own needs;” and “requires us to consider the impacts of our decisions and actions beyond the City of Alexandria.”

The charter outlines its general vision under 10 headings: land use and open space, water resources, air quality, transportation, energy, building green, solid waste, environment and health, emerging threats (namely, climate change), and implementation (namely, collaboration across societal sectors). In 10 corresponding chapters, the EAP lays out specific targets for the period 2009-2030. The city is supposed to review and update the EAP and charter every 5 and 10 years, respectively.

Together, the two documents intend to be at the center of the city’s “constellation of [top-level] plans,” second only to the city’s Strategic Plan.

HOWEVER, certain advocates have expressed doubt regarding the documents’ centrality in practice. The city has deferred the EAP revision process since 2014, bumping it “relative to other priorities,” said EPC chair Jim Kapsis.

Joe Schilling, formerly of Virginia Tech, now of Urban Institute, who played a role in bringing about the documents, also shared reservations in a June interview. He wonders whether city officials truly want to prioritize sustainability as the city’s integral “guiding principle,” rather than reduce it to just one environmentalist concern among many other concerns. He believes the push for sustainability “ran out of gas,” in part because of a “circle the wagons” budget mentality following the Great Recession — a reaction he called “understandable” but “shortsighted.” “Sustainability could be a galvanizing and effective community and economic development strategy for the city,” he said in a later email. While he acknowledged the piecemeal infusion of sustainability into certain city activities, he would rather see a wholesale reevaluation of the Master Plan “with sustainability at the center,” echoing recommendations he made to the city in 2015.

The city’s recent hiring of Ellen Eggerton as its first sustainability coordinator at least partially fulfills Schilling’s hope that the city would more fully “institutionalize” sustainability.

Kapsis also thinks that having Eggerton onboard will be a “big deal” moving forward. Eggerton has 11 years’ experience working in a similar field in Fairfax County. “One of [her] first assignments with the city will be to spearhead the [EAP] update,” said Craig Fifer, a city spokesman, in a statement.

EPC PRIORITIES discussed at the retreat include honing and tracking the EAP’s goals.

“Our number one charge … is getting brutally specific about what our priorities are so that the council knows what our priorities are,” said Kapsis. He wants to “avoid a laundry list of things” and focus on 2-3 “relative priorities” per EAP chapter. Echoing this, one Alexandria resident who attended the retreat expressed confusion about the city’s prolific and lengthy eco-related plans.

Zeroing in will require balancing impact potential against feasibility.

For example, the city cannot dictate the manner in which Dominion Energy, Alexandria’s utility company, generates electricity. “Dominion’s fuel mix is our fuel mix,” unless Alexandria creates its own municipal utility, “a very, very difficult and expensive proposition,” said Kapsis.

But the city could more easily increase its utilization of Renewable Energy Certificates (RECs) to offset the electricity consumed by city-owned buildings, said EPC vice-chair Praveen Kathpal. RECs are a means of purchasing renewable energy on the electric power grid, even if from a non-local source, thereby “help[ing] the renewable energy market to grow,” according to an EPA tutorial.

Kathpal believes the city could invest about $80,000 per year to offset 100 percent of its buildings’ electricity usage through RECs, up from 19 percent currently. He thinks the city could compensate for this expense simply by upgrading more city lighting with LEDs; installing LED lighting in four parking garages has already realized an annual savings of $38,000.

Increasing REC usage could stimulate the “branding effect of Alexandria as a clean energy city,” attracting “clean energy and other sustainable industries,” he said. “Washington, Trump administration or not, is going to be a hotbed of that activity. … And what better way to signal that we want Alexandria to be a home for this cluster of industries that’s growing than by saying that we’re going to be 100 percent and actually taking some action towards that?” He cited several cities — including ones in Red states and with similar oversight from their state legislatures — that have already taken similar action.

“Talk is cheap. At the political level, cities go around signing up for every single little thing. And it’s great for groups of mayors to come together and high-five each other,” said Kathpal, paraphrasing a June article published by Greentech Media, a clean energy market analysis firm. He mentioned several commitments and endorsements made locally, including, most recently, the city’s joining the Mayors National Climate Action Agenda in support of the Paris Agreement on climate change. “But what we really want as a community is, ‘Where’s the accountability for tracking our progress against these commitments?’ … These are things we need answers to.”

The city “maintain[s] three items related to the EAP,” said Fifer: an inventory, currently being updated, of city environmental policies, plans and programs; an annual Eco-City progress report; and an “internal spreadsheet” of unspecified function “that is not used to track targets and is not regularly updated.” None of these indicates current progress toward achieving the 27 specific objectives that the EAP comprises, as compiled in an appendix.

In a 2015 report, Jimena Pinzón, then a Virginia Tech graduate student assisting Schilling, critiqued the 20 indicators that the annual progress report tracks. She rated all but two of the indicators “fair” or “poor,” reckoning that several do “not link to any specific goal in [the] EAP” and/or are “not meaningful” to the general public. The city has slipped against the two indicators that Pinzón rated as “good,” according to the 2016 progress report, the latest available on the city’s web site: Per capita energy use increased 12.8 percent as of 2014 (data is not given for 2015 and 2016) and per capita water use increased 0.9 percent as of 2016, both against 2005 baselines. Nine indicators are missing data for at least one year, and 14 do not indicate corresponding targets. The city tracks other indicators as totals rather than on a per capita basis. For example, the progress report tracks the city’s solid waste recycling rate as a percent, but not, as specified in the Eco-City Charter, by “volume.”

“The City is working on ways to both better summarize all EAP-related tracking data in one place, and to improve how we communicate progress on goals with the public,” said Fifer.

The EPC currently plans to meet twice a month from October to June. All meetings are open to the public. Residents can access EPC materials online at www.alexandriava.gov/EnvironmentalPolicyCommission.