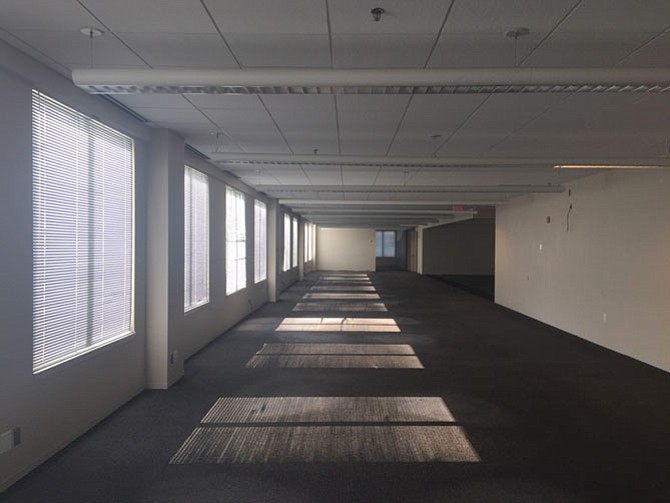 The West End school interior spaces will be converted into classrooms. Photo by Vernon Miles.

Alexandria — Inside, 1701 N. Beauregard still looks like an office space. The entrance is 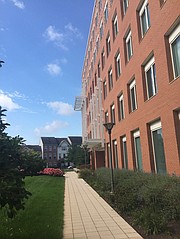 fronted by a wide glass lobby. A television by the elevators displays Asian stock market prices and the latest technology and political updates. But there has been an ongoing trend in urban areas across the country that has found a new type of use for empty office spaces. By Fall 2018, the office building will be transformed into an elementary school.

Lack of accessible land has forced many Northern Virginia jurisdictions to look to empty office space as potential schools. Bailey’s Upper Elementary for Arts and Sciences in Fairfax was the first, built inside a five-story brick office building.

The West End’s first four floors will be converted into the new school, while 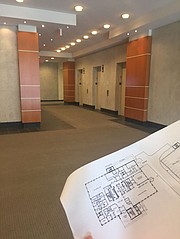 The interior lobby of the new West End school with plans for the building’s redesign.

fifth and sixth floors will be converted to administrative space. Whether that space goes to the schools or the city is still yet to be determined. The two functions are kept separate though, with separate elevators and a gateway on the stairwell. The new elementary school will accommodate 650 students.

Construction on the site is scheduled to begin January 2018. The building was purchased by ACPS for $15 million, with retrofitting estimated to cost $23 million. Helen Lloyd, communications director for ACPS, said rent was estimated to be between $6 to $7 million each year, but because the building was under foreclosure they were able to get a relatively cheaper price for purchasing the property

While the exterior will remain mostly the same, the interior of the building is being replaced. New walls will be built to modify the wide hallways into classrooms. The classrooms are located on the outer ring of each floor, so every room will have access to sunlight.

One of the challenges offices being redeveloped as schools face is the lack of outdoor accessibility. The West End project gets around this with a playground and basketball court located on top of the adjacent parking deck and a bridge being built connecting the top layer of the deck to the school.

“The playground was a challenge,” said Azuka Bartlet, construction program manager for ACPS. “We had to come up with creative solutions to each challenge.”

At its meeting on Sept. 16, the City Council approved the designs for the West End school with a provision that requires the school to construct a physical boundary between the West End School and the educational training facility it shares a courtyard and parking garage with. As the school is being prepared for construction, ACPS is currently in the search for a new principal.

“It’s not a normal search,” said Lloyd. “They will have to hire the staff for the school, so we’re looking for someone in experience with setting up a new school.”

When the West End school is built, it will be the first entirely new school in ACPS since Samuel Tucker was built in the 1990s. Lloyd said the school system had looked at other locations for a new school, but the chosen location was one of the only ones that offered the needed space at the right price.