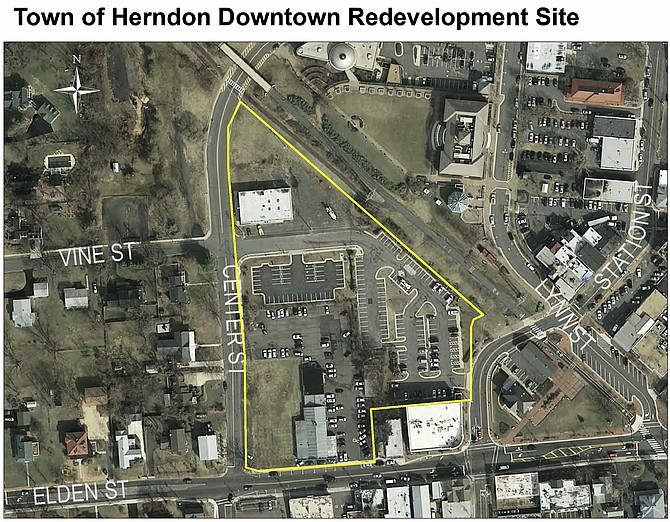 The land, which is owned by the town, is generally described as located between Station Street to the east, Center Street to the west and south of the property known as the Washington and Old Dominion Regional Trail (the owner of which is the Northern Virginia Parks Authority), and north of Elden Street, but excluding parcels at 754 Elden Street and 762 Elden Street. Photo courtesy of the Town of Herndon

The Town of Herndon and real estate firm Comstock Partners completed a comprehensive agreement that will guide work for the redevelopment of nearly five acres of downtown Herndon. To become official, the Herndon Town Council will need to vote to approve the proposed agreement.

The town council will hold a public hearing on the proposed agreement on Tuesday, Oct. 24, at 7 p.m. in the Herndon Council Chambers at 765 Lynn Street. It is anticipated that the council will vote on the agreement that evening, following the hearing.

If the agreement is approved by council, a budget amendment would also be required by a council vote to approve the town’s newly-proposed expenditures. Under the terms of the agreement, the town isn’t scheduled to make any payments until late in fiscal year 2019, according to Anne Curtis, a town spokesperson. Once the town’s financial advisors recommend how to pay for the project, the town manager will propose an approach for the council to vote on.

Negotiations began last year when the council adopted a resolution on Nov. 30, 2016, that directed town staff to move forward with negotiations on Comstock’s proposal, which was submitted in response to the town’s request for proposals that was publicized on Nov. 2, 2015.

The RFP called for a four-story, mixed-use residential building, a three-story mixed-use commercial building, a joint public-private parking structure and an 18,000-square-foot arts center, among other features.

THE PROPOSED AGREEMENT between the town and Comstock is reflective of Comstock’s proposal, which comprises approximately 281 residential apartments, approximately 17,600 square feet of retail space, an 18,000-square-foot arts center and an approximately 761-space parking garage. If approved, Comstock anticipates beginning construction on the project early in 2019, with completion estimated in 2021.

“This proposed comprehensive agreement comes after months of spirited negotiation between the town and Comstock,” Town Manager Bill Ashton said in a press release. “Ultimately, we came to agreement by working toward the same vision: a vibrant, energized downtown that is financially viable both to the developer and to the town. We are grateful to Comstock for their collaborative spirit throughout these negotiations and look forward to public comment and town council deliberations.”

Ashton will outline the agreement and provide answers to specific questions for the public during a community meeting on Thursday, Oct. 12, at 7 p.m., at the Herndon Council Chambers.

The town spent $5.8 million purchasing the land to be developed. As part of the proposed agreement, the town will be selling the land to Comstock and contributing an additional $3.6 million in allowances, which include: $500,000 for environmental remediation; $500,000 for transitional public parking; $100,000 for culvert repair; and $250,000 for the relocation of Arts Herndon’s ArtSpace Herndon, an art gallery and performance space at 750 Center Street located on the site.

Comstock will be providing what the town estimates to be $12 million in assets, which include: 339 public parking spaces in a parking garage, to include 60 for the arts center and 59 for the retail space; the 18,000-square-foot arts center; and $505,000 in proffer funds for town recreational services.

“We are excited to have an opportunity to participate in the reshaping of Herndon’s downtown and look forward to working with the leadership of the town of Herndon to finalize plans and commence development in the near future,” Christopher Clemente, CEO of Comstock, said in a press release. “Comstock is committed to creating a vibrant cultural arts district and community open spaces together with high quality residences, exciting retail spaces and an accessible structured parking facility. We take great pride in delivering quality developments that fit well in the community where they are located and we look forward to partnering with the town of Herndon on this important project.”

Information about the proposed agreement is available online at www.herndon-va.gov/downtown.

THE TOWN released a separate RFP this year in April seeking proposals from arts organizations to operate, manage and conduct arts programming at the future arts center. Accepted proposals were from nonprofit, arts-related organizations that are located within a 25-mile radius of the downtown site. Preference was also to be given to organizations serving the Herndon community.

The evaluation committee is currently reviewing two proposals that were received from Arts Herndon and the NextStop Theatre Company, according to Curtis.