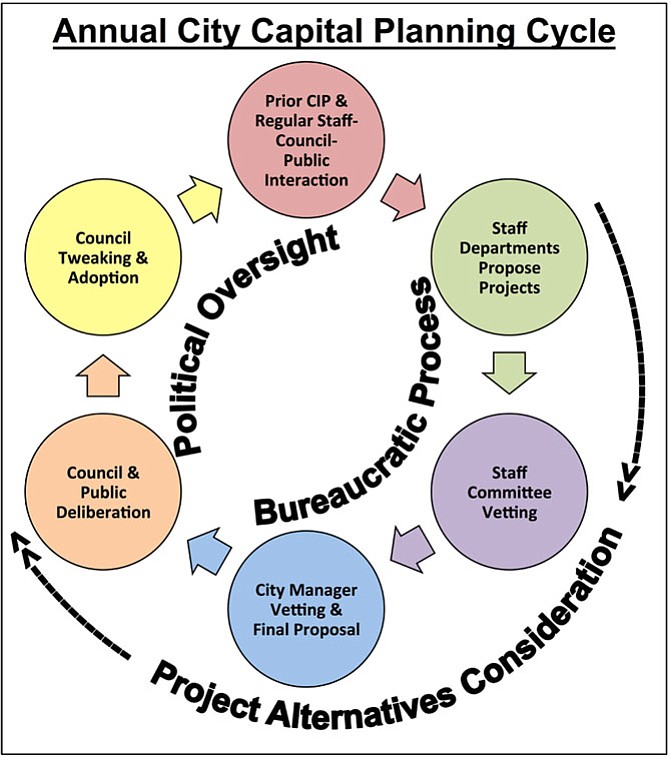 The annual process for building the city’s 10-year Capital Improvement Program (CIP) or long-range budget for major infrastructure projects. An ad hoc capital planning advisory task force, established by City Council to streamline existing city and public schools facility projects and processes, has raised concerns about the vetting of project alternatives. Task Force members have worried that capital projects take shape inside government department “silos.” As a result, they say, City Council does not have the full benefit of considering potentially cheaper options that would meet the same needs, as well as free up resources for additional, currently unmet needs. They want more systematic justification of departmental staff decision-making so that council can better optimize the total city-and-schools capital portfolio.

“I think all the decisions are being made without the benefit of council really weighing the pros and cons across the city. And they’re not really given an option” to weigh alternatives, said Task Force member Dwight Dunton at the group’s most recent meeting last Thursday, Sept. 21. He thinks “one of the things that has gotten us to this point is that [governmental departments are] working really hard in their silos” to come up with the “perfect solution,” rather than a likely less expensive “good-enough solution.” He believes council makes largely binary, yes/no decisions about projects that staff has already mostly conceived in this manner, rather than an array of options that meet the same need. As a result, council can address fewer capital needs in the city-and-schools’ total “portfolio” with available resources.

For example, Dunton previously noted the cost to renovate city hall — currently projected at $35 million, not including the cost to relocate operations temporarily. That works out to “$435 [per] foot. Ignoring the historical aspect — the geographic location of being in downtown Old Town — [that cost] for effectively an office building is at the extreme high end of what it would cost to acquire [and] renovate a more modern facility,” he said. The “critical city service” that city hall provides is space for officials, the administration and citizens to conduct the business of government. But that’s not the same thing as a specific building. “It’s easy to confuse the service with the currently identified alternative.”

Others have expressed similar or related opinions.

“Let’s separate ‘capability’ from ‘project,’” said Task Force member Elliot Branch. A given capability need doesn’t automatically demand one specific project or location; others may fit the bill. He wants a “crisp consideration” of all options. That should entail more than “a bunch of guys sitting around a table, saying, ‘Hey, we thought about some stuff, but we really like it here, so we’ll put that in a budget.’” Consideration should entail “a clear scope around the service to be delivered out of that particular capital project; the metrics used to judge whether that service is being delivered adequately or not, and the capability that particular project provides to delivering that service; the alternative[s] — either places or means — of delivering that service; and why this was chosen as the best [option].”

Branch cited the plan to upgrade the city’s vehicle maintenance facility as the best-articulated need in a draft revision of project descriptions. The $6.5 million plan’s justification reads: “Maintenance keeps the building functioning properly, decreases costly repairs, and promotes a healthy environment. … Fleet operations could be heavily affected if building equipment fails. Services such as snow removal, trash removal, police response and many others will be affected if fleet operations are hindered.” Branch said, “I understand why they need that ....” As a negative example, he cited the proposed $6.8 million overhaul of Gadsby’s Tavern. The justification says that the building comprises a museum, restaurant and American Legion, and lists the building’s problems. “I understand it needs to be fixed. But I don’t understand why I need it to deliver city services. … There’s merit there, but we have not made that merit explicit. And that needs to happen,” he said. The Task Force has suggested Gadsby’s Tavern, among other projects, as a possible candidate for some degree of privatization.

Task Force members have also expressed doubt about the thoroughness of the vetting of other slated projects, including a new high school at the Minnie Howard campus ($118 million); school swing space at the Nannie J. Lee Memorial Recreation Center ($42 million); replacing George Mason Elementary School at its current location ($41 million); a new centralized pre-k center ($28 million); and renovation of the health department building, which “is more expensive than building a building from scratch,” said Dunton.

In the CIP development process, department heads put forward their capital project requests, which the staff-comprised Peer Technical Review Committee and Capital Improvement Program (CIP) Steering Committee then flesh out and synthesize into a draft CIP. Those bodies report to the city manager, who finalizes a CIP proposal for council and the public’s consideration.

“Some [alternatives consideration] gets addressed through the management process and the management structure outside of the CIP … and then inserts itself into the CIP at the appropriate time,” said Morgan Routt, the city’s budget director, at an earlier meeting.

But City Manager Mark Jinks does not believe the budget process is, in its fundamental ordering, driven primarily by the city bureaucracy rather than the council. He explained in a series of earlier emails: “We don’t start from a blank slate with the CIP, but we start with the 10-year plan that council had adopted the previous May, as well as with directions from many council actions and processes that are ongoing when council approves a plan, or direction or feedback given when staff gives an oral briefing.” Moreover, “The fact that the CIP is a 10-year plan (unusually long for a local government) means that most proposed projects are in the ‘out years’ for many years until their funding years arrive. [This] allows many years of visibility and transparency for not only council but the entire community, so that all stakeholders can understand what is proposed, and weigh in to staff and council on capital investment proposals many years before those proposals ever are funded and approved.”

Similarly, “The schools … have [a Long Range Educational Facilities Plan] with a process that has looked into what actual alternatives could be and they’ve vetted that through their community,” said Task Force consultant Kayla Anthony. “That may not be the same set of alternatives you want them to look at. But there has been some process followed for that.”

Still, “it actually doesn’t sound like alternatives were identified and fully vetted on some of these [slated projects],” said Wagner.

“We don’t know,” replied Hampton. Addressing that state of not-knowing has the Task Force’s full attention.