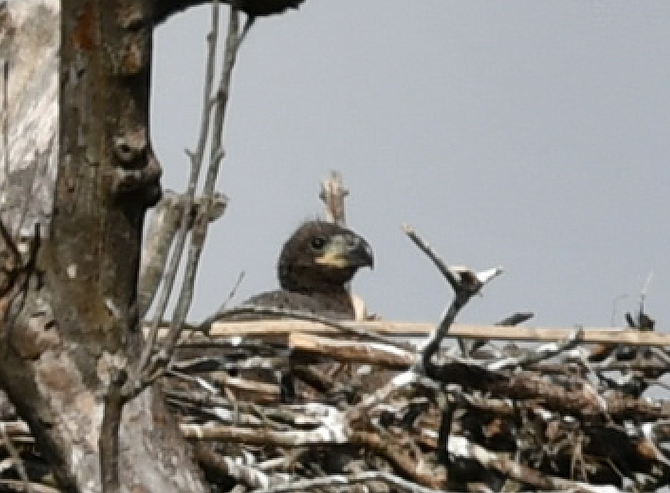 An eaglet peers over the nest. Photo by Christina Tyler Wenks

“We hope these additional nests are indicators of increasing biodiversity of species and that means the ecosystem is healthier — birds, amphibians, and mammals — but this takes many years.” — Julie Gurnee, Riverbend Park naturalist 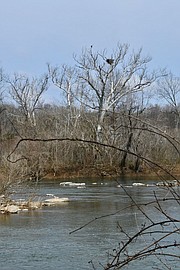 A break in foliage along Riverbend Park's Potomac Heritage Trail allows outdoor enthusiasts to view an eagle's nest on Minnehaha Island in the Potomac River. With binoculars, eaglets are frequently visible. 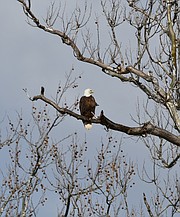 A few trees away from her nest and eaglets, a mother eagle watches for predators above and food sources below.

A pair of bald eagles is raising three eaglets on Minnehaha Island in the Potomac River. This is the third bald eagle nest in the Great Falls area this year and the second known to contain hatchlings. The proximity of the nests tells naturalists at Riverbend Park that the area’s ecosystem is improving.

Last week, the Potomac Conservancy issued a report that said the Potomac River’s health is better than recent decades. The river’s report card gave the Potomac a B — up from a D in 2011.

“We hope these additional nests are indicators of increasing biodiversity of species and that means the ecosystem is healthier — birds, amphibians, and mammals — but this takes many years,” said Julie Gurnee, Riverbend Park naturalist.

WILDLIFE SPECIALISTS and national park rangers say bald eagles actively nested on Conn Island near Great Falls National Park for the past 20 years. A pair of eagles are nesting on Minnehaha Island for a second year. A young eagle that fledged last year is often spotted fishing in the Potomac River by the Riverbend Visitor’s Center.

Wildlife enthusiasts are watching a third bald-eagle nest on Watkins Island near Riverbend Park. “What’s surprising is their proximity to each other,” said Gurnee. “This is much closer than we expected to see another eagle nest.”

Pollution and lead, such as buckshot and fishing weights, threaten eagles scavenging during winter months, said Alonso Abugattas of the Capital Naturalist website and educator at Northern Virginia parks.

VIRGINIA BLUEBELL blooms are expected to peak the week of the Riverbend Park’s Bluebell Festival, which is Saturday, April 14, from 10 a.m. until 2 p.m. During the festival, a scope will be set up along Potomac Heritage Trail so visitors may observe eagle-nest activity. Festival admission is $7 online and $9 on site.