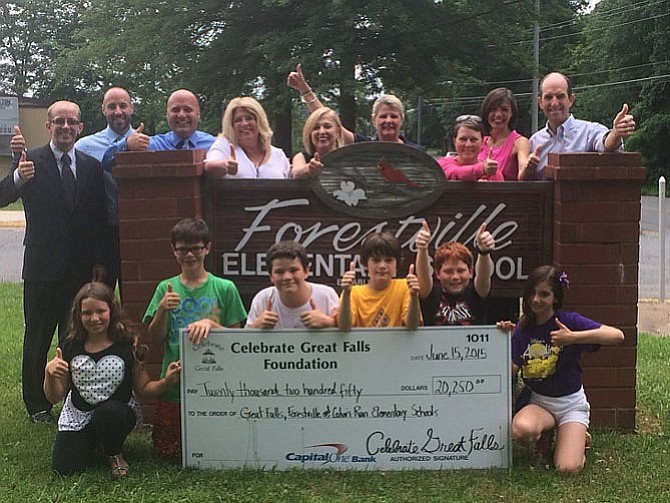 Students and representatives from the Forestville, Colvin Run and Great Falls elementary schools and the Celebrate Great Falls Foundation gather at Forestville Elementary on June 15, 2015 for the tournament and online auction check presentation. Archive photo

The Celebrate Great Falls Foundation (CGFF) annual golf tournament includes a silent auction that has grown from just a handful of items generating a couple of thousand dollars to a major event that netted over $12,000 last year. This double-header fundraiser gives sizable checks to each of the three local elementary schools and is only made possible by the hard work of volunteers.

Missy Perkins has volunteered in some capacity every year since moving here in 2014. She chose the golf tournament because she had prior experience running a charity and wanted get involved in the community to meet new people.

She also said there were missed opportunities of donations by the schools, such as “Principal for the Day” or VIP seats at sixth grade graduation, which were hugely popular at her last school. Perkins then took the auction online, giving everyone the ability to bid on the school experiences and other donations. “I don’t quite remember the actual figures, but I believe that we increased the profit from the silent auction by almost double and we definitely captured a much wider audience of bidders.”

HER FAVORITE PART is helping with registration on the day of the event. “It is so nice to meet and greet parents, sponsors, local business owners and Great Falls residents. I also love seeing the creative auction items/experiences that the teachers come up with.”

Perkins explains why this is an important event for the community. “Our elementary schools receive less funding from the state compared to other school districts. The proceeds from the golf tournament are donated directly to our schools and help them improve/update the educational resources that directly affect our children. I feel that it brings the residents together for a common goal.”

Another key volunteer, Deanna Keys is a longtime area resident whose four children attended Forestville and loved it. “When I had the opportunity to help the school raise money for laptops by organizing and offering an online school auction, I was all in. It was a big success, raising about $11,500. Afterward, Erin Lobato (Director of CGFF) asked if I would help with their auction that spring.” She incorporated many things that worked in the Forestville auction, including the same online auction site. Keys also widened the target base for requested donations. “Donations were requested from national companies to D.C. area restaurants/attractions down to local businesses. The local businesses have all been the most generous in their support. They've donated items and services such as handyman for a day, tree planting, an ice cream party, horseback riding camp, and financial services.”

She echoes the sentiment shared by Perkins when talking about community involvement. “I feel that the CGFF golf tournament and auction is an important community event as it really brings the whole community together for the children. The support of the community businesses has been impressive and the families have responded by enthusiastically participating in the auction.”

DONATIONS are now being accepted for the Silent Auction to be held May 1–14, 2018. CGFF gladly accepts gift cards and personal services such as babysitting hours, pet sitting hours, sports lessons for kids, yard work hours, or any professional consultation. For more information, go to https://www.celebrategreatfalls.org/online-silent-auction/.