Perfect Day for an Easter Egg Hunt in Herndon
Votes

Perfect Day for an Easter Egg Hunt in Herndon 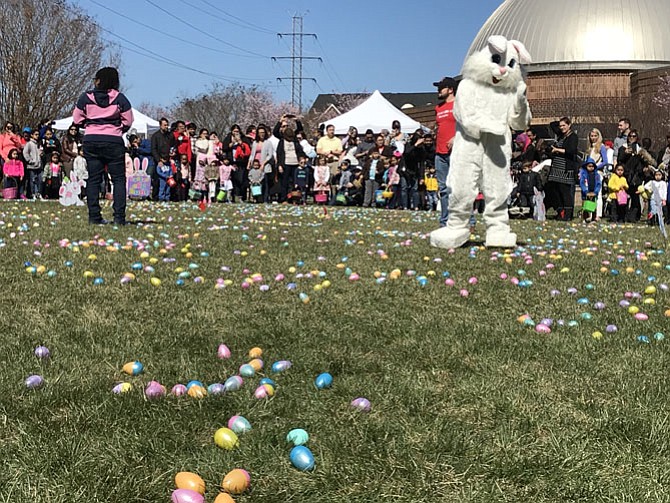 The Easter Bunny prepares for the next age group of children to gather eggs at the Herndon Easter Egg Hunt. It was more like an “Easter Egg Pick-up” rather than “hunt,” much to the delight of the children and parents. Photo by Mercia Hobson. 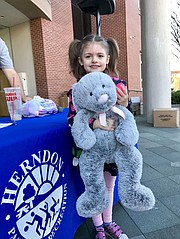 Maggie Losey, 5, of Springfield, beams with delight as she holds the large Easter Bunny she won after finding one of the six Golden Tickets hidden inside the colorful plastic eggs during the Herndon Easter Egg Hunt. 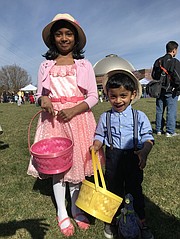 Nandika Karthik, 7, and her brother Sidharth, 3, of Herndon wear their Easter finery and excitedly wait for the Easter Egg Hunt to begin. 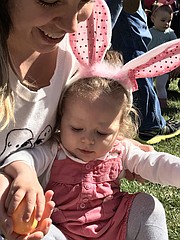 Eva Cuckic, 13 months of Chantilly, hands her mom Jelena one of the plastic eggs she picked up.

The morning dawned clear and crisp, a perfect day for families to celebrate Easter and new beginnings. Well before dawn the staff at Herndon Parks & Recreation set about to fulfill their billing for “one of the most exciting annual events for children” — the Town of Herndon’s Easter Egg Hunt.

The extravaganza, held at the Herndon Town Green located behind the Herndon Municipal Center, 777 Lynn Street in Herndon on Saturday, March 31, 2018, drew an estimated 2,000 attendees.

The morning-long event featured age-specific hunts, spring-themed fun and games, live music, and even a petting zoo brought in by Frying Pan Park, Fairfax County Park Authority. The adjacent Herndon Fortnightly Library offered storybook readings and a bunny and Easter crown crafts. Of course, the Easter Bunny made an appearance so parents could snap a picture of their child with the festive rabbit.

John H. Walsh, Recreation Services Supervisor II for Herndon Parks & Recreation, was one of the event organizers. He commented about why Easter Egg Hunt holds a special meaning to him. "Growing up in the town and attending this event as a child, makes it that much more important to me. It is an absolute pleasure to see how happy the participants are." Looking out over the crowd of children, parents, and grandparents, he added: "That's why we do this; it makes people happy."

The first age-designated hunt was for the oldest children, ages 5-7. It was set to begin shortly after 9:45 a.m. The children and their families circled the lawn filled with hundreds and hundreds of candy-filled eggs. Before the emcee could announce, "Ready, Set Go,” the anticipation was too much for one young boy and he darted onto the field. The children around him then followed, as did all the other children who then swarmed onto the field with them. No problem. "I guess it's on," the emcee said laughing.

Obviously, the older children were experienced egg-hunters and must have plotted beforehand how best to scoop up massive amounts of candy-filled eggs in a blink of an eye. To say the search went quickly would be an understatement. Pails, baskets and bags overflowed and all in under 90 seconds. When all the eggs had been snatched up, the emcee announced for the children to empty their eggs because inside two of the eggs were Golden Tickets. Children who found the Golden tickets from each age group would receive a special gift.

Maggie Losey, 5 1/2, of Springfield, bounded up to the stage with a golden ticket in her hand with Dad, Steve Losey, close behind. Maggie exchanged her golden ticket for a stuffed rabbit nearly as tall as she was. "He's soft," she said. "I'm going to take him to my car, then home and then to my bedroom. I want to sleep with him," Maggie said.

"She has a menagerie of stuffed animals," explained her dad, Steve.

The 3-4-year-old age group went next. Most of them had a firm grasp of what was going to happen. They cleared the egg field in a record-setting 2 minutes.

However, it was the littlest ones, the toddlers to twos, accompanied by parents and siblings who hunted for the eggs, not with speed nor focused on quantity, but selectively choosing each one, admiring it and then handing it up to their parents, brothers or sisters to equally enjoy.

The day could not have been more perfect, crisp clear weather, blue skies and families having fun together in the Town of Herndon.