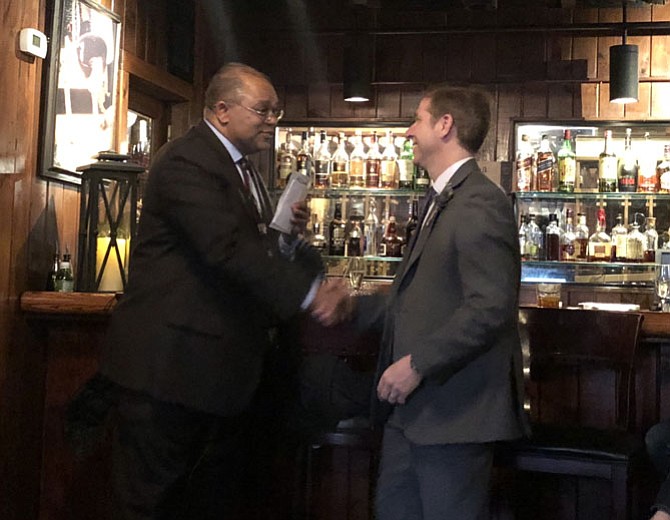 Deputy Chief Dave Huchler, right, is congratulated on his retirement from the Alexandria Police Department by former Police Chief Earl Cook, March 27 at Landini Brothers Restaurant. Huchler has been named the new Chief of Police for the Metropolitan Washington Airports Authority. Photo by Jeanne Theismann.

“So many have contributed to my success. It has been a wonderful career.” — APD Deputy Chief Dave Huchler 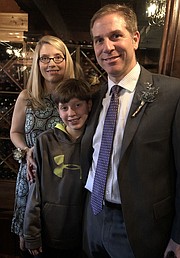 Dave Huchler, right, with his wife Jackie and son Aiden, 11, at his APD retirement party March 27 at Landini Brothers Restaurant.

Deputy Chief Dave Huchler, who briefly served as acting Chief of Police for the Alexandria Police Department, was honored at a reception March 27 at Landini Brothers Restaurant marking his retirement from the APD and celebrating his hiring as the new Chief of Police of the Metropolitan Washington Airports Authority.

“Your service has been second to none,” said Mayor Allison Silberberg in thanking Huchler for his 26 years of service to the community. “Alexandria’s loss is MWAA’s gain.”

Huchler began his APD career in 1991 as a patrol officer, steadily moving up in the ranks to police lieutenant, police captain and deputy chief in 2012.

“This is very emotional for me,” said Huchler in thanking his friends and family for their support. “We try to say this is not personal, that the APD is just business. But it is personal. This is a family.”

Huchler briefly touched on the recent changes within the APD that include the retirement of Deputy Chief Dianne Gittins and Captain Len Fouch. Police Chief Michael Brown has announced the elimination of the Deputy Chief position and will be conducting a national search for the newly created position of Assistant Chief of Police.

“It’s been quite a year but we’ll move on from this and be better for this,” Huchler said. “Most of my career I have reflected on my failures, but I like to think that I always failed forward. I’ll be able to lead an agency because of my experience here in Alexandria.”

As the Airports Authority Police Chief, Huchler will direct the operations of the police force at Ronald Reagan Washington National Airport, Washington Dulles International Airport and the Dulles Toll Road.

“I knew Dave when he first came on the force,” said former APD Chief Earl Cook. “I watched his career develop and always knew that he would move on to even greater opportunities because of his skill and expertise.”

Huchler holds a bachelor’s degree in law enforcement and a master’s degree in public administration from George Mason University. He also serves as an adjunct professor in George Mason’s Department of Criminology, Law and Society and is a member of the International Association of Chiefs of Police.

“Every day I look at what this city has given to me,” said Huchler of his wife Jackie, who he met while on the job. “My beautiful family, my colleagues — so many have contributed to my success. It has been a wonderful career.”