From art glass to oil paintings to infrared photographs. 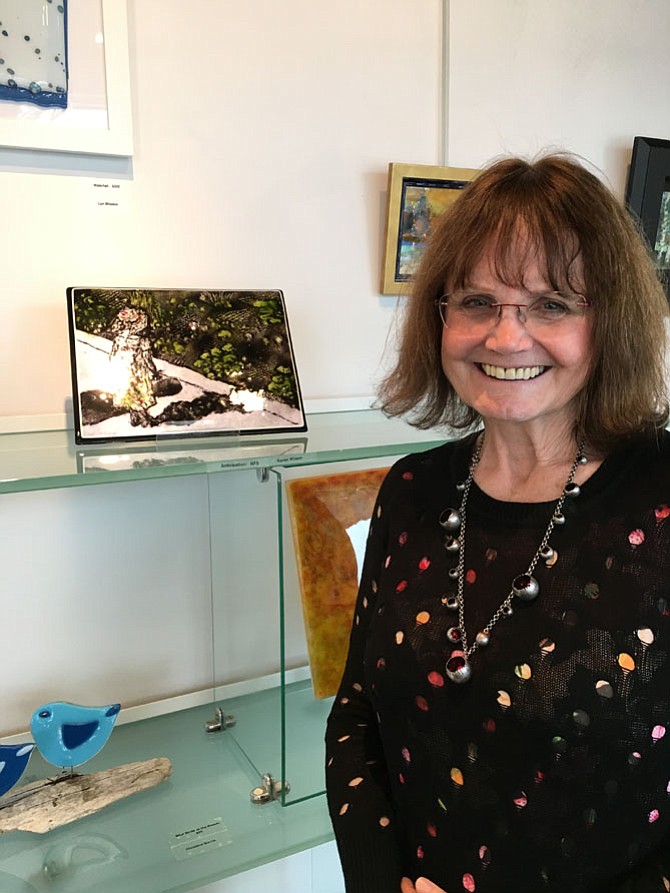 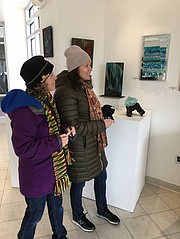 Melissa Jacobs, a visitor from San Diego, and Gina Lagomarsina from Washington, D.C. view the Expressions in Glass 2018 show which opened at the Glen Echo Park Art Glass Center Gallery on Saturday, April 7. 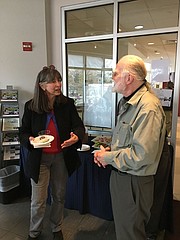 Artist Robert LeMar talks about his work with a guest at a reception for his show “I Draw the Line” at Glen Echo Park on Saturday, April 7.

The park is open year-round, but activity picks up in spring, leading to a full summer schedule. In addition to the art shows, Saturday was also opening day for weekend sales of work by members of the Glen Echo Pottery co-op. The pottery gallery will be open every weekend until December, according to co-op member Hope Wilson.

Galagan, who grew up in Potomac and now lives in Washington, D.C., has taken over the Stone Tower Gallery at the Park for an exhibition of landscape photographs titled “The World of Infrared.”

“The landscapes were all taken using an infrared camera,” she said. “Because I like the way it looks.”

Even without understanding how infrared light affects the result of a photograph, Galagan uses a camera with an adjusted sensor that allows the infrared light to pass through — it is easy to see the beauty of the images she selected for her show. Most of the 23 pieces were taken in the local area, several at the National Arboretum and Rock Creek Cemetery.

Galagan said she does photography other than infrared landscapes but chose those for this, her first solo exhibit, because it is a small show and “I like the way it looks,” she said.

LeMar, of Garrett Park, works in oils and has a showing of 18 paintings on exhibit at the Park View Gallery on the second floor of the park’s main office building. Titled “I Draw the Line,” the works share a common theme not apparent at first glance.

“In this show the artist is experimenting with different approaches to outlining, while seeking to maintain a strong sense of realism,” according to the artist’s statement.

LeMar said he does have a favorite painting in the show. Without hesitation, he chose “On the Dry Sink.” “I like the subtlety of the color,” he said. “I have a tendency to push the color a little bit more, and in this one I held back.”

By far the largest of the shows celebrating their artists’ reception April 7 was the art glass exhibit, “Wild Things” featuring works by members of the National Capital Art Glass Guild.

This show is a juried show with 78 pieces on display, showing many different techniques, Guild member Sue Somerville, of McLean, Va., said.

“We have over 143 members,” she said. “We accepted up to five submissions per artist.”

The final works were chosen using a “blind jury” technique.

Somerville said she has been working with glass since the 1980s. She went to France on a class trip when she was in 10th grade, she said.

She has one piece in the show, stained glass, titled “Wave of Emotion.”

All the current exhibits run through Saturday, April 28.

That is the same day the Glen Echo Park Denzel Carousel opens for the season.