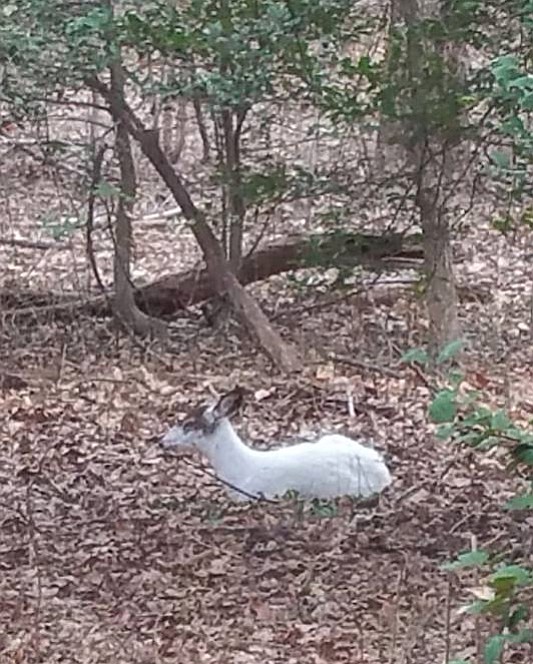 On a recent early morning walk from my home in the South Lakes area of Reston I met a new neighbor that I learned lately moved into the area weeks ago. I would not call the new neighbor friendly; he seemed to be more disinterested in me although his family acted a bit jittery with me being around. While he may not have been interested in me, hundreds have been interested in and curious about him. A photo I took of him that I posted on social media has elicited nearly 400 reactions. I continue to use the male pronoun, but truthfully I am not sure of the neighbor’s gender.

I introduced the new member of our community on social media as being an albino deer, but I was quickly corrected. The almost white deer did not have the pink eyes, pink nose, and pinkish hooves of an albino deer. One neighbor suggested that he was probably a piebald deer. Although I grew up in rural Virginia where there is a lot of wildlife, I had never heard of a piebald deer. That sent me to the internet where I learned that contrary to popular belief, a piebald deer is not a cross between a normal whitetail deer and an albino. The origin of the word "piebald" comes from "pie" meaning "mixed up" and "bald" meaning "having a white spot".

Piebalds have various amounts of white and brown patches similar to a pinto pony, and they have normal brown eyes and nose with black hooves like a normal whitetail deer. Their coloration is due to a rare inherited genetic defect that fortunately affects less than one percent of the white-tailed deer population because it also may result in the deer having short legs, scoliosis of the spine, internal organ deformities and other health conditions.

At the risk of turning this story into another diatribe on my part about the importance of diversity in our community and the need to welcome all, I will end with an acknowledgement that some people do not want another someone in the community who may eat their flowers. It does make me appreciate our trails and natural areas where we can see our animal neighbors. When you see our piebald deer near Snakeden Branch Trail or wherever else in Reston, take a photo if you can and share it on my Facebook page, Kenneth R. Plum. We want him to feel welcome. You might want to call him by the name I understand Terraset Elementary students have given him: Blanca.

By the time you are reading this column I will be back in Richmond for the serious work of the legislature of passing a budget for the next biennium. The outstanding issue to be resolved is the expansion of Medicaid to nearly 400,000 Virginians who do not have health care even though taxes are being collected in Virginia to pay for the program. I support the Governor in his insistence that we approve the expansion. Thanks to all the citizens who have been calling and writing supporting the program. I will be back with details on the budget issue as soon as it is resolved.