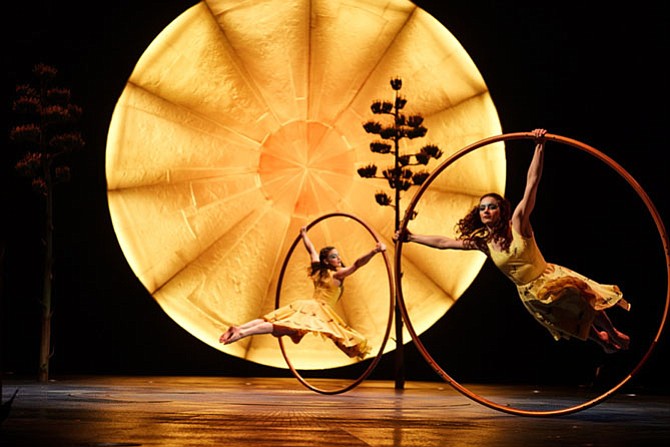 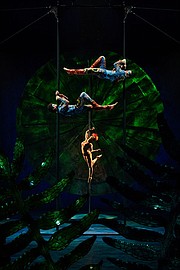 An amazing world awaits patrons as Cirque du Soleil’s newest touring tent show, “Luzia,” is under the famous blue-and-yellow Big Top at Tysons II until June 17, 2018. “Luzia” promises to be a wonderful journey meant to open the imagination as a waking dream of Mexico.

“’Luzia’ aims to bring audiences to a fantastic imaginary world where light and water are blended together,“ said Cirque’s Francis Jalbert. Patrons will travel to an imagined Mexico; a place of traditions and modernity by way of breathtaking acrobatic performances. Some acts are performed high up, perhaps 30 feet or more, while others are at eye level on the stage. The production includes music with a Latin flavor.

The production includes more than 50 performers, more than a dozen bold acts, and a story that connects them. “Performers will be in spectacular costumes with make-up that can take up to 90 minutes to apply before a show,” added Jalbert.

“One of the newest features for the ‘Luzia” show are indoor waterfalls, pouring showers and pools inside the Big Top,” said Jalbert. The water features are used during a number of the acts; often drenching the performers.

During a recent backstage tour, several acts were at various stages of rehearsal. Cyr Wheel artists were warming up; spinning hoops around their bodies with smooth ease. Chinese Pole performers were rehearsing in costume high-up on flexible poles with show lights adding flair to the atmosphere.

Then it was time to meet with one of the fearless “butterflies” featured in the finale. The butterfly was Shelli Epstein, who at 24, is a veteran with Cirque. She began her career as a gymnast living in London. Now a performer with the heart-stopping Swing Team routine, the fearless Epstein “loves the hustle and bustle” of the Cirque world.

Epstein spoke of the meaning of audience reactions to a performer. There is the absolute hush when she is propelled 30 feet into the air from one swing to land on another moving swing. The hush becomes cheers and applause for the Swing Team teamwork when she lands. The entire Swing Team is full of joy and pride that the audiences is thrilled and happy.

Why is Epstein in a butterfly costume? She is representing monarch butterflies that travel from Canada to Mexico each winter. She concluded our interview this way: “This is a dream job. Who won’t want to perform in a circus?”