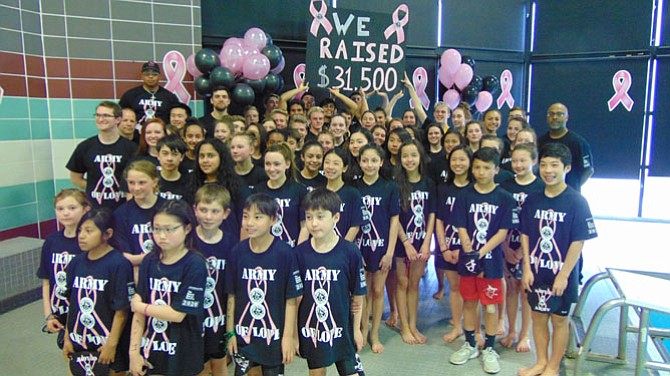 The 60 members of the Shark Tank Racing Squad raised $32,000 for the NBCC Artemis Project for breast cancer research. Photo by Steve Hibbard.

Senior members of the Shark Tank team who were awarded medals include (from left): Cora Lundgren, Ryan McLaughlin, Jamie Quinn, and Emil Robles.

Kealani Nanz of Fairfax Station, who made the breast cancer banner, with coach Patty Friedman.

About 60 members of the Shark Tank Racing Squad, ages 8-18, plus three adult coaches, took part in a swim marathon on Sunday, April 22, 2018 at the South Run Rec Center in Springfield where they raised $32,000 to fight breast cancer. In the eight years they’ve been holding these swimming marathons, they’ve raised a total of $200,000 for the cause.

The swimmers are part of the Potomac Valley Swimming Club and come from seven local high schools: Woodson, West Springfield, Thomas Jefferson, Robinson, South County, Hayfield and Saint John Paul the Great. They are coached by Patty Friedman of Fairfax Station who is the team founder and National and Senior Team Coach.

“There are 60 kids in the water; many are here for their eighth time but there are many that are new. They will swim three to four miles today and their individual efforts allow them to feel the power of what you can do as a person,” said Friedman. “But we gather at the beginning and at the end to celebrate the power of numbers and the importance of bonding with other people and realize when you give, it reflects back on you 1,000 times. There are many of these kids here who have been affected one way or another by breast cancer.”

FRIEDMAN said for seven of the eight years, the money went to the Avon Foundation, which then granted the money out to local organizations. Avon ended the walk this year and so they found another organization to support — the National Breast Cancer Coalition.

Swimmer Riley Allison, 17, of Fairfax, who attends Woodson High School, raised $1,000 with his brother Nathan and sister Hope, and swam 120 laps in the pool – in his fifth marathon. “Today we’re going to be swimming as a team and we all worked together to raise money to fight breast cancer. This money is going to be going toward research for a cure for breast cancer or slow it down and help combat it,” he said.

Swimmer Ryan McLaughlin, 17, of Fairfax, who attends Woodson High, raised $650, and swam 153 laps. “For a month or two now, we’ve been raising money. We’ve been asking family members, friends, neighbors, just anything they’d be willing to donate to help us raise money for the National Breast Cancer Coalition — because it means so much to Coach Patty and she’s been such a role model for me,” he said.

“I wanted to help her. But also, my aunt, my Godmother and my Godfather’s wife, they all had breast cancer. This is a disease that is found in 1 in 8 women, and you never know who’s going to be the next one. It could be your sister, your neighbor, your mother. And so, it’s something that really needs to be taken down. … And it’s helped me realize that I have the power to help make a change — to make a difference,” he said.

Swimmer Jamie Quinn, 18, of Fairfax, who attends Woodson High, raised more than $400, and swam 143 laps. “This is actually my first year doing this, my first time being on the team and this is new to me. [Coach Patty] is always giving back and I’m so grateful to be part of this. My intent is to raise money and inform people about breast cancer awareness,” she said.

Swimmer Alejandro Rodriguez, 17, of Alexandria, who attends Hayfield Secondary, raised $500, and swam 153 laps — his eighth marathon. “Each year, every time I take part in the marathon, Coach Patty always instills upon us the values of not only being the ones to talk about making a difference but being the leaders to truly take a step and make a difference. And it’s amazing to be able to make such a difference, not only with peers, but with younger kids to change the world.

TO SUPPORT the Shark Tank Racing Squad, their fundraising page is: www.tinyurl.com/2018armyoflove.